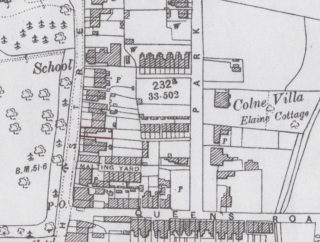 DEEDS RELATING TO 82 (FORMERLY 28) HIGH STREET, WIVENHOE IN THE COUNTY OF ESSEX

1) 22 December 1876 Citing the Admission of Edmund Round Esq of the Inner Temple, Barrister by the Manor of Wivenhoe with its members

The earliest reference in this document is to the 28th day of April 1860 when the property appeared to be in the hands of George Miles Rayner of Wivenhoe, Master Mariner, and occupied at various times by his tenants, John Newton and Benjamin Chapman, then William Moulton and Benjamin Powell and later by William Whitley Cole and [blank] Sainty.

The property was then described as two messages or tenements (formerly one messuage) in Wivenhoe having a frontage next to the road of thirty feet, together with the yard and garden behind of the width of twenty six feet situated on the East side of the road leading from Wivenhoe Hall towards the Church and extending from the said road back to the Shrubbery and ground late of William Brummell Esquire. There is also a reference to the appurtenances to the said messuage and tenements belonging or appertaining to the only use of John Stuck Barnes of Colchester in Essex, gentleman, in Trust.

However the Conditional Surrender (see Footnote) by the Lord of the Manor to George Miles Rayner was made void  after his failure to make payments relating to a loan of £150 made by the trustees of the Colchester Permanent Benefit Building Society (cited as Stephen Brown, Edward Williams, Robert Adams Newman and Jeremiah Haddock).

This seems to have been followed by a delay of some months because although Edmund Round is recorded as purchasing the property on 30th June 1876 it appears that in order to enable the Trustees to carry out the said sale, John Stuck Barnes was on the 12th December 1876 out of Court admitted as tenant of the forfeited Conditional Surrender and then nine days later on the 21st December 1876 surrendered the property back to Sayers Turner the Steward of the Manor. One day later on 22nd December 1876 it was finally surrendered to Edmund Round.

Enrolled in the Court Books of the above Manor 4th January 1877 by Sayers Turner, Steward.

This Indenture records the payment of £43. 12s and 6d by Edmund Round (described as a tenant of the Manor) to Nicholas Caesar Corsellis, Lord of the Manor, which enfranchised and released the property to Edmund Round according to the Copyhold Act of 1852  (see Footnote).

This Indenture records the sale of the property to William Charles Harlow for the sum of £114 in fee simple. It also refers to the fact that the existing messages or tenements earlier described had lately been pulled down.

5) 1941 Abstract of the Title of the Trustees of the Will of William Trayler deceased to a freehold messuage and premises situate in High Street, Wivenhoe, Essex

The Conveyance between William Henry Harlow of Wivenhoe, Mariner and William Traylor (later referred to as an incorrect spelling), Master Mariner following the death of William Charles Harlow. [A pencilled note in the margin indicates that Sarah Ann Harlow widow of William Charles Harlow died 8 July 1893. A second pencilled note referring to the marriage of ? Mitchell to Harlow’s grandaughter]

By his will of this date William Traylor, after directing payment of his debts and funeral and testamentary expenses, appointed his brother Joseph Traylor (sic) and Thomas William Goodman, Executors and Trustees. He bequeathed unto the Trustees ‘All his real and personal estate Upon Trust to sell and convert’ amplified in an additional handwritten note which stated ‘such parts of his real and personal estate as might not consist of money and with and out of the proceeds to arise from such sale etc to pay to his wife the sum of £300 as therein mentioned and to to pay his debts etc and to invest the residue upon any authorised Trust Investment and to pay the income thereof to his wife for her life as long as she remained a Widow And after the death of his wife to divide his Trust Estate between all his children who should be living his decease in equal shares power of postponement of Sale of his house’

Following Joseph Trayler’s death on 12th November 1915 Thomas Goodwin wished to appoint Gerald William Trayler as Trustee in his place both for the property in question described in the First Schedule and the Stocks and securities described in the second Schedule. G W Trayler thereby consented to be a Trustee accordingly. It was declared by the said T W Goodwin that the estate and interest then vested in him in the freehold hereditaments described in the First Schedule and in all other (if any) the freehold or leasehold hereditaments then subject to trusts of said Will should vest in said T W Goodwin and G W Trayler upon the trust and with and subject to powers and provisions of said Will. It was also declared that Stocks and securities described in the 2nd Schedule when transferred should be held by T W Goodwin and G W Trayler as joint tenants upon trusts of Will

The First Schedule referred to

The Second Schedule referred to

Investments not the subject of this Abstract

Deed of Appointment of this date made between Gerald William Trayler of 108 Newlands Avenue, Shirley, Southampton Marine Engineer of the first part Thomas William Goodwin of Wivenhoe, Postmaster of the second part and Clifford Trayler of ‘Semiramis’, Ipswich Road, Colchester, Engineer, of the third part. T G Goodwin desired to be discharged from the trusts of the Will of the said William Trayler and Clifford Trayler was appointed in his place.

Conveyance of a messuage and premises situate in High Street, Wivenhoe in the County of Essex between Gerald William Trayler of 108 Newlands Avenue, Southampton, Hants, Marine Engineer and Clifford Trayler of “Semiramis”, 319 Ipswich Road, Colchester, Essex (Trustees of the will of William Trayler deceased) to Mr Arthur John Thomas Atkinson of East Street, Wivenhoe, Butcher, for the sum of £430.

Supplementary Abstract of the Title of Mr Arthur John Thomas Atkinson to No 28 High Street, Wivenhoe, in the County of Essex

Conveyance of “Denhurst”, 28 High Street, Wivenhoe in the County of Essex between Arthur John Thomas Atkinson (Retired Butcher) of Worby Dene, The Avenue, Wivenhoe to Beatrice Mary Cook of 79 Winncok (sic) [Winnock] Rd, Colchester, Essex for the sum of One thousand and fifty pounds

Abstract of the Title of Mrs Beatrice Mary Cook to “Denhurst”, 28 High Street, Wivenhoe in the County of Essex noting at the end a certificate of value of £3,000

Conveyance of freehold property known as No 28 High Street, Wivenhoe in the County of Essex between Beatrice Mary Cook, wife of Lewis Cook formerly of 79 Winnock Rd, Colchester but now of “Denhurst”, 28 High Street, Wivenhoe and Frederick Stanley Goodall of Messines Rd, Colchester in the County of Essex at the price of Two thousand six hundred pounds

Conveyance of the Freehold Property known as “Trisenbu”, No 28 High Street Wivenhoe in the County of Essex between Frederick Stanley Goodall of 28 Hamlet Rd, Haverhill, Suffolk, Publican and Noel Iveagh Carter of Hall Farm Bungalow, Moveron’s Lane, Brightlingsea, Essex and Freda June Carter, his wife at the price of Three thousand eight hundred and fifty pounds

Conveyance between Noel Iveagh Carter of 82 High Street, Wivenhoe in the County of Essex and David Lockwood and Leonora Lockwood, 186 Huntingdon Rd, Cambridge at the price of Five thousand seven hundred and fifty pounds

Copyhold was the ancient form of manorial tenure where property was held either directly from a lord of the manor or from one of his tenants. Copyhold land transfer was recorded in the manor court rolls and a copy serving as his title deed given to the purchaser, hence the term copyhold. To transfer property it was first surrendered to the lord who then admitted the new tenant, upon payment of a fee, termed a fine.

Copyhold land could be converted into freehold land by the Lord of the Manor. This was done either by including an enfranchisement clause into a deed of conveyance, or by a separate deed of enfranchisement.

Enfranchisement transferred the land from the Lord of the Manor to the new owner. The new owner paid a consideration (fee) for the transaction.