Considered a very desirable residence when it was built in 1870 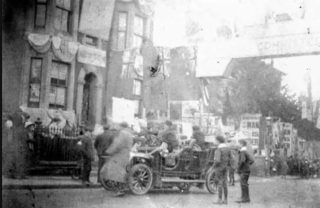 Gothic House was built in 1870 and was considered a very desirable residence. It had a number of notable residents, especially in its early days.

Dr Kevern, the town’s medical officer lived at Gothic House between 1918 -1932.  Before that, it had been the Conservative and Unionist Party headquarters for Harwich and District.

Notable local Conservatives of the time were Charles Gooch, John Bawtree Hawkins, and Dr Samuel Squire. Newton was the MP

At election time there were banners with lights attached strung across the High Street and on voting day there would have been a steady stream of people and carriages. Some party members used their carriages to bring people in to vote, especially people who would have had to come from Rowhedge.

It was a lively, celebratory occasion for the election winners. In 1910, with a Conservative victory, rockets were fired from several of the big yachts that were berthed on the river.

Thomas Corder who was living at Gothic House when he died in 1900, was a member of the Board of Guardians of the Union Workhouse.

He was also Secretary of the group who were responsible for setting up The Nottage. At one point he was authorised by the Committee to enquire about renting the house next door to the Black Buoy as premises for setting up The Nottage. At the time he was landlord of the Black Buoy. When Thomas died, his wife donated the clock bell to St Marys Church in memory of her husband. A brass plaque was erected in St Mary’s in commemoration of Thomas and the donation of the bell to the Church.

More recently, Dr Walter Radcliff lived there and for a time ran his medical practice from Gothic House.