The High Street was full of people that day exploring it as it was 100 years ago.

From an idea which germinated slowly some two years ago, Gill Strudwick and Helen Polom have led a team of people who helped research many of the properties from the top of the High Street down to Anchor Hill.  The High Street Heritage Trail was launched on Saturday 15th September 2018, which turned out to be a wonderful sunny day that added to the atmosphere of the event.

Hundreds of people visited the High Street not just for the Trail but the Wivenhoe Market was also launched that day, taking the place of the previous Farmers Market, and with the annual Wivenhoe Crabbing competition taking place on the Quay. Various places were also open as part of Open Studios, including the Nottage for an art exhibition.  John and Sheila Foster opened the Wivenhoe Chapel Museum, in the middle of the New Cemetery, for the last time this year and received 40 visitors, a record for this summer.  Wivenhoe was just buzzing.

Visitors for the Trail were able to pick up a souvenir pamphlet at one of two Information points – one at The Folly, opposite the hairdressers at the top of the High Street, and the other place was in the churchyard. 500 pamphlets had been printed giving a map and highlighting some information about the properties, and were all taken during the day.

All of the 40 properties which had been researched had a board outside the property on which people could see a photograph of it from around 100 years ago together with some text about the history of the property. A QR code on each board allowed people with Smart phones to use the code to look at more details about the property and in some cases more pictures of it by going to the page on the History Group’s web site. The list of all the properties in Trail is available is available by clicking here.

Joan Sawyer had devised a picture hunt for children to complete on their way round the Trail which was much enjoyed by the many families who showed up. Children from Broomgrove Junior School choir also performed in the afternoon for a large crowd which gathered at the Wivenhoe Library to hear them.

As well as the many local residents who came, there were many people from outside of Wivenhoe who had seen the pre-event publicity. Apart from being an enjoyable event, many people said they had learnt a lot more about Wivenhoe which was of course the principal aim of the Wivenhoe History Group

Below are some of the pictures which were taken the day. Several of the High Street Research Team dressed up in period costume for the Trail Launch. The full list of people involved in the Project included:  Gill Strudwick (Joint Project Leader) and Helen Polom (Joint Project Leader) with principal team members:  Sue Glasspool, Joan Sawyer, Frances Belsham, Pat Marsden, Ian Valentine, John Foster, Mike Harrison, Eric Strudwick and Peter Hill with the help of others including Mike Downes, Chris Snow, Jenny Heaps, Jane Stanway, Sheila Foster, Louise Coleman, Clive Dykes, Pat Green and Michael Smither. John Stewart was also a member of this team until his early death part way through the project and in whose memory the Trail is dedicated.

Thanks must go to the three Borough Councillors who shared part of their CBC Locality Budget (Cllrs Mark Cory, Cyril Liddy and former Cllr Rosalind Scott) as well as last year’s Town Mayor, Cllr Mike Newton, who added a contribution from the Wivenhoe Mayor’s Fund, plus a donation from  Wivenhoe News, so that our event could be properly appreciated and enjoyed by so many Wivenhoe residents for free. Thanks also to Alison Stockmarr and Vince Rayner for their professional services who freely donated their time  that enabled us to produce such an informative souvenir leaflet.

Peter Hill, Chairman of the Wivenhoe History Group, said “Gill and Helen worked so hard to make this Project a real success, and it was just that with so many nice things said by visitors throughout the day. They were backed up by a really good team of people who contributed in lots of ways, and of course, the High Street Heritage Trail will remain on our web site available for people to see for ever more”.

To STEP BACK IN TIME to see the High Street Heritage Trail leaflet and the index of all the properties which were listed as part of this Trail, click on this link. 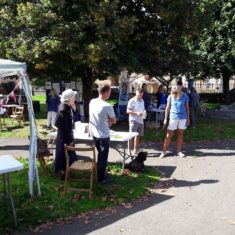 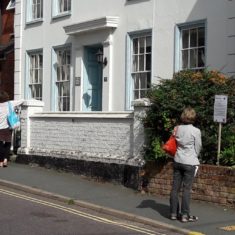 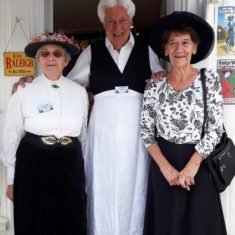 Peter Hill, dressed as Jimmy Moore, the grocer, standing in the doorway of The Bookshop, once David Bones, the cycle repair shop, with Pat Green (left) and Betty Tonkins.
Sue Finn 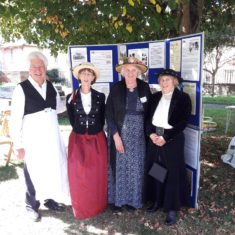 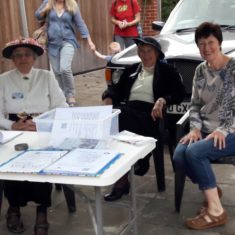 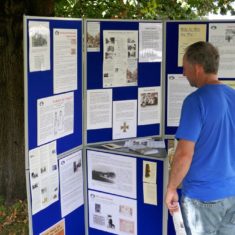 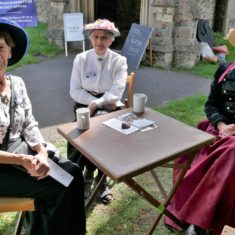 People enjoying a break in the churchyard
Dick Polom 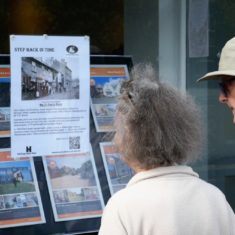 The estate agents was once Parr's Bank.
Dick Polom 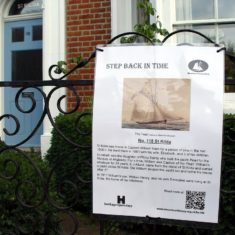 Why no 118 is called St Kilda took Frances Belsham a lot of researching.
Jason Cobb 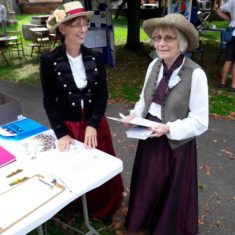 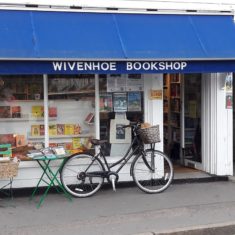 Sue Finn, owner of the Wivenhoe Bookshop, once the cycle repair shop run by David Bones, got into the swing of the day.
Peter Hill 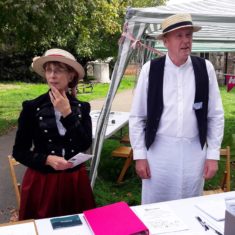