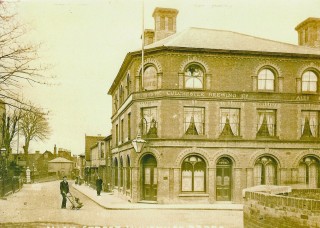 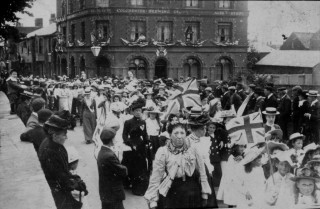 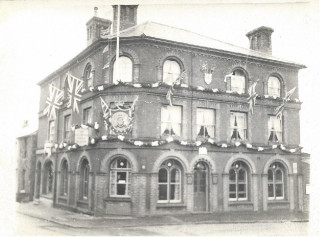 The Grosvenor was built in 1865 by John Eade soon after the railway arrived here.  It was an obvious place for commercial travellers from London to stay.  It is thought that the name Grosvenor was chosen because it is the family name of the Dukes of Westminster and so sounds superior.

In 1900 it had a flagpole like many pubs in the heyday of the Empire. We know that Henry Bow was the landlord about this time and had his name written in large letters on the front of the building.

There are many rumours about the pub including that the cellar was haunted and that upstairs there was a brothel, which isn’t surprising as Wivenhoe was a busy port with lots of sailors. (See the two girls looking from an upstairs window).

In May 1937, it was decorated with flags to celebrate the Coronation of George VI.

In its later years, one of the doorways was changed to a window and, as it was in a good position, the men would sit on the diagonal window sill which looks up & down the High Street and down Station Road so they could see all that was happening.  It is said spikes were put on the sill but that did not deter men from congregating on that corner.

Read more about The Grosvenor in its later years – click here