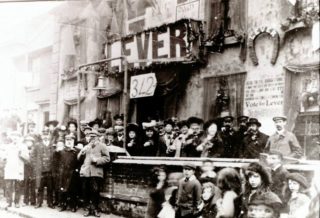 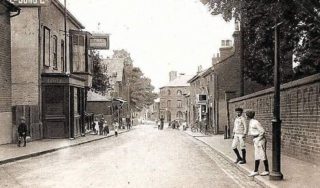 The writing on the wall facing Queens Road, by the White House, said: “In Levy we trust with Peckham go bust” - 1906
Wivemhoe Memories Collection 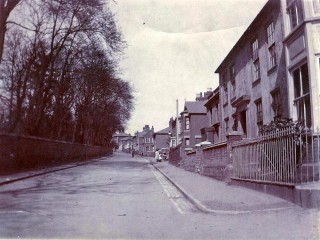 Since the 1900s this house has always been known as the White House. In the years between 1870 and 1885, there was a small school behind the house.

In 1906 it was the Liberal Party Headquarters, and it was in this year that there were great celebrations as their candidate A. Levy Lever was elected MP for the Harwich Constituency, defeating the Conservative candidate by 342 votes. (See photographs on the right).

The writing on the wall almost opposite the White House says  “In Levy we trust with Peckham go bust” (second picture). This today is the entrance to the public car park.

In the third picture, the White House has the brick wall and the portico over the door.

In 1910, the result of the election that year resulted in a Conservative candidate being elected MP for the area.  According to Nick Butler ‘ the General Elections were extremely lively but essentially good natured affairs’.

Note:  It was not until 1918 that women of 30 years and older and who met minimum property qualifications were allowed to vote. Then in 1928, all women over 21 years of age were given the right to vote on equal terms with men.