Originally a part of Wivenhoe Hall 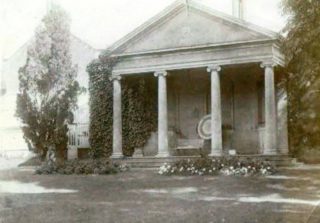 The columns and portico which were added onto the rear of the gardener's cottage. The picture shows the archery target under the portico.
Wivenhoe Memories Collection

Wivenhoe Hall Folly was originally the gardener’s cottage to Wivenhoe Hall. Local people called it the Summer House or The Old Hall Cottage.

Wivenhoe Hall itself dates back to the 15th Century and we believe it was occupied by the Corsellis family until 1884. You will see other evidence of the Corsellis family in lower Wivenhoe. In our red brick wall fronting the High Street is a sandstone brick carved “1841, NCC”. (We believe this was Nicholas Caesar Corsellis).

The ‘Folly’ elegantly disguised the groom’s quarters; originally, there were no windows or doors to the south elevation, which overlooked the extensive grounds and views down to the river and beyond. The east and west “wings” were modern additions. The portico can be nothing other than a flight of fantasy by the then owners, hence our term “Folly”. The photo shows it was used for archery practice.

We have been unable to date the building precisely, but it must have been during the ownership of the Corsellis family, and we would guess Victorian but in the Gothic style. It has splendid, vaulted red brick, full height cellars in three bays, currently used as an office and party room!

We bought “The Manse” in 1984 and used it as offices until we began the conversion into our home in 2004.

The Gardener’s Cottage along with the Gate House (on the corner of De Vere Lane and the High Street — beside Wivenhoe Garage) are believed to be the only surviving buildings from the Wivenhoe Hall Estate. Disappointingly, Colchester Borough Council has given permission for the Gate House to be demolished.

The Hall was eventually dismantled in 1927 following the breakup of the Hall Estate, by sale at auction.  The gardener’s cottage formed part of Lot 9.

Read more about the auction of The Gardener’s Cottage here

Read more about The Gardeners Cottage after the auction here