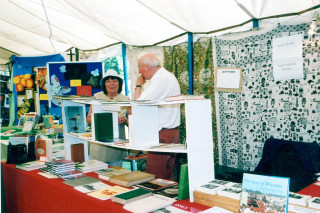 Pam Dan with Mark Paterson at Mark's book stall in the 2003 Wivenhoe Tent at the Tendring Show.
Photo by Peter Hill

Little Wick [38 High Street] is a listed property and one of the older ones in the lower part of the village. It adjoins what used to be the ancient Falcon Inn.   Although listed erroneously as Victorian, it is in fact very much older and is thought to be at least as old as 1750.   The original building has beams, wattle and daub over a timber frame with a Georgian front facade.

Dr William Dean, from whom Mark Paterson obtained the property around 1979, told of a story that went around the village at the time that Little Wick was occupied by a mistress of George II who used to visit the estuary in his yacht and she would slip on board to see him.  It is known that the then King visited the area in his yacht but we have no other information.

Little Wick has a sister larger house in the Vicarage which it echoes and the two are divided by Alma Street from the High Street.

During the last war Little Wick was used as Council Offices and in the garden bordering Alma Street was a public lavatory.

After the war, Little Wick was purchased by Dr William Dean and became both his home and surgery. His wife, Marjorie, was very much into antiques and converted the front area of the house by removing the hall partition and installing some fine carved wooden pillars. These she brought from a London medical bookshop that was being dismantled. This gave a special elegance to area with its sweeping staircase.  She used this area as a showroom for the antiques she was offering for sale.

Although Mark Paterson arrived after she had died, he was told she used to offer visitors a glass of sherry there on Saturday mornings.  In the meantime Dr Dean had bought the much larger Wivenhoe Old Rectory where he could indulge his passion for gardening and croquet.

And speaking of old rectories, Mark Paterson, as the new owner of Little Wick came from Bishop’s House [the old Frating rectory] where he had been, having moved there from Canonbury Square in Islington.

Mark, a literary agent by profession representing Sigmund Freud and others, escaped from London for a better quality of life and lower expenses. He first had an office in Colchester’s West Stockwell Street in the historic house originally occupied by Jane and Anne Taylor [of Twinkle Twinkle Little Star fame].

From there, he rented a brand new office in Brook Street, Wivenhoe, carrying on his business there for some twenty years as well as doing some publishing and bookselling. It was during this time that, as Quentin Books, he published Nicolas Butler’s Story of Wivenhoe.   This was a huge book of more than 400 pages and 200 illustrations and had an immediate success having to be re-printed at once.

Mark’s agency business was merged with a London one and in 2003 he closed the Wivenhoe Brook Street office and carried on his end of the business in Little Wick. He also sought to expand his second hand bookselling which involved specialties such as psychology, marine, natural history, books about books, Essex and East Anglia, political biography, and history.

Mark is a member of the Wivenhoe Society, TWITS, supporter of the Engine Shed Project, the Shipyard Project, and also member of the Essex Wildlife Trust, and many other organizations.    He is currently the Warden at the John Weston Wildlife Reserve at the Naze.

Note:  This was written by Mark Paterson in August 2004 and was first published on the Wivenhoe Encyclopedia in 2004