You are here: Home>Topics>Streets>Queens Road>Car Crashes Through the Front Wall of No 30 Queens Rd

Car Crashes Through the Front Wall of No 30 Queens Rd

The driver came down Park Road and went straight on! 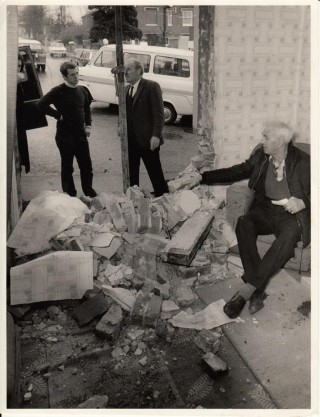 This is one of Helen Barrell’s family photographs, probably first reproduced in one of the local newspapers. She recalls that “The house with the car in the front room belonged to Auntie Agnes and Uncle Bert Waldock – Agnes was grandad’s sister. The house was in Queen’s Rd, the woman who I think was Mrs Parrot came down Park Road and went straight on.”

“My Dad, Paul, says it has to be 1974 or later, as he joined Kembles into 1974. He’s the younger man standing outside the house – he’s talking to Les Kemble (his uncle) who ran Kembles the builders. And it’s Bert Wenlock sat in his chair. Although saying that, I’ve got a year of death of 1972 for Bert, so it might be earlier. It may have been that although my dad wasn’t working at Kembles then, he was summoned to help because Bert was his uncle too! It’s definitely early/mid 70s though (then again, the date of death I have for him might be wrong, as I pulled it out of an index…).