You are here: Home>Topics>Streets>Queens Road>Maria Redman: Childhood Memories - Bells and the Nook 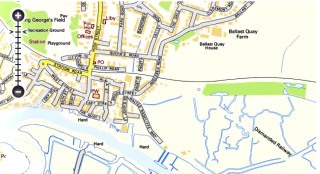 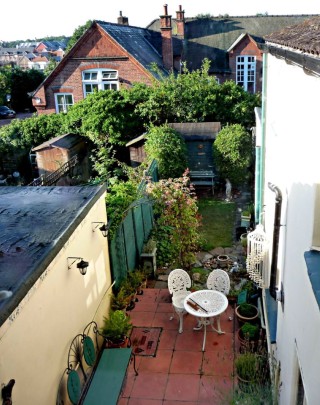 My first school from our back garden... no excuse for being late! It stopped being a Junior school the year after we left to start senior school in Colchester. All the kids were then moved to Broomgrove.
Maria Redman 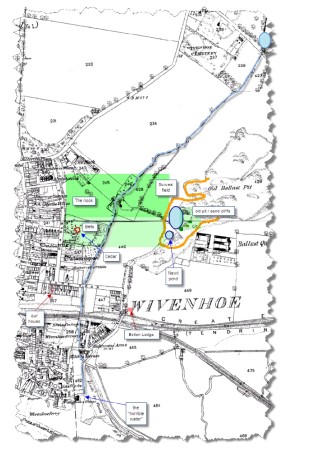 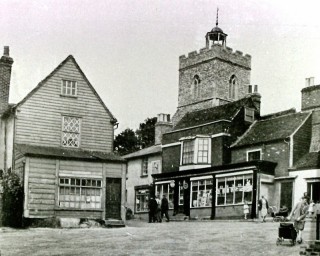 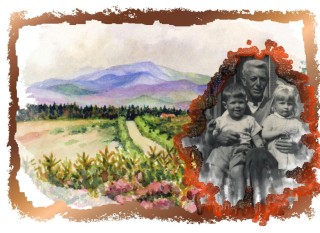 From L to R: cousin Mark, Grandad and me set against one of Grandad's watercolours
Maria Redman

I was interested to read an article on the QRRA (Queens Road Residents Association) website on the subject of the Wivenhoe brook. As a child born and growing up in Wivenhoe (before the desecration of estate building which destroyed our beloved idyllic playground), this stream was a part of our world. My cousins and I were there most days, roaming the wild areas we knew as “Bells”, “The Nook” and “Bowes’s”. It is a great sadness to me that they are gone forever and at the time we were horrified to witness the devastation of the land and the entombing of the stream. As children, we were powerless to prevent this “progress” at the time and small acts of rebellion (sneaking over to the muddy warzone after the workmen had gone for the day to throw their tools in the mud) did little to console. The various ruinations of old Wivenhoe which were and still are heaped one upon another over the years made me glad to leave. Even these days when I visit Wivenhoe, I can’t look at Valley Road estate and Dene Park without that mixture of resentment and remembered pleasure welling up. Seeing the great Lebanon cedar behind No 18 Park Road particularly stirs memories – it is the one majestic legacy of that place and time of childhood delight. A focal meeting point for all the kids. The bravest of the boys would climb to the very tops and gaze out over the woods and fields like lookouts in a high swaying crowsnest.

As soon as school was over, I would run home (which took all of 3 minutes from Phillip Road round to Queens Road), scramble out of the hated school uniform and into my play clothes then dash the short distance over the flint and gravel surfaced Park Road to “Bells” which was entered off Park road opposite Colne Terrace. There was an old concrete base there (all that was left of a pre existing building), then I was in the wild haven of a former garden long gone wild – scrub elder bushes, a huge mulberry tree, various apple trees (which grew small hard green apples – shudderingly tart to eat) and a deep profusion of trees, bushes, grasses and plants. Over to the big tree to see if my cousins were there yet… Down the beaten path to the stream to see how deep and fast it was today.. maybe catch some shrimps or small fish, then back up through the long grass and through the nook with orchards, raspberries, blackberries and gooseberries rambling everywhere.

The kids who frequented this domain included the appropriately named Sparrow who posessed the awesome ability to catch and charm wild birds. Jamie and David Chable lived in Colne Terrace, the Heards – Josh was my age, Sam older (and therefore above our station), the Payne boys, and Phil and Mark my cousins, lots of others who came and went. The land didn’t belong to us, but we belonged to it and loved it. Maybe we’d make a den in the denser part of Bells further down or enact some imaginary plot using elder branches as “rifles” or “swords” in epic adventures. We might also climb over into Bowes pasture field go steeply up following the line of the fence to the crest of the rise heading in the direction of Ballast Quay. Just over the brow of the field there was a sandy flat area and to the left a great cliff of orange sand rose impressively with a crown of grass pines towering over a dark lake which bent round to the right. To the right of the flat area was a rather stagnant pond – absolutely guaranteed to have a good population of newts – we would spend ages trying to catch one – 99% unsuccessful in our endeavours. They were beautiful creatures but elusive.

I remember one of our expeditions was to follow the stream from the lake at the bottom of Rectory Hill all the way to the river. This we did all through the valley following the field boundary on Bowes big field, pausing only to “rustle” some of Farmer Bowes cattle, before climbing the fence and dropping down through the bottom of the nook and Bells to the intersection with Queens Road then pressing on through the deep silty water (we crawled through the pipes under the road!), we were foiled by a grating at the railway crossing, but re-joined the water on the far side of the tracks. Screwing up our courage we fought through the pipe which went under the road and past the fire station then followed the stream straight through the shipyard to the wet dock where the water spewed out into the dock from a culvert with a tidal hatch to prevent back filling from the river. We were in trouble for the state of our clothes when we finally made it home… and we were very, very wet – the wellies were just not up to it.

When I was very young my grandad and I would come to the shipyard from Anglesea Road on our regular walk together. The wet dock where the water from the stream spewed into the mounds of deep oily river mud was a fascination, and was gleefully dubbed “the horrible water”. After staring at the morass for a while and wondering exactly how deep it was, we would wander along to the quay, then up Anchor Hill, to pay our ritual visit to “bottom Rileys” where I would be spoiled with sweets. Then through the churchyard, up the High Street, down Queens Road (past “top Rileys” – where Pam Dan now lives), up to Anglesea Road and back for strong, hot and incredibly sweet tea and the devouring of the sweets at Bolton Lodge.

Once such a big chunk of the magical green heart of this special place was ripped out, nothing seemed the same. Coinciding with the arrival of teenage upheavals, the miserable attentions of local bullies and the deeply felt pain and loss of my dearly loved grandfather, childhood retreated into cherished memory and time continued to grind forward, trapping and crushing the present beneath it’s relentless progressive cogs. In the same vein, how odd and sad it seemed later, to see the towering cranes of Cooks shipyard toppled, and hear and feel the silence. The thrumming, booming, working heart of the Wivenhoe of my childhood stilled. This was followed inevitably by abandonment of the area to developers – the end of the last Wivenhoe shipyard brought the memories flowing back.

Great days and good memories… I’m so glad to have had that independence, space and freedom early on. We just scraped in there before the compensation culture was imported and media-hyped scare stories arrived to freeze imagination and fun in their tracks, or at least, channel their energy via the nearest pc. Ironically computers and the internet are now a very important part of my life satisfying curiosity and facilitating creative aspects of my personality as well as enabling me to earn my living. Life goes on; human beings ever adaptable, selfish and persistent – like weeds in the garden we seek to smother.