Description of the road built on the former Wivenhoe House Estate 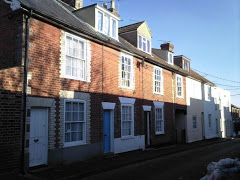 Queens Road is in the lower part of Wivenhoe and branches to the east from the High Street opposite King George V Playing Field. It comprises mainly red brick, slate-roofed two-storey terraced cottages lining an extremely steep and narrow v-shaped hill running east-west with good vistas in both directions. Many of the houses were built in groups of two, three or five with a wide variety of period features such as sash windows and door-cases. Most still have their chimneys. Some have passage-ways with rights of access to the rear. There are some newer built houses towards the dip in the road where the Brook runs under a small bridge and alongside Paget Road. Most of the houses are in the Wivenhoe Conservation area and those which are not were recommended to be included in the Wivenhoe Conservation Area Appraisal carried out in 2007. The road was added as a vista to the Wivenhoe Local List in March 2007. The Brook and the Pump House were also included as heritage assets.

One building is on the National Heritage Register. This is listed building no LB421654 comprising No. 2 Queens Road and No. 64 High Street which were once a single building; originally an C18 and earlier house, but this was extended and subdivided in the C19 and C20. It comprised two units by 1874 and there have been a number of alterations and extensions.

The road was laid out largely on the site of the former Wivenhoe House Estate from the early 1860s onwards, following the demise of the owner, William Brummell (the brother of Beau Brummell) and his wife Anne. Thomas Harvey, a local ship-builder purchased the house; dismantled the contents piece by piece to be sold at auction; and the estate was divided into 84 plots. The first houses on the road were built circa 1864. They were mainly occupied by mariners in the nineteenth century when the fishing and ship-building industries were extremely active. There was a post office (on the north-west corner of Queens Road and the High Street and for many years an ironmongers shop on the south-west corner. There was a pub at No 9 called the Old Shipwrights (later Anglesea Arms) and a village shop at No 17. Francis Bacon, the acclaimed artist, had a studio at No 68 Queens Road for many years.

The Pump House was an important building for Wivenhoe situated in the dip in the road next to the Brook. It has recently been extensively renovated and has a verdant setting nestled between two hedge lines. There are Tree Preservation Orders (TPO) on two ash trees. In 1901, while boring for water in the dip of Queens Road, Wivenhoe Urban District Council (WUDC) found water at a depth of about 150 feet estimated to produce 6,000 gallons per hour. The quality was deemed satisfactory and in 1902 the WUDC opened a waterworks at Queens Road to pump water from the borehole to a water tower (LB461947) in Tower Road, west of Wivenhoe Cross.

The Auction Documents and Plan for the disposal of the Wivenhoe House Estate are held at Essex Record Office, 1861, D/DU 225/14.