Who Lived at 26 Queens Road? 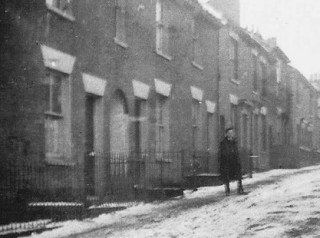 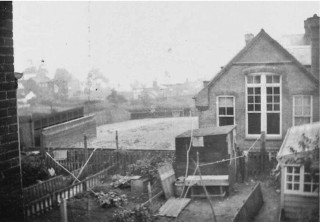 Back gardens of Nos 26 and 24 Queens Road 1894 showing the Phillip Road School to the rear.
Wivenhoe Memories Collection 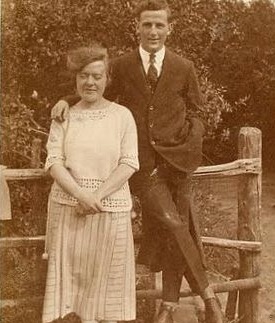 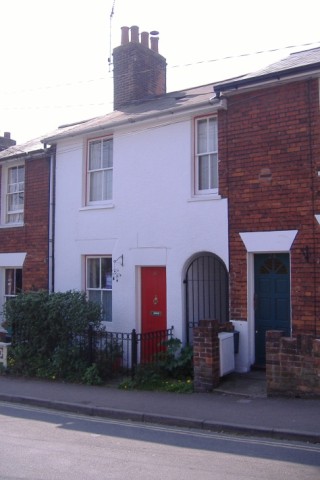 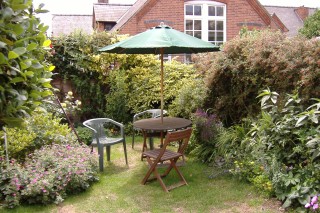 The land on which this and neighbouring properties was built was originally part of the Wivenhoe House Estate see here. The mansion was demolished circa 1861 and the estate sold to Thomas Harvey, the local ship-builder who divided it up into building plots.  In the early years 26 Queens Road was sold as a parcel of land that would eventually contain 5 ‘messuages’ or ‘tenements’. Later the plots were divided into twos and threes, and eventually as single plots, as they are today. No 26 was also known at one stage as No 3 Portofino Cottage.

The plot on which the five houses were to be built was first conveyed in 1861-2 following a number of Indentures and agreements between William Brummell’s daughters and Thomas Harvey as itemised in the first deed below.

Indenture of Conveyance of this date between John Bawtree, George Henry Errington, John Bawtree the younger and Jeremiah Haddock [the bankers] (1)Thomas Harvey (2) John Eade (the builder) (3) and Edward Williams (4). See here to view the deed in full.

The First Reference to the Five Messuages or Tenements erected by John Eade.

Indenture of Mortgage made between John Eade (1) William Alfred Neck and George William Dennis (solicitors) (2) for £300.

Indenture of Mortgage made between John Barr (mariner) (1) and Timothy Gall (yeoman) and Daniel Bacon (stonemason) (2) for £225.

Indenture of Transfer of Mortgage made between Timothy Gall and Daniel Bacon (1) and John Wright (2).

Indenture of Reconveyancie of this date made between Joseph Brabook Daniell, Maria Frost and Herbert Cant (1) and John Barr (2) and John Bawtree (3)

Indenture of Conveyance of this date made between John Barr of Essex (mariner) (1) and William Willis of Clacton-on-Sea (piermaster) (2).

And whereas the said John Barr hath agreed to sell to the said William Willis the said tenements at the price of £525.

All that piece or parcel of Freehold land situated in the Parish of Wivenhoe aforesaid abutting in the New Road there called Queen’s Rd leading from Wivenhoe Street to Page (t) Street and containing a frontage next to the said street of 64ft.

And also those five messuages or tenements recently erected thereon together with the unrestricted use of the New Rd there called Queen’s St (sic) as the same premises abut North on Queen’s St aforesaid, East on a piece of ground of James Bates, South on the Railway and West on a piece of ground belonging to George Lay, which said messuages or tenements are now in the respective occupations of William Forsgate, Joseph Phipps, Thomas Southernwood, Thomas Bennett and one Turner, and all ways, watercourses, rights, easements and appurtenances to the said hereditaments etc, etc.

To the use of the said (property) William Willis doth hereby declare that his Widow if any shall not be entitled to dower in or out of the said premises or any part thereof.

Robert Willis of 468 Cable St situated in the County of Middlesex (mariner) of the one part and Sarah Willis of Clacton on Sea (widow) of the other part. Whereas William Willis late of Clacton died on 12 March 1892, Sarah was not left the property in his will so it passed to Robert the eldest brother of William and his heir at death. However, Robert being convinced it was the will of William to leave his wife the whole of his property, then agreed that in consideration of a yearly rent of £39 pounds payable to Robert for his life, and by family arrangement, that he would convey two of the tenements to Sarah and her heirs.

Conveyancing of No 3 Portofino Cottage, Queen’s Rd between Mrs Sarah Willis and her sister Jane Goodridge

Sarah died on 12 November 1903 and left No 3 to her sister of 21 Wimpole Rd, Colchester. William Munson and the Rev Franklyn Tycer were appointed as executors and trustees. The conveyance mentions that should there be any drains, watercourses, wells or pumps or other easements which might be used in common by the tenants or occupiers these should be held by the respective owners subject to and with the benefit of such easement.

It is noted that No 3 has a frontage of 12ft and a depth of 78 feet and that the house is currently in the occupancy of Mrs Elizabeth Willis and it abuts onto property lately belonging to the estate of the said Sarah Willis to the East (No4/28) – property of William Munson and also the property to the West belongs to him (No24). To the south is the Wivenhoe Board School. It mentions that the passageway is subject to the right of way of Nos 1-5 (subject to their paying a proportion of the expense of keeping the passageway in good repair) and they also (to the West) have the right to use water from the tap. William Munson is asked to hand over a copy of the deeds to Jane Goodridge.

In consideration of a payment of £124 Jane Goodridge sells no 3 (which is still occupied by Elizabeth Willis) to James Munson. It is mentioned that the properties to the east (property of late Sarah Willis) and west belong to James Munson. To the south the Board School. Jane signs with a X. Mentions right of way in consideration of proportion of expense of upkeep again.

Conveyance between Mr James Munson and Mrs Henrietta Chamberlain of Fernside, Belle Vue Rd, Wivenhoe for a sum of £155.

The house, formerly in the occupation of Mrs Elizabeth Willis is now occupied by Mr Corbell. Properties to left and right belong to James Munson. Wivenhoe Council School to south.

Henrietta Chamberlain dies and the house passes to Mrs Etta Phyllis Dan her daughter of Penlee, Belle Vue Rd, Wivenhoe. Etta was the wife of Frederick Dan and the personal representative (as well as daughter) of Henrietta Chamberlain. She had also been the music teacher at the Wivenhoe Primary School and organist at St Mary’s Church.

Etta Dan dies intestate and the house passes to Philip Frederick Dan (father of John Chamberlain Dan (the well-known potter) in whom the sale is vested). He sells the house to Stella Mahon and her grandson Samuel Heard (son of the well-known local painter Mike Heard) for the sum of £7,500.

The house is bought for £19,000 (note inflation!). At the time of purchase it was confirmed that the passageway which passes under the bedroom on the first floor of number 26 Queen’s Rd forms part of that property, with the owners and occupiers of nos 28 and 30 having a right of way through the passageway and over the back garden of no 26 (subject to a payment of the proportional expense of keeping the property in good repair). The occupiers of nos 22 and 24 also have a right of way through the passageway to their own properties but not over the rear garden of no 26.