You are here: Home>Topics>People>The Sanfords>About the Sanford Family and their Legacy

About the Sanford Family and their Legacy

They were a significant family in Wivenhoe from the mid 1700s to the late 1800s. 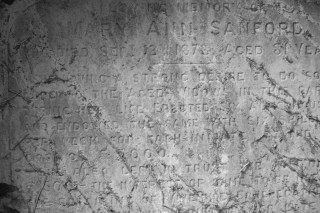 The Sanford Family became wealthy in the 1800s

Their story starts in 1700s

My main area of interest in the Sanfords is with Mary Ann Sanford and her siblings. But I feel it’s necessary for the bigger picture to know a little about her ancestors so I have started with her grandparents. John Sanford and Deborah Hopkins who married in 1741 and had 6 children, Elizabeth, John, William, Edward, Benjamin and Thomas.

Thomas died in 1763 at the age of 16. There is no record for the cause of his death. His siblings lived into their late 70’s or 80’s, apart from John, father of Mary Ann. He was 52 when he died which was the average life span at that time although this could vary depending on region and class.

John married Ann Barker on the 14th June 1774 by licence in St Mary the Virgin church in Wivenhoe. Marriage by licence was not that common. Although it seems that most of the Sanfords who married did so by licence. The Sanford family were members of the Congregational church.

Occasions when a licence might be applied for would be if either party were Roman Catholic or a nonconformist and they didn’t want to attend the Anglican church for the reading of the Banns, though they were required to marry in an Anglican Church during the period 1754-1837.

There was also the fact that with a licence the marriage could take place more quickly, in theory within two days of having the licence. A speedy marriage might be preferred if there was the possibility that a child could be born out of wedlock.

Children of the Sanfords

John and Ann’s first son also named John, was born on 6th March 1775. He was followed by Deborah in 1777, Thomas and William, twins, in 1782. William sadly died in the January of the following year. No reason was recorded for his death but child mortality at this time was very high. Approximately 1 in 5 children died before the age of 5. This statistic could vary from region to region. Next came Benjamin in 1785 and Mary Ann in 1792. This was a long gap between Benjamin and Mary Ann. One could speculate that there were other pregnancies during this time which didn’t run to full term.

The Sanfords as Traders and Property Owners

The fortunes of the Sanford family seems to have been very much influenced by the uncles of Mary Ann who were traders in oysters as well as being involved in other trades. They owned a number of properties both commercial and residential.

These included warehouses, what was described in Benjamin Sanfords will as Malting office buildings, yards and gardens and a coal merchants yard. They also owned farms and land in Rowhedge, Elmstead and Wivenhoe.

To begin with these properties belonged to the uncles of  Mary Ann Sanford. But on the death of their uncles Benjamin and William, Thomas Sanford, brother to Mary Ann, inherited a number of these properties along with substantial amounts of money from the sale of some properties. Mary Ann also inherited £300 in Benjamin’s will as did Kezia.

Although much of their wealth was inherited they likely had investments from which they gained further income. In the case of Thomas, at the time of his uncle Benjamin’s death, Thomas was not only working as an oyster merchant with Benjamin he was also living with him in a house in West Street. Thomas subsequently inherited this property.

Benjamin had never married and so had no children. It can be imagined that he would have developed a close and obviously caring relationship with Thomas who was his main heir.

The Sanford family were influential in many areas of Wivenhoe life as  employers and landlords. They were also oyster merchants, coal merchants, farmers and boat owners. John, brother to Mary Ann, was a shoemaker and apprenticed local boys to the trade. Another family member was a grocer.

The Sanfords Charitable Work in the Community.

They were active in the Congregational church and showed their benevolence not only in the building of a school, church and almshouses, they also set up more than one charity to provide support for the poorer residents of the parish.

William Sanford on his death in 1830, left 50 shillings a year charged on a farm at Fingringhoe to buy bread for 10 poor communicants. His brother Benjamin Sanford in 1840 also left 50 shillings yearly, charged on Oyster layings, for coal for 50 poor widows or other aged persons. (A History of the County of Essex. Vol 10.)

While the Sanfords were very fortunate in their wealth, they were prepared to use some of this wealth to benefit others in their community.

Continuation of the Family Line

Out of the 6 members in the family of Mary Ann and Thomas, only two of them married, Kezia and Deborah, and none of them had children. Consequently that line of the family died out with the death of Kezia, who was the last member of that part of the family to die in 1886. However there were a large number of cousins who did go on to marry and have children and so the Sanford line has continued to show many family trees.

I find it sad to think that there was no ongoing line from Thomas, Mary Ann and their siblings. I frequently find myself wondering why didn’t they marry and of the two who did marry why was their no children. Or was their pregnancies which just didn’t  run to full term.

There is no question that they were a close supportive family who cared a great deal about their community and being conscious of their own good fortune, did much to support those less fortunate than themselves.

Also see:  About the Rebow Almshouses and Mary Ann Sanford