About the Wivenhoe Housing Trust

It manages 13 properties in Wivenhoe for older people 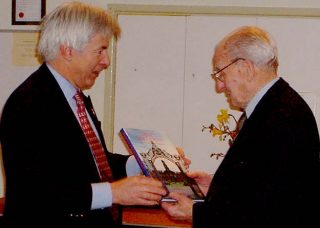 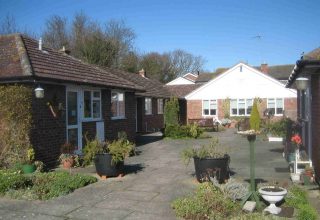 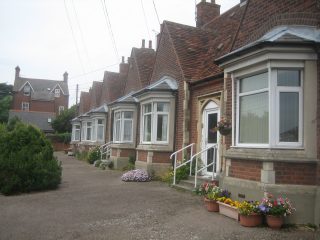 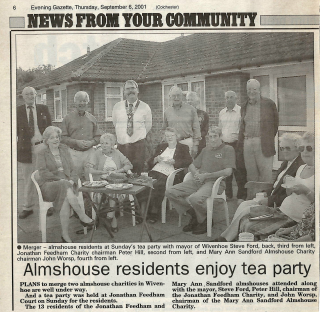 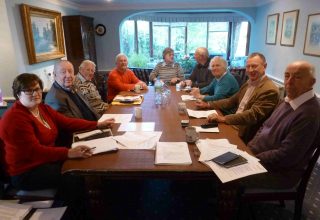 The Jonathan Feedham Charity and the Mary Ann Sanford Charity were run as two very separate charities although both charities used the services of Michael Siggs as their Clerk. His responsibility as Clerk was to handle all of the administration of the charity.  The trustees would meet quarterly to make decisions of a strategic nature and if necessary would hold other meetings and discussions between those quarterly meetings as required.

The Jonathan Feedham Charity was more fortunate than the Mary Ann Sanford Charity in that their almshouses properties were not as old, having been built in 1974, and therefore did not require as much maintenance.  Whereas the Mary Ann Sanford cottages were built in 1873 and required a huge amount of time, effort and money to bring them up to a modern standard including for example an inside toilet and a proper bathroom.

For a long time there were just four trustees.  Local builder, Leslie Kemble had been a trustee for 40 years by the time of the merger. Charles Scofield wasn’t sure when he was appointed it was so far back, and then Chairman, John Worsp, had taken over when his father, Lewis Worsp, had retired. Don Hirst, the fourth trustee was a comparative new boy, becoming a trustee in 1984 and had the advantage, at least to the other trustees, of living in Park Road within a few yards from the almshouses cottages.

They all did a good job in modernising the cottages and bringing the finances of the charity up to a sufficient level that when the merger was quietly mooted by Michael Siggs they didn’ t feel the poor relation.  It also suited Les Kemble, as after 40 years of service, he felt he should retire and John Worsp also took the opportunity to retire.

When I was nominated by Wivenhoe Town Council in January 1991 to become a trustee of the Jonathan Feedham Charity, the Rev Stephen Hardie was Chairman, or perhaps I should say the late Stephen Hardie as he has long since died. Co-trustees were Cllr Val Last, Tony Forsgate and Jeff Whaley, all of whom had been trustees for quite some time. Indeed Tony had been the Treasurer for the Charity in its early days taking over this role from founder trustee Alec Paterson until Michael Siggs became the Clerk. Cllr Bob Richardson later joined as a trustee, replacing Val Last, and Rev David Thomas replaced Rev Stephen Hardie who had left Wivenhoe for a new position in Harwich.  I found myself becoming Chairman in April 1992.

The merger in 2001 to create the Wivenhoe Housing Trust

Encouraged by Michael Siggs, and my knowing John Worsp, talks began about a merger. In November 2000, I wrote a paper for all of the trustees of both charities that set out all of the facts about the two charities and, during 2001, the decision was made to merge. A formal application was made on 17th May 2001 to the Charity Commission for permission to merge. Approval for the merger was given on 21st September, subject to some formalities as advertising the proposed merger in the local newspaper. It all came into effect on 20th December 2001.

A Party to Celebrate the new Charity in February 2002

On Tuesday 26th February 2002, Trustees of the two former almshouse charities, celebrated their successful merger with residents, former Trustees and Wivenhoe Town Mayor Cllr Steve Ford at a party held in the Bowls Club. The new charity, the Wivenhoe Housing Trust, started on 1st January with property and assets valued at over £1million.  During the evening, Chairman of the new Charity Cllr Peter Hill presented a book ‘Houses of Noble Poverty’ to retiring Trustee Mr Leslie Kemble who had served with the Mary Ann Sanford Almshouse Charity for 40 years. Mr Kemble was a former builder and well-known undertaker in Wivenhoe. He had also served for 14 years on the Wivenhoe Urban District Council and was its Chairman in 1967-68.

Big changes in Trustees in November 2013

This meeting held on 23rd November 2013 was the last meeting to be attended by Tony Forsgate, Mrs Anne Horner and Karl Douzier who were all retiring as Trustees to the Charity.  It was noted that Mr Forsgate had served the current Charity and prior to the merger for 40 years.  He was thanked for his dedicated and outstanding service to the Charity throughout this time.  Karl Douzier and Mrs Anne Horner were thanked for their diligent service to the Wivenhoe Housing Trust over the past 11 years.  Both had made great contributions towards the running of the Charity that was much appreciated.

The Wivenhoe Housing Trust and its Relief in Need Fund


The Trust continues and with its nine trustees. Some names may have changed over the years since 2002, but the objects of the Trust remain constant and that is to manage the 13 properties for the benefit of local people. Hopefully one day we might be able to acquire some more homes for people in need of a home. One thing we have been able to bring forward from the Jonathan Feedham Charity was the Relief in Need Fund. This was established by this charity in the early 1990s. Since that time, the Trustees have been able to give grants quietly and discreetly to many people to help them with a particular financial difficulty.  Our only proviso is that they must be a Wivenhoe resident.  In 2020, we started calling this fund the Wivenhoe Hardship Fund, as this sounded more in keeping with modern language rather than the language of charity law!

To apply for an almshouse, or for a grant from the Hardship Fund, contact any of the Trustees, or write to Michael Siggs, Clerk to the Wivenhoe Housing Trust, PO Box 993, Colchester CO3 3TQ or email:  michael.siggs@btconnect.com.

For other pages about Wivenhoe’s almshouses click on the links below: