You are here: Home>Topics>People>The Sanfords>Anna Maria Turner - An early resident of the Mary Ann Sanford Almshouses

About Anna Maria Turner (nee Ellis) who died in 1892

Anna Maria Turner was born in Rowhedge, East Donyland. In May 1802, at the time she was born, she had two older sisters and four brothers. Three years later she had another brother.

When Anna was born, her father John was aged 37 and her mother was aged 33. They had eight children in total, with Anna Maria being the second youngest

We can only guess at the family’s circumstances at that time. In 1810, the main occupation was said to be fishing. There were other occupations locally, such as ship- building, sail-making and agricultural labouring.

Whatever his occupation, money would have been tight. To feed and house a family of ten would have been a hard life for both parents and no easy life for the eight children. I can imagine that hardship would have been no stranger to this and many other families in similar circumstances.

Anna’s father and mother lived to the age of 67 and 69 respectively which in fact was above average life expectancy at that time. They appear to have lived all their lives in Rowhedge.

Anna marries in 1821 and has six children

In 1821, Anna married William Turner, a fisherman. Until 1837/39 they were living in Rowhedge where their first five children were born and baptised in St Lawrence, the local church, but in 1841 they were living in West Street in Wivenhoe. They had 6 children, Charles (13), Robert (9), John (7), twins Elijah and Elisah (4), James (1).  By 1851 they had another daughter, Esther, who was born in 1843. By this time it appears that their two eldest children were no longer living at home.

In 1851, Anna and William along with 5 of their children were still living in West St. The period between 1851-1861 seems to have been a very eventful time in their life.

Their sons Elijah and Robert married. Robert married a local girl, Pery Bates. In 1858 Robert and Pery had a son who was also called Robert. Sadly Robert senior died that same year.

The 1861 census shows young Robert, aged 3, as living with his maternal grandparents and his aunt Caroline who at that time was aged 15. Robert did return to live with his mother when she remarried Samuel Clark in 1860.

The only evidence of Elijah’s marriage is shown in the 1861 census which shows he was either living with or visiting the home of his parents and that he was married but there is no indication of who he was married to. What is known is that his wife died sometime between 1861 and 1866. In 1866 Elijah married Caroline Bates, his sister in law. In the parish record he is described as a widower. Elijah and Caroline had six children and continued to live in Wivenhoe. Elijah died at the age of 56, when he fell 14 feet into the hold of a ship on which he was working. Caroline was left with 4 of their 6 children still dependant on her.

By 1861 Anna is still living in West St. In that year’s census, she is shown to be at the home of Mary Ann Crosby, a local resident. Anna’s occupation was shown to be a Monthly Nurse.

In the 18th and 19th century a monthly nurse would look after a woman and her new born baby for the first few weeks after the birth. She could be attending several women on a part-time basis.

Although ‘Registration’ was not available for women to act as midwives or monthly nurses, a system of ‘Certification’ was in being in the late 19th century and continued into the early 20th century. To qualify, a candidate monthly nurse would attend a course in a lying-in hospital for four or five weeks. The prospective monthly nurse as a rule paid their own charges in respect of Hospital expenses and afterwards entered into practice on their own responsibility.

In 1864 their youngest daughter Esther married Thomas Kerr in Colchester.  By 1871 she was living in London with Thomas her husband. 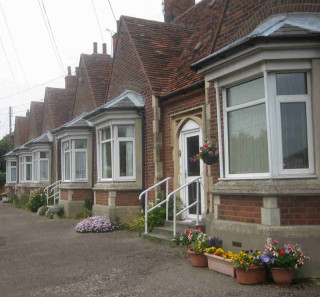 The census shows that Anna Maria was a visitor in the home of Esther who by that time was mother to 3 children and was possibly also pregnant  with her fourth child.

While Anna Maria was visiting her daughter in London, her husband William was at home in Wivenhoe. He died in 1874. How soon after this Anna Maria moved to the almshouse is not clear, but in 1881 she was living at 2 Rebow Road, in the almshouses which were built by Mary Ann Sanford.

She continued to live there until she died in 1892.