In Stanley Road and Rectory Road 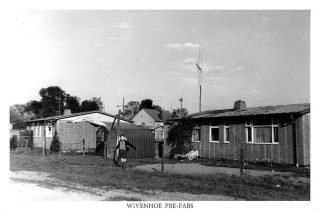 Pre-fabs in Wivenhoe, now on the site of Stuart Pawsey Court.
Photo via Clive Peck 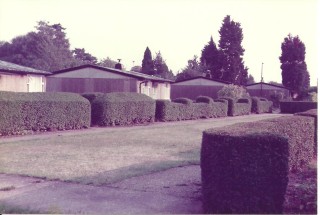 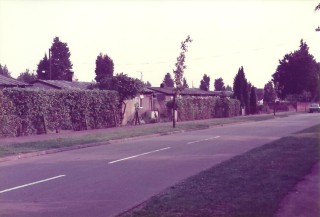 Prefabs in Rectory Close. This view from Stanley Road
Photo by Toni Stinson 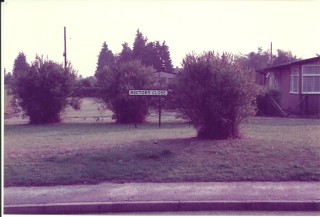 After the second World War, there was a desperate need for more housing. Prefabs were a way of building modest homes quite cheaply.  8 Prefabs were erected in Rectory Close, which were demolished by Colchester Borough Council in 1988 to make way for Stuart Pawsey Court, a sheltered housing scheme comprising some 20 apartments and several bungalows.  There were also another 2 Prefabs in Rectory Road, next to the entrance to the Cricket Club. These were also demolished by Colchester Borough Council at roughly the same time, and in their place William Sparrow Court was constructed comprising 9 flats and apartments.

These prefabricated houses, or simply Prefabs as they have always been popularly called, were built in 1946 / 47 by the Ministry of Housing and Local Government.  Many families had happy memories living in those prefabs. They were all kept nicely and the gardens were mainly used for growing a few vegetables.

I can remember calling in to see Mrs Rosie Marshall who lived in one of them. She enjoyed playing the piano at the Wivenhoe Over 60s Club, was a member of the Wyvenaires and a member of the Wivenhoe Carnival Committee in the early 1980s when I was Chairman.  Sam Oliver also lived there. Some people also knew him as Stan, like myself. He had been the caretaker at the Phillip Road school and was father to Colin Oliver who later worked for Wivenhoe Town Council. Stan used to entertain everyone by playing the spoons, that is, two large table spoons which always seemed to be just ready in his pocket!

In around 1986 the community of people who lived there were given notice by the Borough Council and re-housed.  Toni Stinson remembers that Violet and Bob Page were one couple and they went to Britannia Crescent.  Both are deceased now.