Referring to a row of five cottages at The Cross sold for £400 in December 1914. Formerly owned by a Trooper in the Cape Mounted Police and named 1-5 Nyanza Cottages after the Kenyan province on the east side of Lake Victoria. 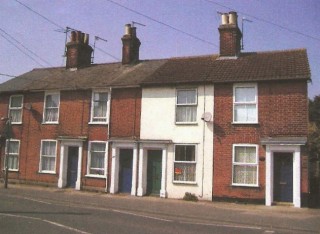 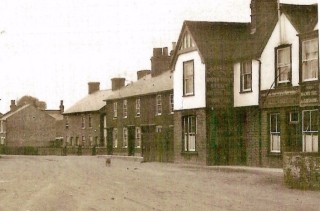 1957 ABSTRACT OF THE TITLE of No. 2 Nyanza Cottages (now No.43), The Cross, Wivenhoe, Essex Sparling, Benham and Brough, Solicitors, Frinton-on-Sea [including additional references to 1 -10 Colne Terrace, Hillside on Queens Road and Elaine Cottage on Park Road]

10 December 1914
BY CONVEYANCE of this date made between Hector Thomas Pittuck of Cape Colony in South Africa a Trooper with the Cape Mounted Police (Vendor) of the one part and George Garden Colville Duncan of Wivenhoe in the County of Essex Engineer and JessIe Florence his wife (purchasers) of the other part
RECITING details of Vendor and agreement for sale at price of £400.
IT WAS WITNESSED that in consideration of sum of £400. Paid etc. (receipt etc.) the Vendor as B.O. [beneficial owner?] thereby conveyed unto the Purchasers
ALL THOSE five brick built messuages tenements or rentaries with the yards gardens and appurtenances thereto belonging formerly in the occupation of Crane Thomas Wyatt James Wright William Chiswick and Frederick Wymark afterwards of the said Frederick Wymark [blank] Cox A Church and The Misses Bridges and then of Wymark Bridges Popps Church and Woods situate at Wivenhoe Cross in Wivenhoe aforesaid near the Public House there called the Horse and Groom and having a frontage to the high Road of 61 ft 4ins or thereabouts and a depth of 108 ft as the same messuages were conveyed to the Vendor by an Indenture dated the 5th day of Dec. 1906 and made between Elizabeth Gowing Pittock therein described of the one part and the Vendor or the other part
TO HOLD the same (subject to a right of way and passage for the owners and occupiers adjoining premises over and along the piece of ground of the width of 6ft 6ins situate at the North end of the premises thereby conveyed) Unto and To the use of the Purchasers in fee simple
CERTIFICATE as to value £500 EXECUTED on behalf of the Vendor by his Attorney and attested
[noted in handwriting that the Originals in possession of Sparling Benham and Brough, Southend on Sea, and Colchester 9.12.1957.]

22nd December 1911
BY POWER OF ATTORNEY ad H. T. Pittuck requested Stacey Wood of Wivenhoe aforesaid Provision Merchant (Attorney) to act for him in his affairs during his absence which the attorney consented to do
IT WAS WITNESSED that said H. T.Pittuck thereby appointed the Attorney his true and lawful attorney (such appointment to be irrevocable for a year ensuing the date thereof) to act in conduct and manage all his affairs within the U.K. during his absence therefrom and for the purpose aforesaid he thereby conferred upon the attorney the following powers and authorities (inter alia)
To raise money on his real estate either by absolute sale or by way of mortgage or otherwise in such manner as his said attorney should think fit and for that purpose to surrender and to do and execute all such acts deeds and things as may have been necessary for vesting the same in the purchaser or for securing to the lender the payment of any moneys so raised and the interest thereon. Generally to act in relating to his estate and to the premises as fully and effectually in all respects as he himself could have done. Undertaking to ratify everything which his attorney should do or purport to do in virtue of abstracting presents
EXECUTED BY said H. T. Pittuck in presence of two witnesses before a Notary Public

11th March 1920
BY HIS WILL of this date George Garden Colville Duncan of Hillside Queens Road Wivenhoe Essex appointed his wife Jessie Florence and his brother-in-law Stacey Wood Executrix and Executor thereof and after directing payment of just debts etc. gave devised and bequeathed all his estate both real and personal unto his said wife Jessie Florence for her own use and benefit absolutely
DULY signed and witnessed
13th October 1934 The said G. G. C. Duncan died on this date
29th November 1934
PROBATE of the Will of the said G. G. C. Duncan was granted to the Executors therein named out of the District Probate Registry at Ipswich

4th September 1939
BY HER WILL of this date said J. F. Duncan of Hillside Queens Road Wivenhoe Essex Widow appointed Barclays Bank Ltd. (thereinafter called the Bank) her elder daughter Ruby Vera Oakley and her brother-in-law Stacey Wood of Wivenhoe aforesaid Executors and Trustees thereof (and by clause 3 thereof gave and devised her messuage and premises known as ‘Elaine’ Park Road Wivenhoe aforesaid as tenants in common in fee simple in equal shares to her nieces and nephew Jean Duncan Nancy Duncan and Alan Duncan the three children of her late husband’s deceased brother William Cameron Duncan or the survivor of survivors of them
DULY signed and witnessed. 29th May 1934 The said J. F. Duncan died

5th December 1945
THE WILL of the said J. F. Duncan proved in the Ipswich District Probate Registry by Barclays Bank Ltd of 54 Lombard St London E.C.3 Ruby Vera Oakley of 37 Chelmerton Avenue Chelmsford Essex the wife of Harry MacDonald Oakley and Stacey Wood of Le Marney The Avenue Wivenhoe Retired Grocer
MEMORANDA (endorsed on above Probate) (Inter alia) By Assent dated the 15th day of July 1946 made between the within-named Barclays Bank Ltd Ruby Vera Oakley and Stacey Wood (thereinafter called the Executors) of the one part and the said Ruby Vera Oakley (thereinafter called the Beneficiary) of the other part the Executors as P. Rs. of the within-named Testatrix assented to the vesting in the Beneficiary of All Those properties known as Nos 1-10 Colne Terrace Wivenhoe 5 cottages at Wivenhoe Cross Wivenhoe and 68 and 69 Priory Street Colchester for an estate in fee simple absolutely and acknowledged the right of the Beneficiary to production and delivery of copies of the within-written Probate

15th July 1946
BY ASSENT of this date made between Barclays Bank Ltd whose registered office was at 54 Lombard Street London E.C.3 the said R. V. Oakley of 37 Chelmerton Avenue Chelmsford in the County of Essex the wife of Harry MacDonald Oakley and Stacey Wood of Le Marney The Avenue Wivenhoe in the said County of Essex Retired Grocer (Executors) of the one part and the said R. V. Oakley (Beneficiary) of the other part
IT WAS WITNESSED as follows:-
1. The Executors as P.Rs of the said J. F. Duncan as such P.Rs. assented to the vesting in the Beneficiary of ALL the property described in the First Schedule thereto for an estate in fee simple absolutely
2. ACKNOWLEDGEMENT by Executors to right of the Beneficiary to production of the document specified in the end schedule thereto and to delivery of copies thereof
THE FIRST SCHEDULE
(inter alia) All the before abstracted premises
THE SECOND SCHEDULE
5th November 1945 PROBATE of this date of the will of the said J. F. Duncan
SEALED by Bank in presence of Director and Secretary and executed by said R. V Oakley and S. Wood and attested

MEMORANDUM By a conveyance dated the 9th of December 1957 the within named Ruby Vera Oakley conveyed to Albert Edward Howard in fee simple the property known as Number 2 Nyanza Cottages The Cross Wivenhoe being one of the five cottages thirdly described in the within written Schedule Together with and subject to the rights as mentioned in the said Conveyance and the usual acknowledgement and undertaking in respect of this Deed were given.

[Nyanza Cottages were included on the Wivenhoe Local List adopted by Colchester Borough Council in March 2012.]