You are here: Home>Topics>Activities of the WHG>4 Major Projects of the WHG>Wivenhoe's Pubs & Beerhouses>People who have lived at The Anchor Inn

People who have lived at The Anchor Inn

About the landlords and their families 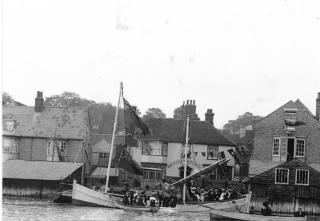 These notes were compiled from local records during the research into The Anchor Inn.

Charles was born about 1820 and landlord from 1846 to 1862. In 1846, the 26 year old, was the first Anchor landlord described as an oyster merchant. In 1861 when fisherman reached amicable agreement with an army march at Wivenhoes quayside, they were treated at the pub by Charles to ‘Colchester natives’ oysters and left at 5am. Charles ran the pub for sixteen years and died in Wivenhoe in 1881, leaving his estate of ‘under £600’ to his wife Amelia. He was succeeded from 1865 – 67 by his eldest son, William and from 1868-71 by his son in law, Henry TB Wood who in 1865 had married his ‘eldest daughter Emma Elizabeth. Charles died 9 December 1903 leaving his widow £88.

Dick the son of Richard William Ham was born about 1852, and landlord from 1883 to 1890. On 11th October 1893 he married Ellen Mary Naylor St Mary Church, West Bergholt, Essex. The 1901 census calls him an auctioneer and Dick Barton ‘the burly auctioneer and undertaker’. Peter Kay called him the ‘leading Wivenhoe builder from the 1880s to the 1920s’. A number of Dick’s family ran Wivenhoe pubs including Nathan Ham at the Falcon, Abraham Ham at The Greyhound, Robert Ham at The Sailors Return and William Ham at The Yachtsman. Dick told the Essex Standard that he was standing in the pub yard on the morning of the 1884 Essex earthquake at about 9.20a.m and heard a tremendous noise, like the rushing in of an underground train. When he’d recovered he ‘was surrounded with the falling debris’. Kay says that The Anchor roof was ‘virtually unscathed, a testimony to well-fixed tiles of this type…capable of withstanding an earthquake.’ In 1898 Dick was elected to the first Wivenhoe Urban District Council. Documents show that after leaving the pub, he was a Carpenter, Builder and Auctioneer/valuer, living until his death on 8 October 1932 at the Firs, Wivenhoe. In his will he left £1,290.75 to his widow Mary and her father, William Naylor, a legal clerk.

Isaac was the last recorded landlord. Directories refer to the pub as Anchor Hotel, The Quay, Wivenhoe, Essex  He was born. about 1854 in Amport Hampshire to Isaac Hook and Mary Bishop. In 1877 he married, in  Bridgwater Somerset, Emily Sealey, two years his senior When he took over The Anchor in 1910 he was 56 year old. The April 1911 census lists him as living at Hamilton Villas, New Town Field, Wivenhoe, Essex. No further reference to The Anchor have been found. Isaac died March 1927 in Winchester Hampshire and left £173.35 in his will.