You are here: Home>Topics>Shops, Trade & Industry>Larger businesses>Working for North Sea Canners. An interview with Annie Skilton 2004

Working for North Sea Canners. An interview with Annie Skilton 2004

Annie Skilton (nee Bloom) was born in Wivenhoe in 1918. The Blooms rented a terraced house at 13 Station Road. Annie had 5 brothers (Bob, Albert, William, Arthur and George) and 6 sisters (Gertie, Maharla, Lily, Dolly, Alice and Edie). Her father worked for Mr Goodwin as a coffin maker. 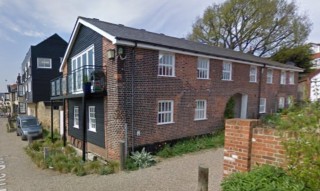 Annie joined North Sea Canners on Wivenhoe East Quay when it first opened in 1932 aged 14.  The building still exists today  but it is now residential and is known as “Rosabelle”.

As the business grew the factory relocated some time before the outbreak of WW2 to a larger building on West Quay also now residential but the sign “North Sea Canners” can be seen today on the top of the building. This building was for a number of years a warehouse for Tiptree Jams. 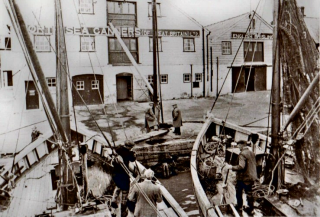 Canning Factory on the Quay

The directors of North Sea Canners were Mr Lewis Worsp, Colonel Hardy and Mr Stanley Young (Young’s Seafoods were innovators of potted shrimps being sold on a commercial basis).

The factory canned different products according to the seasons: shrimps, sprats, chickens and autumn fruits. The location near the railway line meant that freshly potted shrimps could be sent to hotels in Colchester and London.

During WW2 it became to increasingly difficult to obtain the butter for the shrimps and olive oil to can the chickens so the business closed.