You are here: Home>Topics>Shops, Trade & Industry>Shops and small businesses>Asa Beckwith's Dairy at 21 The High Street 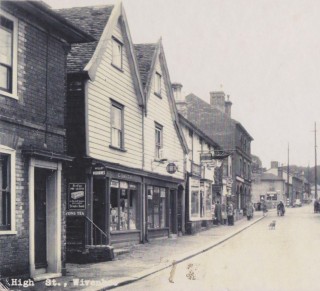 In 1918 Asa Beckwith was 73 years old and had occupied these premises in Wivenhoe’s High Street since 1881, possibly even earlier. In 1917 he was listed in the Kelly’s directory as a Dairyman with his 2 adult sons as his assistants.

By the 1930s, the shop had become Mr Smith’s sweetshop.

Asa came from Halstead, the son of a farmer with a sizeable farm employing 5 men. Asa’s father died in 1867.  In 1871, Asa had his own farm employing 3 men. He married in 1873 to Julia Emma Lewsey and possibly soon afterwards moved to Wivenhoe.

In 1881 the census shows him as occupying the shop in Wivenhoe High Street; his occupation is shown as a pork butcher.

Right next to the shop is Blyth Lane with its slaughter house at the back.

In 1901, Asa’s occupation is shown as pork butcher/milk seller and in 1911 he is shown on the census as a Dairyman. His sons Arthur and Thomas are working with him as assistant dairymen.

By 1903 two of Asa’s sons, Cyril and Reginald, were working for Ernest Cracknell as bakers. But Cyril went on into the same trade as his father opening a small dairy and shop in Belle Vue Road and delivering the milk on a hand cart.

Milk from a local farm was brought to the dairy in a churn and bottled. It could then be sold in the shop.

Two of Asa’s other sons served during the War and fortunately both survived.