At 5 The High Street 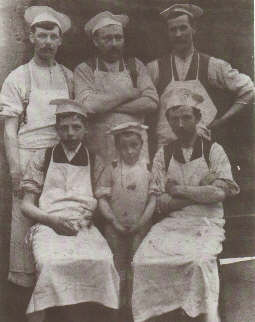 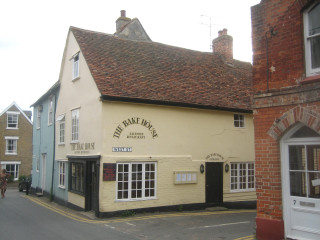 The Bakehouse restaurant which was once a bakehouse.
Photo: Peter Hill (picture taken 2016)

Ernest Cracknell (middle, top row), ran this bakery for over 40 years, and then it continued as a bakery until 1957. The building later became called The Old Bake House and turned into a restaurant. In 2018 it is being turned into residential accommodation.

The flour came from Marriages Mill in Colchester, and bags of flour were stored upstairs till needed when the the flour was sent down a chute to the bakery below.  Once kneaded and shaped, the dough was put into a large wood-fired oven at the back of the premises.

In the early days boys delivered the bread to the local community on their trade bikes, but in later years women were employed to drive the Cracknell bread van.  They baked bread for Rowhedge too and this was taken across the river by ferry.

One of their products were ‘ship’s biscuits’, a rock hard biscuit about the size of a small tea plate, which would keep for months on board the many local yachts.

His son William – Bill (middle bottom row) was a keen yachtsman, and he took over the business when Ernest retired.

Charlie Taylor took over Cracknell’s Bakery in 1952, having worked there from the age of 14 years since 1937.  It is reported that he produced amazing cakes, such as doughnuts, meringues and japs.

When Tesco’s & other large supermarkets opened, Cracknell’s found it hard to compete for business.