About John Stewart who died February 2018 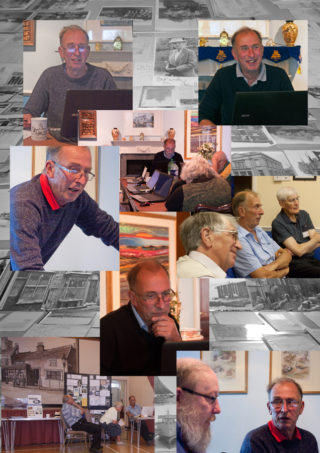 Pictures of John Stewart, one of the founders of the Wivenhoe History Group and who was passionate about Wivenhoe's history, who died in February 2018
Photo montage by Frances Belsham 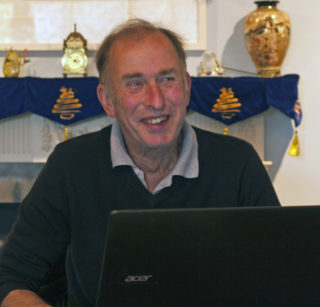 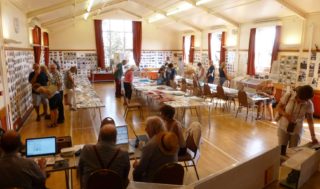 One of John's many Wivenhoe Memories exhibitions held in the Wm Loveless Hall. This was to be his last one held in August 2017.
Photo by Peter Hill 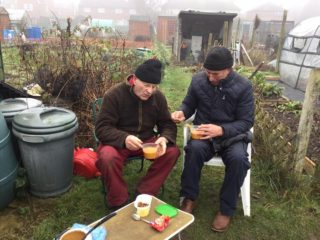 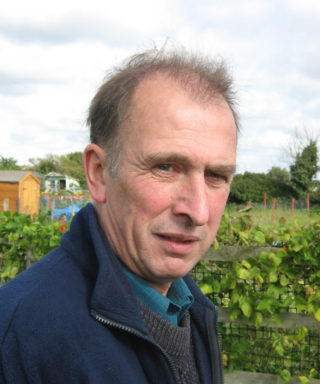 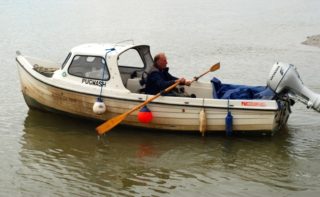 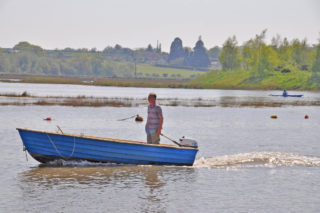 John Stewart in his boat on the River Colne - May 2016 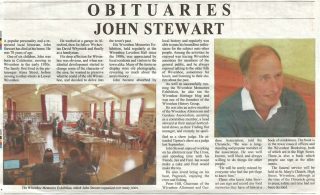 John Stewart was widely known and greatly respected in Wivenhoe particularly for his passion for Wivenhoe’s history. He died on 5th February 2018 aged just 70.

This piece is written in tribute to him as one of the founders of the Wivenhoe History Group, as a stalwart of the Wivenhoe Allotment & Gardens Association for many years and as someone who had a keen interest in the river.

John was born on the 24th February 1947. He spent his early years in Colchester, moving to Wivenhoe when his father got a job as Head Gardener at The Nook. He was then about 5 years old.

The family initially lived in Alma Street until the house became too small; John was the 2nd eldest of three brothers and three sisters.  They then bought a house in Anglesea Road where they lived for several years, eventually moving to Belle Vue Road.

John remembers little about life at Phillip Road School except that on one occasion he won a book for coming top of his class in Rural Studies. This probably reflects his lively interest in everything around him, especially the land and the river.

His father kept rabbits, ducks and chickens for the table. One of John’s duties was to feed them. He would often go with his father to The Nook to help in the greenhouse and in the 5 ½ acre garden. That is probably why John felt so at home on his allotment.

Growing up in Alma Street, he and the other lads there, would play together in that street.  Wivenhoe was very different then. They were no cars in Alma Street and, in the 1950s, not many around in those other streets either.

He got to know Wivenhoe really well and everybody living here at that time, and I dare say, quite a few knew John too.  It would be wrong to describe John as a mischievous boy but I think he had to talk himself out of a few scrapes every now and again.

An interest in the river

He was interested in the old fishermen and knew them all. Later, as a teenager, he would often go out on the river with them, in their fishing boats, as the third hand to make the tea and be useful but stay out of the way when they landed their catch which they would share with him when back ashore.  He learnt lots about the river from these fishermen, including to speak like them, with an old Wivenho’ accent.  John loved the river.

He and one of his brothers would often go out in a boat, and, as he grew up, they would go wildfowling together or hunting rabbits which their Mother would turn into wonderful pies for the family to eat. Perhaps it was his Mother’s good cooking which was the reason why John would talk so enthusiastically about a good meal that he had enjoyed recently, especially if it had been grown, or caught, locally.

From the Phillip Road School, he went on to the Secondary Modern at Brightlingsea with a number of others from Wivenhoe.  He left school at 16 and joined a local firm to begin earning some money. Although he had several jobs in his life, I don’t think he was ever unemployed.

A young man in Wivenhoe

He left the family home, by now in Belle Vue Road, to move back into Alma Street where he rented one of those cottages. He described those days as the best of his life.  I believe a number of parties were held there with his home-made wine! John enjoyed life.

He had many and varied jobs during his working life. He picked things up quickly and always proved himself an asset to an employer. He studied at College to get his City & Guilds in welding. Most of his jobs seem to involve engineering of one sort or another.

He managed to buy a small house at The Cross early on which he always reckoned was one of the best things he ever did.

John began his Wivenhoe Memories exhibition a long time ago; he was never sure when. He had built it up over many years. He accumulated hundreds of photographs and other memorabilia. People have knocked on his door with shoeboxes of photographs which they have found when clearing out their parents’ home and say, “would you like these?”

He held an exhibition of these photographs and memorabilia in the William Loveless Hall every year, usually at the August bank holiday weekend, over all three days. There would be people in the Hall all of this time. There would even be people from overseas who had timed their visit to Wivenhoe to see his Exhibition and be able to talk and reminisce with John.

Although organising these exhibitions was hard work, he enjoyed being able to meet so many people and to talk about his favourite subject.

About John Stewart, the person

John was widely known in Wivenhoe and around the world by people with connections to Wivenhoe. He would talk to anybody and everybody. He would spend hours researching names, families, addresses and connections for people if he was asked. He would like nothing more but to help people.

The history of Wivenhoe fascinated him. He would get excited with each new discovery of some fact or other, and wanted to share this new piece of information with anyone willing to listen.

We will miss his intimate knowledge of Wivenhoe that he knew so well. We will also miss his sense of humour, his cheerful nature and his ready laugh.

He will also be greatly missed at the Allotments where I am currently Chairman. He had a large plot with a shed and greenhouse. He had been on the Committee for a considerable time as well as being Trading Hut Manager for a while. He was a true stalwart; always over there, usually sharing a brew or sometimes some food, or cakes, with a few other close allotment holder friends. He was the sort of person who would get a mower out and cut the grass on the communal track. He had been involved with the Wivenhoe Show and had recently qualified as a Show judge.

John was held in high regard

He was held in high regard by everyone over there. When he died, a collection was immediately started and raised enough money to pay for a bench in his memory to be placed in a prominent position on the track leading to the bottom of the allotments.

He had suffered a severe stroke in 2015 which had put him in hospital. He was determined though to get to fit again. And he did. He was a familiar sight cycling up and down the road to the river. He would often go out on his small boat, called Pugwash, which he bought when he retired, or in his dinghy, by himself, to catch some fish for his supper.

John tragically and suddenly died at his home at The Cross on 5th February 2018 aged just 70.

He will be sorely missed by a great many people who knew him. He had earned our respect for his knowledge of Wivenhoe’s history, the passion he had for it and for all of his other interests. He will be long remembered for all of these reasons. His Wivenhoe Memories Collection will stand in tribute to him and his collecting for evermore.