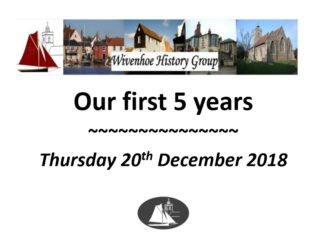 The History Group was founded at a meeting held at the Nottage Maritime Institute on Wivenhoe Quay which was held on Thursday 25th April 2013. It was attended by 21 people who confirmed their desire to create this Group for the purposes of the following aims:

a) To promote, support and actively encourage research into the history of the parish of Wivenhoe in the county of Essex

b) To encourage people of all ages to take an interest in their local history by establishing a web-based community archive and various other means such as exhibitions, lectures, articles and publications.

In our first 5 years, we have done just that.

Perhaps our most significant achievement is the creation of our website, a community archive of knowledge and photographs about people, buildings, businesses, organisations, boats and events from Wivenhoe’s rich history. One of this archive’s most prolific contributors has been Pat Marsden who has conducted a huge amount of detailed research into many subjects including transcribing many deeds and maps, including the 1799 map of Wivenhoe.

Click on the link below to see a brief overview of what the History Group has achieved during these first years of its existence. It was used as the basis of a talk which I gave at a small  party of about 25 members held in the British Legion Hall on 20th December 2018.