You are here: Home>Topics>Activities of the WHG>4 Major Projects of the WHG>Wivenhoe's Pubs & Beerhouses>About The Anglesea Arms (1860s - 1922)

In Queens Road, at the High Street end, on the north side 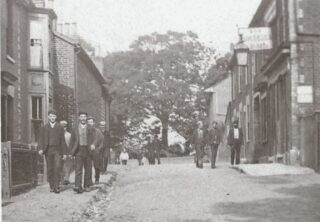 Queens Road looking west with The Anglesea Arms at the right. Note the street lamp. 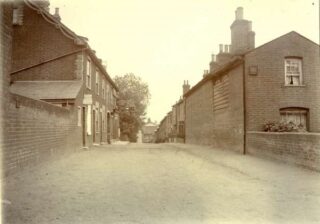 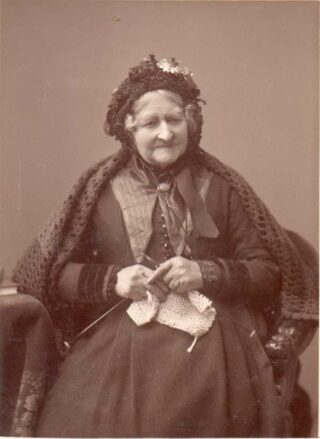 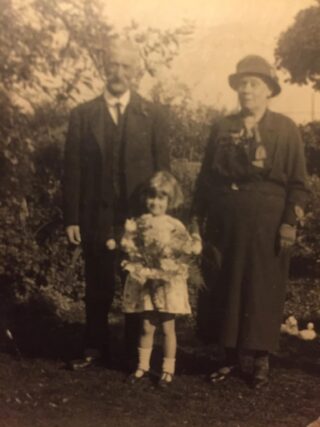 15 Oct 1933 Walter Reed and Elizabeth Joliffe who was landlady of The Anglesea Arms until 1914.
Picture owned by John Bowes 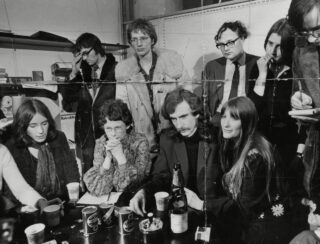 The Anglesea Arms was one of the many Victorian beerhouses and hotels to open in the 1860s as Wivenhoe saw a major expansion with the arrival of the railway.  One of only four beerhouses to survive an Edwardian cull that saw six others and two pubs close, it survived until 1922 when its closure, along with The Yachtsmans left just two beerhouses remaining in Wivenhoe

The Anglesea Arms was one of the many beerhouses to open in Wivenhoe in the 1860s as the village saw a major expansion that coincided with the arrival of the railway.  Queens Road was one of many to have been built at this time along with Park Road, Alma Street and Station Road. Many of the Victorian terraces are also contemporary to this period.  The Anglesea Arms was clearly purpose built as a pub but unusually for those built in Victorian times it did not occupy a corner plot, of the Wivenhoe pubs and beerhouses of the era it is unique in this respect.  The archway to the left would have provided access to the yard at the rear.

The Anglesea Arms was originally named The Old Shipwrights, a name almost certainly chosen by the first known landlord, William John Hindwood whose main occupation was a shipwright1. William John was born John William in 1809 and married Elizabeth Ann Cook Powell in 18332. They had eight children.  William died in 1872 and his widow then took over as landlady in her own right.  A photo of Elizabeth shows her as a widow with woollen shawl and knitting in hand. It is one of the earliest known photographs of a Wivenhoe publican.  Elizabeth is last recorded as landlady in 1874. She would later move to Deptford where she died in 1893 at the age of 823.

The next landlord was William Easter Culley who was born in Thorpe, Suffolk in 1852 and married Elizabeth Selina Ham in 18754.  Like his predecessor, William was a shipwright, however he appears to have taken the decision to change the name of the beerhouse to The Anglesea Arms. Nearby Anglesea Road was named in honour of Lord Alfred Paget, the Marquis of Anglesey, commander of the British cavalry at Waterloo. The Marquis had yachts built by local boat builder Philip Sainty and famously had him released from Chelmsford Jail in order to do so5.

The 1881 census is the only time that William is recorded as the landlord of The Anglesea Arms. He is not named in any of the trade directories of the period, although he was listed as still living on Queens Road in 1891 and would resurface as landlord of The Horse and Groom twenty years later.

Although beerhouse keepers were usually, but not always, listed in Victorian trade directories the name of the beerhouse was rarely given, in contrast to the public houses. It is therefore often difficult and sometimes impossible to identify the particular beerhouse in question, especially if the tenure was brief.  Although we can piece together much of the history of The Anglesea Arms there are gaps in the record, one of which occurs after William Easter departed, as we do not know who was landlord until 1886.

Thomas Bartlett Howard was born in Wivenhoe in 18526 son of Thomas and Jane Howard, Bartlett being his mother’s maiden name.  Thomas married Elizabeth Ann Hazell in 18757 and they had three sons, Thomas and John.  Thomas is recorded as the landlord in the Kelly’s Directories of 1886 and 1890 and appears on the 1891 census still living on Queens Road, by this time he appears to have given up on The Anglesea Arms.

The next landlady was Mary Hadley, the widow of the same Joseph Hadley who was the master of the “Jane“which sank in 1877 with the loss of all on board8.  Mary had previously lived on Clifton Terrace and was only recorded as running The Anglesea Arms on the 1891 census which also shows that she was running it as a lodging house9.  Mary ended her days in the Stanway Union Infirmary in 1918, leaving an estate valued at £187 16s10.

Little is known about The Anglesea Arms during the 1890s. The next known landlord is Francis Shackleton who is listed on the 1901 census. The previous known landlord Mary Hadley, now living two doors down, was still taking in lodgers.  Francis was a Royal Navy Pensioner, born in Rochester, Kent in 1842. He’d married Jane Elizabeth Partridge in 1879. The couple had two daughters, one of whom was employed as a barmaid at the time of the 1901 census.  Francis is recorded as a beerhouse keeper in the 1902 Kelly’s Directory but appears to have left some time afterwards.

Alfred Edward Bowes was born in 1867 at Melcombe Regis in Dorset, but moved to Hereford as a youngster.  He married Elizabeth Heath in 1894 at Colchester but the couple were residing at Woking Surrey in 1901.  Alfred is shown as a beerhouse keeper in the 1906 Kelly’s Directory, but he was admitted to the Royal Hospital Chelsea the same year and died on 5 Sep 1906.

Elizabeth would continue to run The Anglesea Arms as a widow but then remarried in 1910 to Walter Reed Jolliffe, who was a general carter. Elizabeth continues to be listed as landlady until 1914.

The final landlord of The Anglesea Arms was Henry Edwin Bishop who was born in Whitstable, Kent in 1872.  Henry is known to have kept The Anglesea Arms from 1917 until its closure in 1922. He would later go on to run The Grosvenor Hotel.

The Anglesea Arms was one of only four of the Wivenhoe beerhouses to survive the First World War.  However, the Licensing Committee still considered Wivenhoe to have too many pubs and beer- houses and in 1922 considered recommendations for the closure of a further four: The Anglesea Arms, The Greyhound, The Grosvenor and The Yachtsman’s.  The fact that The Anglesea had the only street lamp in the area was offered in defence of its closure, the only public house with a bath being offered for The Grosvenor Hotel. In the end The Greyhound and The Grosvenor won a reprieve. The Anglesea and Yachtsman’s were less fortunate.  Whether the light went out on Queens Road is not recorded.  The Anglesea Arms had always been designed as a pub and so was larger than its neighbours, upon closure it was split in two, becoming numbers 7 and 9 Queens Road.

In the normal course of events there probably wouldn’t be much more to add to the history of The Anglesea Arms as it became just another address in lower Wivenhoe. It does however have one final claim to fame as it was a base for the Angry Brigade in the late 1960s and early 1970s.

Universities had been the focus of protests across Europe and North America in the late s1960’s, notably in Paris and notoriously at Kent State, Ohio, where four students were killed by the National Guard.  Essex University also saw unrest, even gaining a certain notoriety.  The Angry Brigade was a UK based anarchist group that operated from the late 1960s until the 1970’s.  It was never quite in the same league as terrorist groups on the continent such as the Baader Meinhoff Gang in West Germany, the Red Brigade in Italy, or the Basque separatists ETA.  The security services however took the group seriously enough and were obviously working against a backdrop of the euphemistically named “troubles” in Northern Ireland.

Eventually eight of the Angry Brigade would be tried at the Old Bailey with four receiving sentences of up to ten years.  Four were acquitted, but later convicted of cheque book fraud.