You are here: Home>Topics>Activities of the WHG>4 Major Projects of the WHG>Wivenhoe's Pubs & Beerhouses>About The Brewery Tavern from 1868 to 1986

On the corner of Brook Street and Paget Road 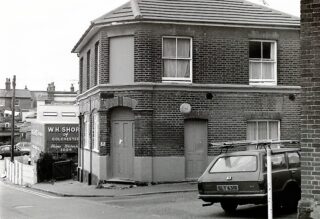 The Brewery Tavern after it closed in 1986
Photo: Wivenhoe Memories Collection 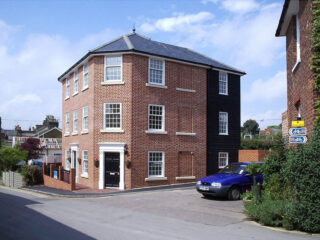 The building which replaced The Brewery Tavern.
Photo by Terry Garland 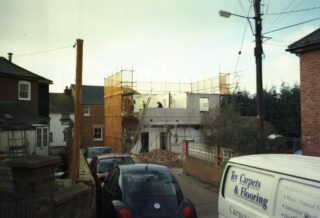 The Brewery Tavern being demolished 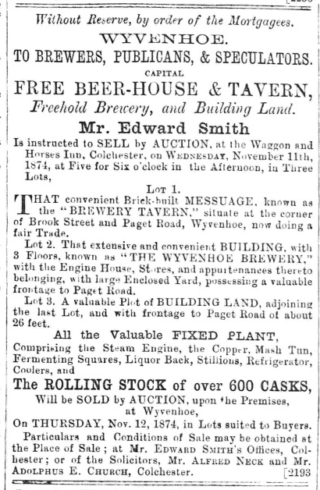 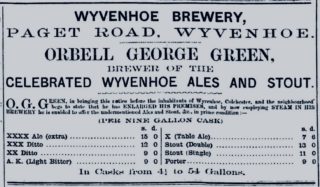 The Brewery Tavern was a beerhouse at the junction of Brook Street and Paget Road and ran from 1868 through to 1986. For a period in its life, it was also called The  Brewery Arms.


The Beerhouse Acts of 1828 and 1830 enabled householders to sell beer for consumption on and off their premises.  In the latter half of the 19th century, Orbell George Green produced “Wyvenhoe Ales and Stout” at his brewery in Paget Road. The beer could be bought at the close by Brewery Tavern.

The Tavern was conveniently situated just to the rear of the former Cook’s Shipyard, which was located to the south of Anglesea Road between 1897 and 1983.  Shipyard workers frequented the Tavern during these dates.  The Tavern accepted tokens as payment which were quite common and received by shipyard workers as part of their wages.  One is part of the Wivenhoe Memories Collection and reads “O.G. Green Wyvenhoe Brewery, 1 penny”.  This would date the token to roughly 1888.

The old brewery building, built on wooden legs, was demolished by 1965.  The Brewery Tavern itself closed as recently as 1986.  Many Wivenhoe residents will remember drinking in the Brewery Tavern, including the Wivenhoe History Group Chairman, Peter Hill, “I had my first pint in Wivenhoe at this pub in October 1972 just after Bonnie and I had married and bought our first house here”.

The Tavern was subsequently demolished and the aptly named Brewery House built on its site some years later.

The last landlord, Jack Cross, was a real Wivenhoe character, painter and local teacher, all of which were reflected in his approach to running The Tavern.  In his 1965 book “East Anglian Pubs”, Vincent Jones writes “You could hardly find a less prepossessing Victorian drink shop than this looks. It finds place here because it is a true individual pub, its character made by the quality of the drink it sells and by the man who keeps it”.

Whilst the Tavern and its original foot print are now long gone, Jones also gives us a vivid description of the Brewery Tavern and its clientele.  Again, from East Anglian Pubs, he writes “There is one small narrow bar which is called the bar/saloon, decorated in a variety of colours. It has a general air of cheerfulness and excitement. It seems always full of a mixed crowd of shipyard craftsmen, doctors, fishermen, sailing people, a painter or two, students, visitors from foreign parts. The beer comes up in good condition. You may ask for any exotic drink you fancy: Cross has his own version of Pimms with strange garnishings; or you may have a glass of Anjou, Bordeaux or Yugoslav Riesling”.

During his time as landlord, Jack with his wife Pat made The Brewery Tavern a melting pot for artists and shipyard workers.  The Tavern became a small art gallery with local residents’ paintings on the wall.

Wivenhoe resident at that time Bill Heslop recalled “All the artists’ paintings were on the walls in the Brewery Tavern, and really, the artists’ activities then were at their height.  And if there was an overflow in the pub, we just used to move into Jack’s front room, and take over that, and carry on drinking in the armchairs!”

George Gale, Fleet Street Columnist and journalist, drank in the Tavern on his way back from working in London.  George leased part of his home, Ballast Quay House, to the Arts Club.

The Arts Club was formally opened by the leader of the Conservative Party, Edward Heath, on 15 October, 1966.  Artists like John and Pamela Dan were members and exhibitors.  Pam recalls “So George Gale turned these outhouses into the Wivenhoe Arts Club.  Cleaned up and painted up and it was a beautiful job.  It comprised of a very big gallery space, beautiful gallery, which led you into a very big bar space, with tables, wooden tables and chairs”.

The end of the Arts Club came with an exhibition and party at the Old Rectory late in March, 1984.  The party is still remembered. So is the Arts Club!