You are here: Home>Topics>Activities of the WHG>Projects>Wivenhoe's Pubs & Beerhouses>About The Flag Inn (formerly The Union Flag) - From the mid-1700s 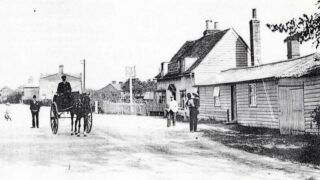 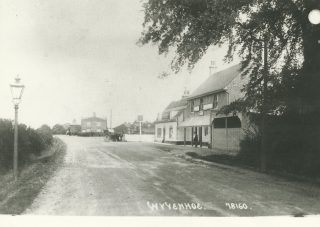 The Flag Inn in the early 1900s
From a postcard 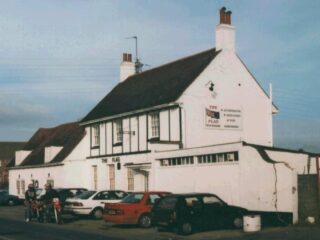 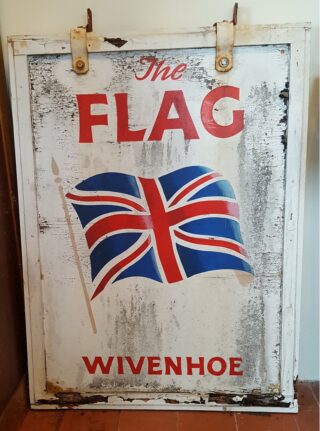 The sign from The Flag which was there in 2006
Picture by John Foster, courtesy of Wivenhoe Chapel Museum. 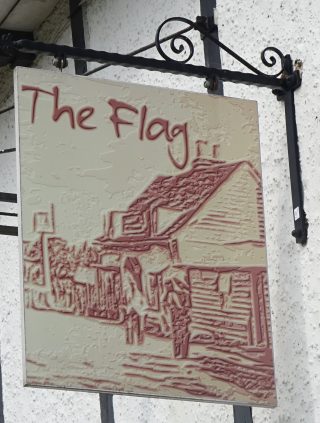 The sign for The Flag PH in Colchester Road, Wivenhoe in 2020
Peter Hill

The pub named after the 1707 Union of Scotland and England was open by 1769 and closed in 2018. For 104 of these years it was called the Union Flag. It brewed its own beer until 1911 when new owners, Daniells supplied from its own brewery. In 1958 new owners, Truman supplied beer from their Romford brewery. Since 2018 a number of plans have been proposed, including one in 2020 to provide accommodation, food and alcohol.

Often when a male landlord had another job, their wife ran the pub. Census records show them living at the pub, but with a non-publican occupation. For example the landlord from 1878 to 1895 was William Goldsmith, recorded as living at The Flag his occupation a gardener. Significantly many wives became officially landlord after their husband’s death. Elizabeth Plume took over in 1776 when her husband died and her successor, James Wyatt was succeeded on his death in 1816, by his widow Mary Wyatt.

The Wivenhoe earthquake occurred on 25 April 1884. It was reported in the Essex Telegraph the following day that ‘At Wivenhoe Cross The Flag Inn suffered from demolished chimneys’.

Jackie Lawrence writes that her uncle, Francis Edward Lawrence and his wife ran The Flag at Wivenhoe and that ‘He was born in Harwich, 1870 and died 1959 at Dovercourt’. In numerous census and trade directories a Francis Lawrence, with similar dates and personal details is living as a chicken farmer at Old Heath.

The landlord of the Union Flag is recorded in the 1901 census as Harwich born William Lawrence, living at the Union Flag with wife Julia Lawrence and their children, Richard and Laura and boarder, Priscilla Young, (domestic servant) also from Harwich. Many sources confirm that William was born in Harwich in 1865, was Flag landlord from 1897 to 1902, landlord at the Royal Oak Inn, Dovercourt, Harwich in 1911 and that he died in 1938.

London connections include, two of the daughters of Abraham Abbott, landlord from 1839 to 1845, who moved to London whilst in their 20s, Emma to Wimbledon and youngest daughter Henrietta to Walthamstow. Sarah Anne Wenden, daughter of Sarah Wenden, licensee 1855-74) moved to South London and died in 1917 in Lewisham. Kate Miriam, daughter of William Cole, landlord from 1906 to 1911, moved to Hackney. Arthur Cottee, landlord from 1933 to 1939 was born in Bermondsey.

Changes to the building

Personal memories of The Flag after WW2

Many accounts of the pub post WW2 are told in Paul Thompson’s book, Sea Change.

Eunice Baker describes how ‘in the forties when Alf Gooch kept The Flag, Ken Hodges played the piano and univox organ…to buy ‘his first television’. Records show that Alf ran the pub in 1955.

The following comments from Wivenhoe Memories Facebook page reveal other activities at The Flag in the later years.

Roy Leader, landlord from 1959 to 1987, was described by Pomlamon Morton as ‘very welcoming’ and Iris Earl says that in 1970 her German pen-friend stayed at the pub which was a Bed and Breakfast ‘as we didn’t have room to put her up and I was pregnant with my second baby‘. Pomlamon remembered that The Flag was where the ACBOA met in the 1980s. Caroline Matheson remembers going to the pub when Roy Leader was landlord and that ‘My dad used to drink there’. Bev Bond, who was born and brought up in Wivenhoe, ‘loved The Flag, my dad did too! The people were great’. Cherril Leese remembers her ‘dad, Derrick Baker was the drummer there on Saturday and Sunday night’s, along with an organist called Ken Hodges’. Wendy Martin says that it was the base for the Wivenhoe Car Club and ‘treasure hunt drives started from here’.

1989 legislation prevented large brewers owning pubs and The Flag came into the ownership of various pub companies including, the Wellington Pub Company, but struggled to remain viable. After several changes of landlord and temporary closures, it closed permanently in 2018, since when a number of plans have been proposed, including demolition and rebuilding as flats and a favourably received plan in 2020 to provide accommodation, food and alcohol.