You are here: Home>Topics>Activities of the WHG>4 Major Projects of the WHG>Wivenhoe's Pubs & Beerhouses>About The Greyhound (from 1817 - to now)

In the High Street, near to Queens Road 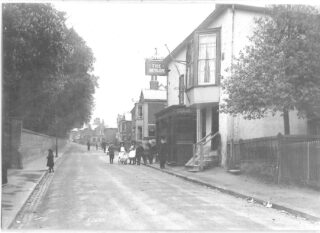 The High Street looking north. 'Circumference' Goodwin, the Attendance Officer from the National School further up the High Street, is walking to the right of the group of children. Wivenhoe Hall wall still very much in evidence.
Photo: Wivenhoe Memories Collection 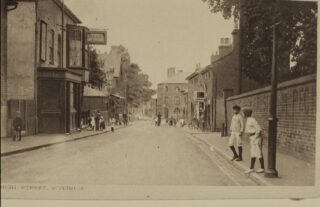 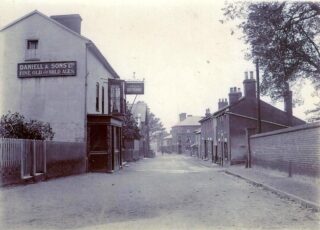 The Greyhound before the arrival of the pavement.
Photo: Wivenhoe Memories Collection 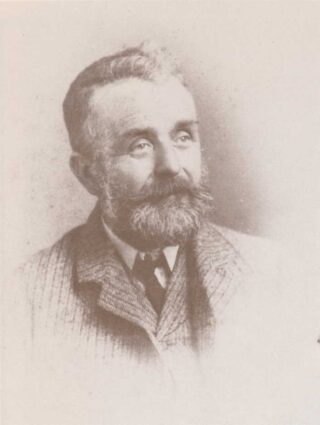 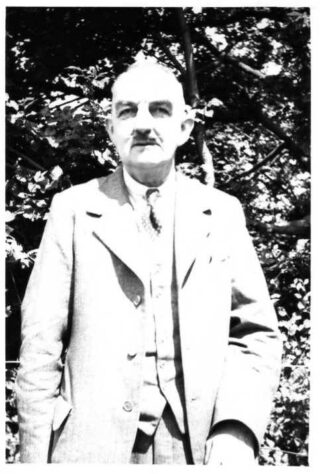 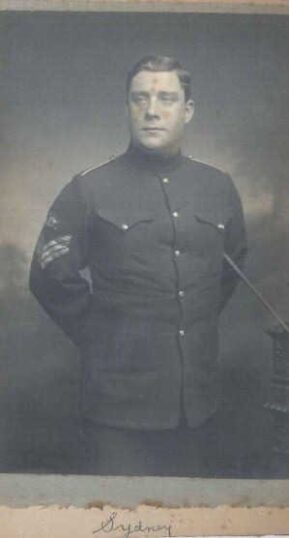 The Greyhound was the last of the traditional public houses to open in Wivenhoe, first licensed in 1817.  Many drinking establishments would follow but those that were not beerhouses could probably best be described as Railway Hotels.  The Greyhound occupies a site that is on or close to a former tavern known as The Cross Keys, although its exact location is uncertain.

The Building is Interesting

The Greyhound as it stands today clearly incorporates the third of the row of cottages that already existed on the site and date to the 18th Century.  The southern part of the building is not set at 90 degrees to the existing cottages, but rather is aligned to the street.  This may suggest that the southern section was originally built as a separate building; it is also the only part of the building to feature a cellar.  The misalignment of the two buildings can been seen to this day in the irregular shape of the corridor running between the two, this may originally have been an ally-way between the two buildings.  Some of the beams used in the construction of the southern part of the pub would appear to be re-used ships timbers.

The northern section was probably built slightly later, at which point the existing cottage would have been incorporated into The Greyhound although the front and side walls were retained and the original doorway and window can be seen to this day leading from what is now named the Snug to the main bar. The fireplace, of what once may have been The Cross Keys Tavern, is also original.

The redundant third doorway at the front is a tell-tale sign that The Greyhound was once licensed for off sales as well as on, this feature can also be seen at The Black Buoy and The Horse and Groom. The small area to the rear of the southern section was originally the kitchen. It now incorporates the stairs to the cellar but these are a recent addition and were originally located to the right of the main fireplace where the bar is now located.  The bar itself was originally located along the southern wall.

The first landlord of The Greyhound was William Dowdeswell who is named when the pub first appears in the licensing records. He was succeeded by Isaac Blyth who ran the pub from 1828 to 1836.  Isaac Blyth was originally from Boxted, he was christened there in 1777 but later moved to Wivenhoe where he married Sarah Cardy in 1809.  Isaac’s daughter, Elizabeth, would marry David Grimes the landlord of The Horse and Groom, his son, also Isaac, would go on to run The Black Boy.

The next landlord was Samuel Wade who was at The Greyhound at the start of the Victorian period before passing it on to John Powell in 1842, who ran it for seven years before James Gardner took over.  James Gardner married Jane Turpin in 1845 at St. Mary’s Church and their only daughter, Ellen, would have been born at the pub.  In 1860 James moved to The Rose and Crown and was succeeded by Berkley Harvey Sainty who had previously been at The Shipwrights which possibly gives us an idea of the relative desirability of each pub.

By the 1860s The Greyhound was facing increased competition from the numerous beerhouses that were opening up. Both The Anglesea Arms on Queens Road and The Yachters Arms were within easy walking distance and two of the new Railway Hotels, The Park and The Grosveno,r were not too far away. Berkley Harvey Sainty ran the pub for seven years before handing over to Abraham Ham.  Abraham Ham was born in 1821 in Wivenhoe, in 1852 he was charged, along with Benjamin Pittuck, Joseph Barr, Benjamin Blois and John Carter with smuggling aboard the yacht Volante which had been a cup winner at several regattas1.  Abraham was treated leniently by the bench owing to the small amount of tobacco found in his possession and was fined just 12s rather than the £5 fine handed out to some of the other accused.

Abraham married Prudence Laurance on Valentine’s Day 18472 and they had two daughters. Prudence died in 1871 aged just 46, this no doubt played a major role in Abraham’s decision to give up the pub trade as he surrendered the licence the same year.

The next landlord was David Doyland who was originally from Holbrook in Suffolk and would have been aged 55 when he took on The Greyhound. David suffered the same fate as his predecessor when he lost his wife the following year, 1872, and he remarried in 18753, his second wife being Sarah Lownes.  David himself died in 1878 at which point his widow took over as landlady in her own right.

In later years the breweries did not approve of widows running pubs and usually gave them 12 months to vacate, “the widows year”4 . This was clearly not the case in Victorian times with most of the main pubs having been run by a widow at some point in their history.  Sarah Doyland died in 1889, William Oliver is briefly recorded as landlord in 1889-90 before Joseph Brambrook Brown took over.

Joseph was born in Rowhedge in 1840 but moved to Wivenhoe later in life first being recorded at The Greyhound on the 1891 census5.  Joseph had married Emma Allen in 1863 in Poplar6, they had ten children in total, but lost three in infancy.  The Browns were one of the few families from Wivenhoe who passed down the occupation of publican from one generation to the next. Joseph’s son Joseph George, would go on to run The Rose and Crown whilst Frederick Alfred would take over at The Brewery Tavern.  Joseph continued at The Greyhound until 1910 before retiring to Park Road, where his wife passed away in 1912. Joseph died the following year at The Brewery Tavern7 so was no doubt being cared for by Frederick Alfred in his final days.

The next landlord was George Sutherwood Glozier who ran it briefly before the First World War (1911-1914). George was the half-brother of Tilford Glozier who ran the barbers shop over the road. The licence then passed to William Frank Lee.

William Frank Lee was born in 1879 in Brixton and married Elizabeth Florence Pudney in 1915 at Wandsworth. He enlisted in the Army shortly afterwards but was initially held in the reserves and was not called up until 1917. Elizabeth took over the running of The Greyhound at this point until he was demobbed in 19198.  William resumed as landlord in 1919 and is pictured in a number of photographs from that year taking part in the peace celebrations held at Ten Acres.

Call for Closure by the Licensing Committee

The Greyhound is Reprieved

William continued as landlord until 1925, he later went on to become a gauger for the brewery, travelling regularly to London by train10. (A gauger made sure that the optics gave the correct measure.)

The Greyhound now passed to Sydney Herbert Hewitt, who, like William Frank Lee, was also from London. He also spent time in the forces and was a recipient of a Royal Navy long service and good conduct medal11.  Sydney’s tenure at The Greyhound was brief, from May 1925 to December 1927, however the family that followed would run it for nearly half a century.

A Half Century of the Mawdsleys

William Henry Mawdsley was originally from Preston in Lancashire and was a printer by trade but joined the Army at the age of 18. William served with the Royal Lancers, being promoted to Sergeant in 1900 and the Staff Sergeant in 1908. He served in the Boer War and was part of the British Expeditionary Force at the outbreak of the First World War then promoted again at his retirement in 1915 at the age of 3812.  William ran The Greyhound from 1927 until his death at the age of 57 in 1933.  William’s widow, Florence Mabel then took over after her husband’s death and ran the pub for the next twenty years before handing over to her son Harry Edward Mawdsley in 1954.

The Greyhound was somewhat unusual in having such continuity at this time when many of the other Wivenhoe pubs were seeing a rapid turnover in landlords as they struggled through the great depression, the war years and the subsequent decline of the shipyards.  Harry ran the pub for the next twenty years before retiring in 1974 when the Mawdsley’s long association with The Greyhound came to an end.

1974 saw the arrival of Gerry Scott, who Colin Andrews remembers as having something of a roving eye that would eventually lead him to the divorce courts.  Thomas Smith and his wife Pat took over in 1979 and ran The Greyhound through most of the eighties and would see it through the Miner’s Strike. The 1990s would see the arrival of Jamie Alexander and then Janice Foreman, who believed the pub to be haunted.

The Greyhound is today run by Niall and Lynn Bell who are probably guiding the pub through the most troubled time in its 200 year history, the 2020 Covid-19 pandemic.