You are here: Home>Topics>Activities of the WHG>4 Major Projects of the WHG>Wivenhoe's Pubs & Beerhouses>About The Rose and Crown - pre 1760 to the present

About The Rose and Crown - pre 1760 to the present

Researched and written by Keith Bunting 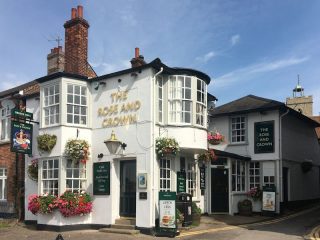 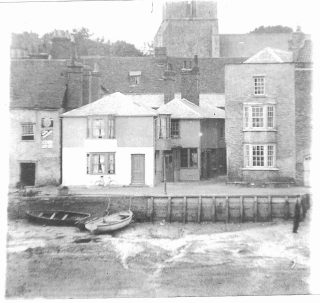 An early picture of The Rose and Crown
Photo: Wivenhoe Memories Collection 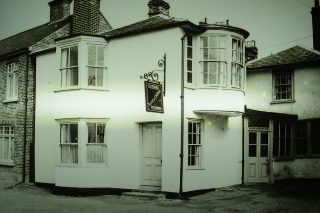 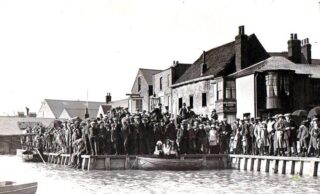 Crowds on The Quay outside The Rose and Crown
Photo: Wivenhoe Memories Collection 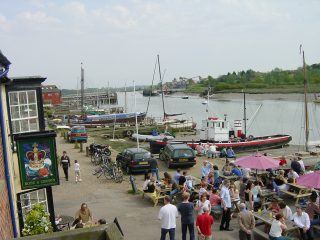 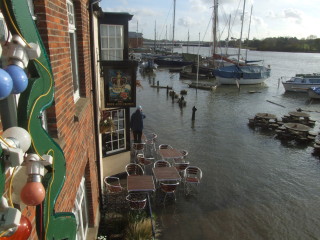 The pub was built before 1760 on part of Garrison House’s garden. Seafaring and London connections are significant to the pub. Past landlords include a ships master, seaman and sail maker. The 1800s was its heyday. Owners, Allied Breweries sold in 1989, when large brewers were barred from owning pubs. Since then it has had four owners. It is now a popular pub for summer visitors.

Ships and seafaring are significant in the pub’s history

From the early 1700s to the late 1800s the pub hosted many auction sales connected with seafaring, including sales of boats, many built and moored locally at Colchester Port or Wivenhoe. From 1782 to 1793 the pub was the registration place for boats entering the River Colne fishing smack races.

Many male licensees spent the day working in maritime jobs, such as sail maker, qualified ships master, yacht steward and ships plater. The mariners spent many nights at sea, whilst their wives ran the pub. On at least three occasions, a wife took over the licence when her husband died. The Gardner family with 40 years’ service at the pub include 15 years when Jane took over after her husband, James died. At the nearby Bull, Mrs Oakley’s successful 1892 application to take over her husbands licence said that she ‘had virtually held the licence during her husband’s life’.

The pub had many London connections

Many landlords were born in London, married spouses from London, or moved to London.  For example the landlord from 1900 to 1911, Edgar Went married Islington born Marian Roberts in 1887. As well as landlord connections, London also attracted customers. Sir John Martin-Harvey describes a customer who ‘lured to London by a daily excursion ticket… was terrified with the turmoil of Liverpool Street….remained rooted to the up-train exit… and took the next train back to Wivenhoe’. Landlady Jane Gardner’s mother lived at the pub for at least 15 years, interspersed with lengthy spells in the Stepney workhouse.

The Rose and Crown was thriving in the 1800s

ln 1832 the pub hosted the bankruptcy sale of Wivenhoe boat building entrepreneur, Philip Sainty, which included his house, shipyard, workshops, boathouse and 3 houses in Bath Street. The pub held many meetings including, for the Wivenhoe Association formed to combat rising theft.

Nick Butler in his book, “The Story of Wivenhoe”, describes ‘a group of the more important people’ meeting at The Rose and Crown to drink to the health of Lord and Lady Rebow on their 1845 Belgravia wedding day.

Sir John Martin-Harvey described ‘old sea dogs, singing their songs in the bar-parlour of The Rose and Crown’.

In common with many quayside premises, the pub held auctions of seafaring craft, large and small. Many of these craft were moored and built locally at Colchester Port or Wivenhoe. These auctions also sold houses, goods and small estates. By the 1860s sales of boats declined, whilst those of houses and land increased. The auction venues on the quayside gave way to the new hotels such as The Grosvenor Hotel and The Park Hotel

In the early 1900s beer sales at the pub declined

Billiards was introduced to the pub in 1901 to halt the decline in sales. In 1920 the pub was sold to Colchester Brewing Company who only 5 years later sold it to Ind Coope, who ceased brewing in Colchester and supplied beer from their Romford brewery. Ind Coope grew fast. In 1934 they bought Burton brewery Samuel Allsopp & Sons.

In the book ‘Sea change-Wivenhoe Remembered’, William Sparrow re-counts that his granddad, Bill Sparrow, landlord from 1944 to 1974, ‘didn’t really like any of his customers…he’d put a smile on for them and stand behind the bar listening to a lot of beer talk, a lot of rubbish’.

Peter Sainty remembers going in as a youngster and recalls ‘six old boys playing dominoes’. They’d invite him to play dominoes ‘only to get a free pint-but it was fun’.

Max Tannahill tells us that Vic Pilkington, the landlord from 1974 to 1987 would serve his regulars before the tourists. ‘He made a point of that regulars first’.

On Friday 9 January 1976,  landlord Vic Pilkington was pictured in the local paper when a chimney stack fell through the roof at The Rose and Crown during the gales which caused much damage in north east Essex.

The Miners Strike and Filming

The pub saw much activity in 1984 during the picketing of Wivenhoe Port in the miners’ strike. In May an army patrol launch, two Police launches and customs river vessels were seen regularly patrolling the river close to the pub.

In the 1990s two BBC dramas were filmed in or near the pub. The TV series ‘ Plotlands’ was filmed in 1996 at the empty Cooks shipyard, before flats and houses were built. Later that year a British sit-com ‘A Perfect State‘ starring Gwen Taylor, Richard Hope, Trevor Cooper, Emma Amos and Danny Webb was filmed in the pub. It was shown on BBC1 and ran for seven episodes from 27 February 1997.

This 1989 legislation ended the dominance of large brewers owning pubs by limiting them to a maximum of 2000 tied pubs. Many large brewers like Allied sold their pubs to newly created pub companies, which specialised in managing pubs, but not brewing beer. The Rose and Crown was acquired by Punch Taverns, who in 1999 formed Spirit Pub Company that specialised in managed pubs. Having sold Spirit to Scottish & Newcastle in 2002 and buying it back in 2006, they sold it in 2005 to Greene King, the Bury St Edmunds brewer, who were bought in October 2019 by Hong Kong based CK assets (Cheung Kong holdings).

Today the pub’s particular attraction in the summer is its location, with tables set outside on the quayside, giving superb riverside views.