You are here: Home>Topics>Activities of the WHG>Projects>Wivenhoe's Pubs & Beerhouses>About The Station (formerly The Station Hotel and The Railway Hotel) 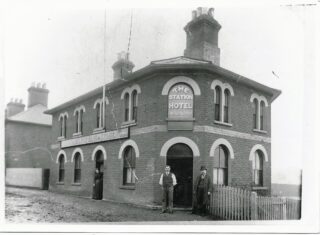 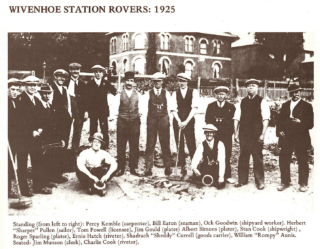 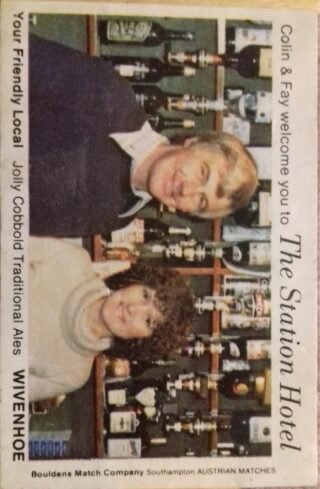 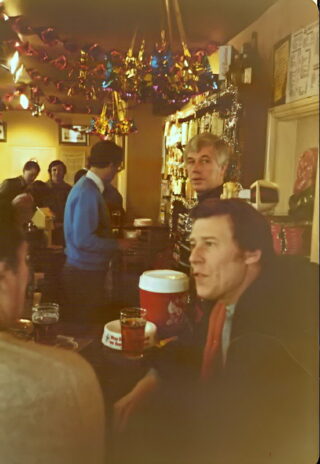 Colin Andrews (standing) in the bar of The Station pub with customers
Photo: Wivenhoe Memories Collection 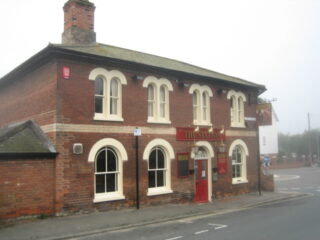 The Station pub in 2007
Photo by Peter Hill 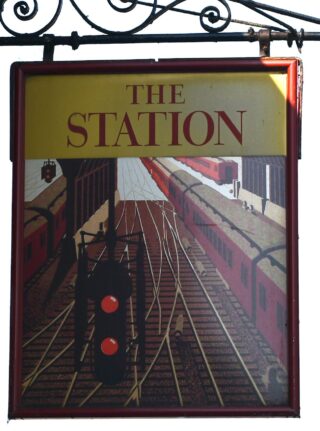 Opened in 1863, this pub’s greatest asset has been its location. Situated directly opposite the station entrance it has always had the benefit of passing trade. In the early years clientele included the local shipyard workers and when this closed there were workers from Wivenhoe Port. The hardworking landlords past and present have made sure the pub remains at the heart of community events.

The opening of The Station Hotel and the early years

The railway came to Wivenhoe on 28 May 1863. This followed the London to Colchester line in 1843, and the link from Colchester North to the Hythe in 1847.

Now Wivenhoe was accessible to people from London and all stations in between including those people wishing to visit their boats on the River Colne.

‘The new station in Wivenhoe had hardly opened before The Station Hotel 1863 and The Park Hotel 1863 appeared, likely billets for commercial travellers, and by 1866 they had been joined by The Grosvenor Hotel. (Butler 1989 page 123)

The first landlord of The Station Hotel was John Turpin.

In the 1871 census the entry for The Station Hotel is Sarah A. Cook, 34, wife plus four children and her mother. Her husband George, who was a master mariner, was recorded in the Walthamstow census as staying with Sarah’s brother Henry G. Jones. George stated his occupation as innkeeper.

It was not uncommon for licensees to have other jobs to augment the income from the pub.

Thomas Powell, a sail-maker, and his wife Alice, left their native Suffolk and in September 1894 their first child was baptised in St. Mary’s church in Wivenhoe. In 1897 he became the fifth landlord of the then Railway Hotel. They had a daughter Mabel who married James Sparling in 1924 and they lived next door in Station Road. In 1931 they had a son Dennis.

The pub had a quoits rink and in Dick Barton’s book, there is a photo on page 52 of ‘Wivenhoe Station Rovers’ taken in 1925. The person standing fifth from the left is Thomas Powell licensee and the young man with the shovel is his son-in-law James Roger Sparling, who would later become licensee.

In 1935 Thomas died and although Alice took over the licence it was Mabel and James who moved in and took over the running of the pub.

Life at The Station Hotel – The Sparlings

In 2005 in an oral history recording Dennis Sparling recalled his early years living in the pub.

A description of the pub:

“At that time the kitchen was below ground, the ground floor consisted of a small sitting room plus the pub which was bar, smoke room, parlour. There was also a snug, screened for discretion where people could bring a jug. Upstairs were four bedrooms and a club room for meetings of Boilermakers, Joiners, Railway Union and Central Club. It held 30 people and each organisation had its own tin chest with name and padlock. The family used the room on special occasions such as Christmas.

The pub had earth toilets; the night soil cart came round and emptied as required. At the back were a cart lodge and a stable with a hay loft, which was usually used for the Colchester baker’s horse. It was once used when the circus pitched on the marshes instead of the Spion Kop. It was pulled down in the 1970s.”

“During the depression of the thirties the pub income was inadequate so James, who was a boilermaker, and three men in the family sought work as a group with matching skills. They went where there was work, sometimes as far as London. The family did all the jobs in the pub. Alice still worked, and the children were pot boys and girls until they were old enough to serve. I used to deliver beer orders in a handcart on a Saturday. Lack of comfort in lower Wivenhoe homes drew men to the pub every evening 7 till 10 (closing time). Some of the customers were heavy drinkers but it was not a problem as everyone knew each other. This was certainly the case before the war.”

“Wivenhoe shipyards built ships and pontoons and there was an influx of labour. Hundreds of evacuees arrived in Wivenhoe in 1940 and a mother and two children were accommodated at the Station Hotel.

In better times after the war drinks were lined up along the bar daily for the London to Brightlingsea commuters changing for the ‘Crab and Winkle’, to drink in the 7 minutes between trains. They settled up at the end of the week.”

Entertainment at the pub

“On Sundays ‘common’ games like cards, darts, and dominoes were not allowed in the pub, so people played other games such as Tippit where a coin is passed under table. People cheated at dominoes by marking the backs with snuff. Only whist was allowed in the parlour. There was a piano in the main bar. Bill Snelling played once a week for drinks, his son played violin.  There was often singing – glee club songs like ‘Come into the garden Maud’. Uncle Alf recited poems, such as ‘The boy stood on the burning deck.”

Changes to the local area

In the early 1960s the nearby shipyard (variations of the name Forrestt) shut and in 1965 Glicksten gained permission for it to become a port, mainly importing and storing timber. In 1981 Wivenhoe Port Ltd (a part of Property Developments) took over and expanded the port importing operations to include tapioca and coal. This change in the type of imports was to have a major impact on Wivenhoe and The Station Hotel, especially in 1984.

In 1981 Colin and Fay Andrews took over The Station Hotel from Ron Chaney who had died. Fay was already working in the pub and they fancied a change, especially Colin who had been commuting for many years. They found it a lively pub with a varied clientele including academics from the university, port workers, (no shipyards now) artists Richard Chopping, Dennis Worth-Miller, Francis Bacon, Mike Heard, railway people and commuters.

On one occasion Colin had to help Francis Bacon off to London on the train and had to throw his paintings in after him. He said afterwards they could have been worth a fortune.

It was not unknown for Mike Heard’s car to be ‘disabled’ if he was not safe to drive home – he had to walk. In the morning, there was nothing wrong with his car.

Fay organised social events such as a rounders match in fancy dress on King George V field against bus drivers and conductors, for charity. They also were involved in the Wivenhoe Carnival, where the brewers provided a dray for a float. New Year was always a very big celebration. Colin provided draught beer in the early years of the May Fair. The Station Hotel was one of the pubs visited in the regatta pram race.

Games played included petanque, dominos, shove halfpenny and darts. Most pubs had a darts team and there were regular matches against local pubs and others as far afield as Fordham.

The Miners Strike and The Station Hotel

The miners strike was from the beginning of April to the end of September 1984. In Essex there were five private ports importing coal, including Wivenhoe. Miners came to picket at these ports from all parts of the country. At its peak, in May, hundreds of police and hundreds of miners were confronting each other in Wivenhoe. The miners were trying to stop the coal lorries leaving the port, the police were determined that they should. This went on for weeks.

Police, strikers and port workers all drank in the pub.

“We told them they were welcome as long as they don’t bring picketing and politics into the pub”.

“They used to rub along; we did not have any trouble – in the pub”.

The importance of relationships with the brewery and customers

Since the beginning the pub had been owned and supplied with beer by brewers Tolly Cobbold.  Colin Andrews described having an excellent relationship with them. He often visited the Ipswich brewery, and the directors would sometimes come for a social visit to Wivenhoe.

The only time there was a problem was when Colin and a coach load of customers arrived in Ipswich for a tour of the brewery and it was closed. Tolly had forgotten they were coming. Fortunately someone was found to open up and although there was no tour they did get to sample the beer so the initial disappointment was soon forgotten. For some while afterwards there were good-natured jokes about ‘not being able to organise a drink-up in a brewery’.

“You are a host, it is your house and home and you welcome them in. You look after them, introduce people to each other, if appropriate, and always wish them a ‘Goodnight’ and ‘Thank you’”.

There was a good deal of local sadness when in 1987 Colin and Fay moved on to a pub in Dovercourt.

The shipyard and port, so much a feature of the area in the past, are now long gone and in their place is a new collection of homes.

In 2008 Chelsea Coyle took over The Station from her mother and step-father, and she continues, with the help of her son, to offer a welcoming local pub.

The customers are still a mix of commuters, locals, workers and students including those with a new-found appreciation of draft (real) beer. The policy is to try and cater for everyone.

The darts team plays in the league, board games are available in the bar, the ‘Unquenchables’ gather for rugby matches on TV, and the pub is still part of the regatta pram race. They are undefeated in the regatta raft race. The car park is home to the Wivenhoe chickens.

There is a piano, guitar and bodhran available and customers are encouraged to make music. Occasionally there will be groups performing in the bar. There are Sambuca nights, which are very popular. Saturday night is party night and a good night might include customers dancing on the tables.

In 2013 the railway and The Station celebrated its 150th anniversary. The pub car park was a blaze of colour with stalls and various entertainments. Colchester Morris Men danced, and the staff put on their best Victorian clothes.

The changes resulting from the recent health crises (the Coronvirus pandemic of 2020) have been challenging, but things are working out ok. The outside decking and garden area are proving very valuable.

After nearly 160 years The Station remains a valued community pub. Long may it continue.