On The Quay, next to the British Legion building 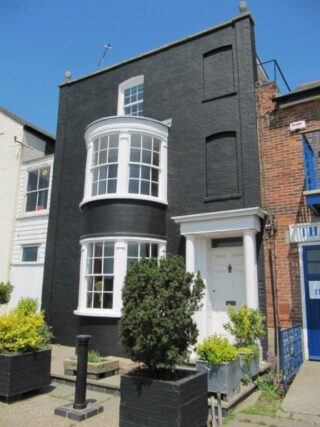 Once The Swan, now a private home called The Storehouse
Photo: Michael Smither

The Swan was situated on The Quay between the Royal British Legion building and the Nottage Maritime Institute near the bottom of Anchor Hill in a property known as The Storehouse.

Although there is very little documentary evidence it is possible that in the later part of the 1600s the Storehouse may have started selling beer brewed on the premises. There is no record of it being served by a brewery. Over the course of the early 1700s, other pubs opened and provided more diverse attractions. Even so The Swan was a Wivenhoe pub for over one hundred years.

‘‘There are title deeds to prove that The Storehouse, a private house on The Quay, was a public house in the 17th century. Originally called The Maiden’s Head and then The Maidenhead, it was later The Swan and at one time The White Swan. It is possible that the name was changed because the churchwardens, who dined there annually, thought it indelicate.’   (Butler 1989 page 29)

“A ledger records the contributions made by Wivenhovians, through its overseers, to the poor. In 1726 the ledger mentions one, Scrambler, who was at The Swan.” (Butler 1989 page 54)

The Anchor pub was open about the same time as The Swan with only a few dozen steps between them. In about 1764 The Rose and Crown opened, a few dozen steps in the other direction. At this time establishments like these were the only places people could meet to socialise or dine together.

While The Anchor and The Rose and Crown held other social activities such as society meetings, auctions and sporting matches, there is no evidence that similar events occurred at The Swan. With two bigger, competing neighbours, and The Woolpack, later The Ship at Launch, just a little further along the Quay, in the later part of the 1700s The Swan began to struggle and closed three times. Each time it re-opened with a new landlord. In 1805 it closed and never re-opened.

In the 1930s The Storehouse was used, for a time, for constructing boats. – Link to https://www.wivenhoehistory.org.uk/content/topics/people-2/the-quay

In 1944 The Storehouse was bought by Richard Chopping and Dennis Wirth-Miller. – Link to https://www.wivenhoehistory.org.uk/content/topics/arts/artists/the-visitors-book-in-francis-bacons-shadow-the-lives-of-richard-chopping-and-denis-wirth-miller

It remains a private house to this day. August 2020