You are here: Home>Topics>Activities of the WHG>4 Major Projects of the WHG>Wivenhoe's Pubs & Beerhouses>About The Yachters Arms (formerly The Brewers Arms) 1860s - c.1908

A beerhouse situated at 47 High St, north of the railway line. Now the Saffron Restaurant 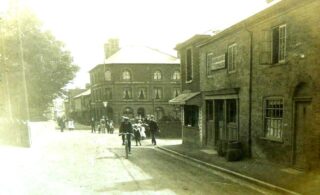 The Yachters Arms in the High Street c. 1900. It is the middle building of this row. 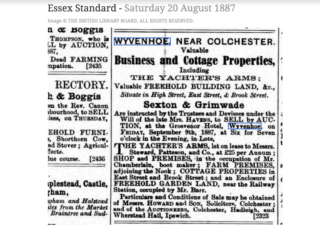 Advertisement of the auction for The Yachters Arms.
Essex Standard 20th August 1887 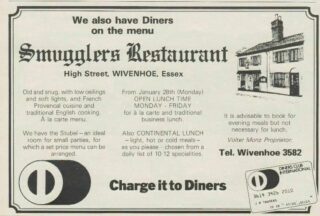 Advertisement for the Smugglers Restaurant c. 1980s. By then No 49 had become part of the property. 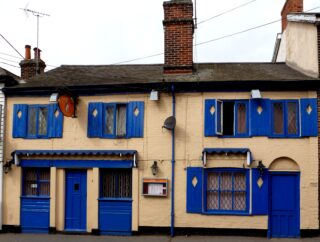 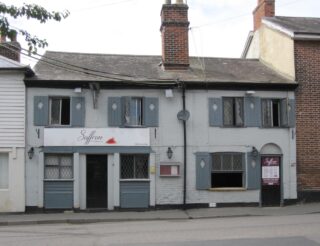 The short life of this beerhouse reflects the rise and fall of the yachting era in Wivenhoe.


The Brewers Arms was licensed as a beerhouse, and therefore not allowed to sell wine or spirits. The leaseholder was the Norfolk brewers Steward and Patteson. The 1871 census lists the occupier as Mary Anne Havens, widow, Beer House Keeper; it was common for smaller pubs and beerhouses to be run by a woman, either a widow or the wife of the landlord. Her husband, John Havens, was first recorded as the licensee in 1869. He had been a shoemaker (cordwainer) and the family had lived on Anchor Hill for many years. His decision to change his job may have been brought about by ill health as he died in early 1871, leaving his widow as licensee. It is not known when Mary’s tenure ceased but at the time of the 1881 census she is recorded as a charwoman living in East Street.

A newspaper article of August 1869 (Pubwiki) reported that John Havens was summoned for having his house open for the sale of beer during prohibited hours on 5th July. He is quoted as saying

“my son has been made a Forester today, and we have asked a few friends to supper”.

The case was dismissed.

About 1880 the name of the beerhouse was changed to The Yachters Arms which must have caused some confusion as there was already The Yachtsmans Arms at the bottom of Anglesea Road; presumably this was to attract the crews of the many yachts now coming to Wivenhoe.

A good description of the premises appears in an 1887 sale catalogue held at the Essex (ERO D/DHt TT341/5).

“It is substantially built of red brick and slated roof and contains bar, tap front keeping room, kitchen and four bedrooms. At the back is a spacious yard with entrance from the backway to the Railway Station with brick and tiled warehouse, boarded and tiled coal house, small stable shed and wood house. There is a well of good water with a pump. The property is let on lease expiring 25th March 1889 to Messrs Steward, Patteson and Co. at annual rent of £25”.

The sale took place at The Grosvenor Hotel by direction of the trustees under the will of the late Mrs Elizabeth Elsworthy Havens. The Havens family of East Donyland Hall (Rowhedge) owned a large amount of property in Wivenhoe during the 19th century and some were occupied by family members, however no relationship can be found at present between John Havens and the East Donyland family. The beerhouse was part of a swathe of land and premises north of the railway line much of which was to be sold in 1887 to pay off debts. However it cannot have sold, or was withdrawn from sale at the last minute, as Havens family documents (ERO D/P 277/6/10) show that it was still in their possession in 1902. The tenant of the property is shown as the brewers Messrs Green and King and they had probably been the tenants since 1894 when many Steward and Patteson pubs were sold to them.

But back to Kelly’s Directory of 1890 which lists Robert James Crosby as a beer retailer at The Yachters Arms. He was a Master Mariner formerly living in Anglesea Road (where many mariners lived in houses which became known as Captains Row- they had a clear view of their ships tied up at Ballast Quay). Although Robert is listed on the 1891 census at The Yachters Arms, his wife, Hannah, is described as “Publican”. He died on 9th May 1891 just one month after the census was taken.

The 1896 Essex Almanac gives William Cole as the landlord of the beerhouse and he was there in the 1901 Census. Born in 1837, he had been a fish merchant living in Wivenhoe all his life. It was common for landlords to be of retirement age as it was rare if a small pub’s level of trade could support a younger man with a family.

The beerhouse closed c.1908. In the 1970s the building became a restaurant called The Smugglers, but more recently it has been a succession of Indian restaurants, currently Saffron. At some point the uphill house next door was subsumed into No.47 so the current address is 47-49, High Street.