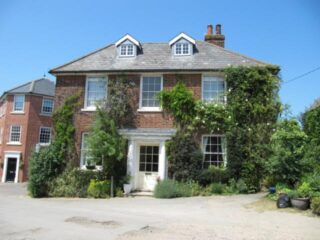 The Yachtmans Arms, was a beerhouse on Anglesea Road, built on land formerly belonging to the Wivenhoe House estate.

It is the most imposing of all the Wivenhoe pubs past and present and yet it has been one of the most difficult of the Wivenhoe pubs to research as little documentation has so far been found. Although very much part of Wivenhoe it was in the parish of Elmstead until the boundary changed in 1896.

It is situated on the lower part of Anglesea Road and would have overlooked the downstream shipyards when they were in operation in the late 19th and early 20th century.

Peter Kay in his book Wivenhoe Pubs of 2003 suggests that the building was almost certainly purpose built.

He writes that the land was sold off into lots in 1857 and it was specifically noted in the auction that this plot was ‘well calculated for an Inn’.

Anglesea Road has a row of eleven red brick houses known as Captains’ Row because many of the local sea-captains lived there.  Built circa 1863, the houses overlooked the Ballast Quay with uninterrupted views of the river to the south-east.  The road still retains its unadopted status. In ‘The Story of Wivenhoe’, Nicholas Butler states that many of the captains also owned properties in the High Street or in Belle Vue Road and that “Their wives were often obliged to keep their houses as immaculate as their boats, and, up to a point, in the same manner. Doors were picked out in gold leaf and steps covered in brass like the bows and gangplanks of the big yachts”.

Apparently the Rose and Crown public house had a ‘Captains’ Room’ situated where the bow window overlooks the Quay, and today the Black Buoy has its own Captains Room.

Peter Kay notes that The Yachtsmans Arms held a full licence. It began as a beer house then ownership transferred to Cobbold of Colchester and then finally Colchester Brewing Co.

Searches through census and licensing records allow us to put together the following list of landlords.

In 1881 Alfred Rudland, a mariner was living at an address close to the Anglesea Arms with his wife Lizzie and daughter. The 1891 census gives the address for Alfred Rudland and his family as The Yachtsmans Arms and his occupation, master mariner. This may suggest that his wife Lizzie was running the pub when her husband was away at sea. The 1901 census lists the family still in Anglesea Road but does not give the address specifically as The Yachtsmans Arms. Alfred Rudland died in 1908 aged 58. The Wivenhoe Urban District Council burial records tells us that he was buried in Wivenhoe and died at home in Anglesea Road.

Customers of The Yachtsmans Arms

We get some idea of the customers who visited The Yachtsmans Arms from the interview notes taken by Nicholas Butler when he was researching his book ‘The Story of Wivenhoe’ published in 1989.

Miss Gould recalled “The Yachtsman’s Arms, I think they used to let, I think they used to have a store there, and of course all the crew of the yachts, used to have what they called elevenses break and they all used to walk up the wall and go to the Yachtsman’s Arms…and The Brewery Tavern.   Those two pubs used to be full at eleven o’clock with yacht crews having their elevenses”.

Miss Gould recalled Mr Rudland running The Yachtsmans Arm and “Some rum rare characters too, they would get drunk, fight, make it up, and agree to meet at the pub the same time the next night”.

Alfred Isaac Rudman was the longest serving landlord of The Arms from 1890 to 1908.

The 1911 census lists Caroline Tabor as licensed victualler at The Yachtsmans Arms on Anglesea Road. Her husband George Tabor was recorded for this census as being present as watchman on the steam yacht Venetia in Wivenhoe. He lists his occupation as publican (Yachtsmans Arms). In their marriage record and in previous census information his occupation is listed as mariner. George was aged 71 at the time of the census. The role as a watchman may suggest that he was retired as a mariner.

The Yachtsman Closed in 1922

The pub licence was surrendered in 1922 and the building sold later that year for £250.  The building has been in residential occupation since that time.