You are here: Home>Topics>Activities of the WHG>4 Major Projects of the WHG>Wivenhoe's Pubs & Beerhouses>About The Sailors Return (circa 1860 -1906)

On the Quay by what is now Hardings Yard 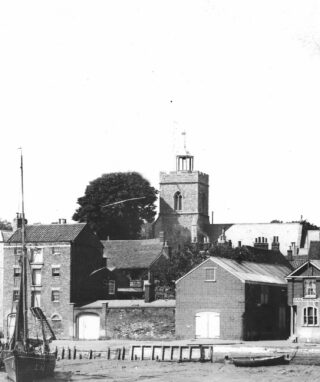 Early picture of The Quay showing The Sailors Return on the right of the picture
Photo: Wivenhoe Memories Collection 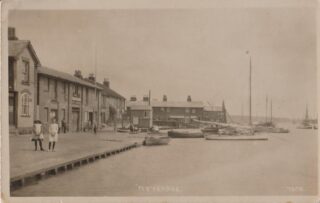 The Sailors Return on The Quay
Photo: Wivenhoe Memories Collection 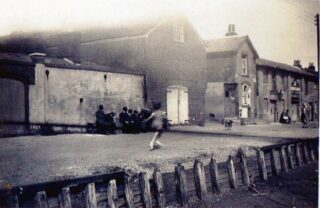 The Sailors Return on The Quay
Photo: Wivenhoe Memories Collection

The Sailors Return was one of the many beerhouses to open in Wivenhoe in the early 1860s as the village saw a large increase in building and population that accompanied the arrival of the railway.  The Sailors Return was the only beerhouse on The Quay and had a blacksmith’s shop to the rear.  In common with so many other Wivenhoe beerhouses it would not survive the Edwardian cull and was closed in 1906. One of four Wivenhoe pubs or beerhouses to be demolished, it is one of three sites that were not re-developed.

The Sailors Return opened circa 1860, one of many beerhouses and pubs to open in the 1860s as Wivenhoe saw major expansion with first the arrival of the railway and then the onward extension to the coast and the Brightlingsea branch line.  The beerhouse itself was situated on The Quay directly adjacent to Harding’s Yard and would have joined an already crowded market as there were already three pubs on The Quay: The Ship at Launch, The Anchor and The Rose and Crown, a fourth, The Swan, which had closed in 1805, was still within living memory for elderly residents.  The Sailors Return was also within staggering distance of The Black Boy and The Live and Let Live.

The first record of The Sailors Return comes in the 1861 census1 although, as with many of the returns the beerhouse was not named and Edward’s occupation was given as mariner.  Edward was 71 at the time, his wife, Mary Ann was 74.  Edward Bacon appears to have continued until circa 1866 when the Essex Almanac records that The Sailors Return had passed to Mr Ham2. However Edward Bacon is still listed as a beer retailer in the 1867 Post Office Directory so he may have moved to another of Wivenhoe’s beerhouses before retiring.

Generally beerhouses were not listed by name in Victorian trade directories, rather the landlord would simply be listed as a beerhouse keeper, it can therefore sometimes be difficult to identify the particular beerhouse in question.  The next trade directory to be published was Kelly’s in 1878, but it is not clear which of the beerhouse keepers listed was running The Sailors Return so the next known landlord was William Taylor who is recorded as such on the 1881 census6.  William was aged 60 at the time, born in Layer de la Haye and as with his predecessor is listed as a mariner. For most publicans it was usually a secondary occupation and when it came to the beerhouse keepers this was almost invariably the case.

It was normally the case with the beerhouses that the husband held the licence but the wife kept the shop so it’s probably no surprise that William is last recorded as landlord in 1886 as his wife died the same year7.

The next landlord that we know of is Mary Ann Nevard, who confusingly, is also referred to as Sarah8.  Mary Ann was born Mary Ann Marshall circa 1835 in West Bergholt, she married Josiah Nevard in 18519.  On the 1871 census the couple are shown as living in Paget Road10, which was still in Elmstead parish at the time and where Josiah Nevard is listed as a publican and journeyman brewer. The pub is not named but is known to be The Yachtsmans Arms.  By 1881 Josiah and Mary Ann had moved to Mill Road (modern day Rectory Road) where Josiah was employed as an agricultural labourer11.  Josiah died in 1890 at the age of 67, the burial register gives his occupation as a gardener and abode as Park Road12.  Mary Ann is first recorded as the landlady of The Sailors Return on the census of the following year13, or rather she was enumerated as a shirt seamstress, it would appear that even for a widow, beerhouse keeper was very much a secondary occupation.  Mary Ann is last recorded (as Sarah) as the landlady of The Sailors Return in 1895. By 1901 she was living as a boarder on Anchor Hill14. She would end her days in the Stanway Union15, probably the Union Infirmary rather than the Workhouse.

The next landlord was John Baker Summers who was born in Wivenhoe in 1836. He married Martha Long Whymark in 186216, they had 9 children and had lived in Sittingbourne, Kent for a number of years where John had worked as a blacksmith before returning to Wivenhoe.  John had returned to Wivenhoe by 1891, when he is listed as a blacksmith living on Clifton Terrace.  By 1901 he had moved to The Sailors Return, no doubt attracted by the blacksmiths shop to the rear of the beerhouse rather than the beerhouse itself. John would continue as landlord until at least 1902 before handing over to Samuel Goodall in 1906.  Samuel’s licence application was accompanied by discharge certificates showing that he had served with credit in various warships of the United States Navy.  He is one of a number of Wivenhoe sailors known to have served in the US Navy, William Oakley being of note as one of only ten Medal of Honor recipients buried in the UK.  The final landlord of The Sailors Return was William Coleman Smith who was there at its closure in the summer of 1909 receiving £27 10s in compensation, the owners, the Colchester Brewing Company receiving £270.

The pub sold for £100 in 1909, it then appears to have been a private residence for some years before becoming derelict.  Charles Gibson Schofield was summoned for failing to comply with a demolition order in July 1934, the newspaper report stating that the premises had not been fit for human habitation for ten years.

In 1953 Guy Harding founded The Colne Marine and Yacht Company and the offices, essentially a wooden hut on stilts, were erected on the site.  The offices in turn would eventually be demolished and the site is now open space partially used as a car park.

The Sailors Return is one of only four Wivenhoe pubs to have been demolished, the others being The Shipwrights, The Ship at Launch and The Brewery Tavern, the latter being the only site that has been redeveloped. It is perhaps one of Wivenhoe’s lesser known beerhouses and its site can now only really be discerned by a row of bricks to the rear of Harding’s Yard.