An illustrated talk by Peter Jones on Friday 14th October 2016 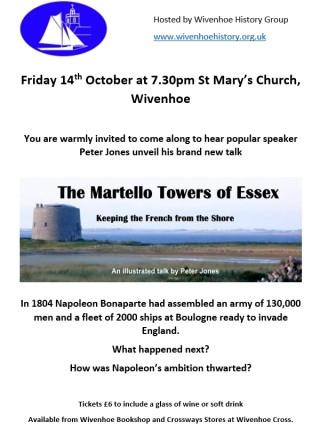 The Wivenhoe History Group’s public lecture this year is entitled the Martello Towers of Essex. It is a brand new talk by popular speaker Peter Jones and should appeal to anyone living in north east Essex.

In 1804, Napoleon Bonaparte had assembled an army of 130,000 men and 2,000 ships at Boulogne ready to invade England.  Peter Jones will explain what happened next and how Napoleon’s ambitions were thwarted.

This illustrated talk will be given in St Mary’s Church, High Street, Wivenhoe on Friday 14th October 2016 at 7.30pm. Tickets are £6 and include a glass of wine or soft drink. They are available in advance from Wivenhoe Bookshop and Crossways Stores at Wivenhoe Cross.

Report of the Lecture

We had a large crowd in St Mary’s last night for what was the History Group’s 5th public lecture. The talk about the Martello Towers covered everything from why they are called that, why the Government of the day prevaricated over the spending of the money to build them and was then criticised for spending the money when built as the French decided not to invade after all, and what has happened to all the ones built here in Essex. So an interesting talk and a sociable evening in St Mary’s with a glass of wine to finish up with.

The History Group’s Events team, led by Gill Strudwick did a good job in organising it.