You are here: Home>Topics>Activities of the WHG>Meetings of the Wivenhoe History Group>History Group meeting Wed 13th December 2017 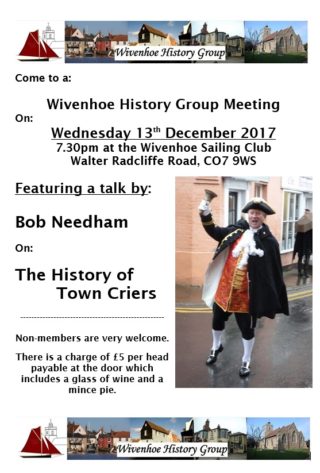 The History Group meeting on Wednesday, 13th December, 2017 was our Christmas Social. We had as our guest speaker Cllr Robert Needham to tell us about the History of Town Criers. He is of course Colchester’s current Town Crier as well as Wivenhoe’s Deputy Town Mayor for the year 2017/18.

Robert gave an excellent presentation which was thoroughly enjoyed by the 30 or so people who were present.  He showed some of the artefacts he had collected relating to the many Town Criers who had performed in Colchester’s streets.

After the meeting, everyone enjoyed a glass of wine or soft drink and a mince pie.