John Foster was the special speaker for this meeting 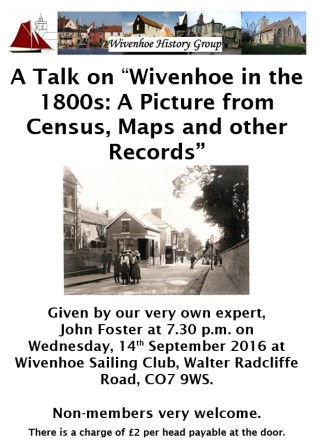 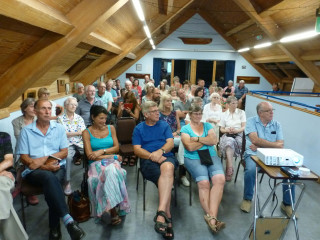 This meeting's talk proved popular with just over 50 people coming to it.
Photo Peter Hill 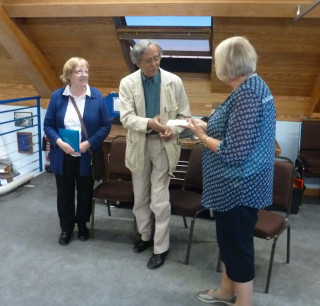 Gill Strudwick, History Group Deputy Chairman who has been leading the Roll of Honour project receiving a cheque for £375 from Frank and Gillian Baker towards the project
Photo Peter Hill 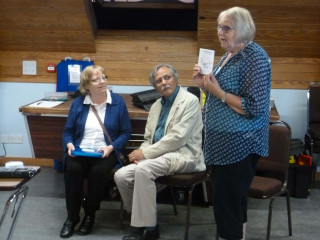 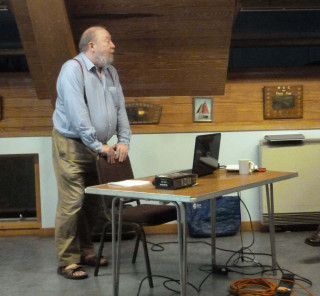 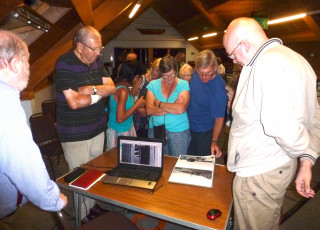 Glen Jackson who has fantastic collection of pictures of old Wivenhoe showing some of these pictures at the end of the meeting. He volunteered to come and show them to us properly in 2017.
Photo Peter Hill

This meeting of the Wivenhoe History Group took place at the Wivenhoe Sailing Club on Wednesday 14th September 2016. The subject of the meeting was Wivenhoe in the 1800s, censuses, maps and photographs.

The speaker for this evening was John Foster, who is one of the founder members of the Group and a key member of the WHG’s web site team.  John has taken a particular interest in the census information from 1841 to 1911 and has used his IT skills to write special programs which interpret the census data for Wivenhoe.  He gave a fascinating talk about his observations made in studying the census records and showed how this special software he has designed and built gives the ability to track people across different census dates and build family trees.  He also showed old maps of Wivenhoe and illustrated the changes which have taken place over the years, again using some clever computer programming.  He illustrated his talk with some photographs of old Wivenhoe taken from John Stewart’s Wivenhoe Memories Collection. Just over 50 people attended the meeting.

Before he started his talk, Peter Hill, Chairman of the History Group, introduced Frank and Gillian Baker. They had produced an illustrated booklet detailing the men of Wivenhoe who died in WW1. They started work on their booklet at the same time that Ian Valentine began researching the names of all the people from Wivenhoe who served in WW1.  The purpose of their visit to this meeting was to present a cheque for £375 to the History Group to go towards the costs of preparing the Roll of Honour and its copies.  Gill Strudwick, Deputy Chairman of the History Group who has been leading the project to get Ian’s list of 310 names typeset and printed, and to then produce them in a properly bound book in tribute to all those people who served in WW1, received the cheque and spoke to the meeting about both Frank and Gillian’s project and the Roll of Honour.