You are here: Home>Topics>Activities of the WHG>Meetings of the Wivenhoe History Group>WHG - Meeting 20th June 2019 - Colchester, Britain’s First Roman City 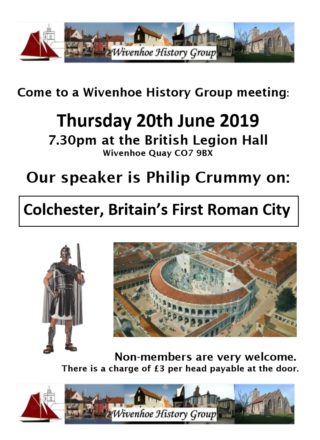 This meeting of the Wivenhoe History Group on Thursday 20th June at 7.30pm in the British Legion Hall, on Wivenhoe Quay was packed. Our guest speaker, Philip Crummy who is the Director of the Colchester Archaeological Trust, gave an illustrated talk is entitled:  Colchester, Britain’s First Roman City. It wase a very interesting evening that the 60 people who thoroughly appreciated..