You are here: Home>Topics>Activities of the WHG>About the Wivenhoe Memories Exhibitions

About the Wivenhoe Memories Exhibitions

Run by John Stewart for many years

John Stewart, one of the founders of the Wivenhoe History Group, has been staging these Wivenhoe Memories exhibitions since the 1980s. 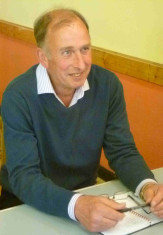 John Stewart has been collecting Wivenhoe Memorabilia for a long time and has built up an enormous collection of Wivenhoe photographs and other written material. He generally puts on a display twice each year in the William Loveless Hall, High Street, Wivenhoe, at Easter and over the August bank holiday weekend. These exhibitions attract lots of Wivenhoe residents as well as visitors from far and wide.

Lots of material came from Don Smith when Don died and likewise when Bill Ellis died, John received a lot more material. People also just drop by John’s house at The Cross and give him an assorted bundle of photographs saying “I thought you might like these”.  John is always willing to accept such contributions. He regards himself as the temporary custodian of all these photographs and material that he gets given.

A lot of the photographs used in this Wivenhoe History archive have come from the Wivenhoe Memories Collection whilst a lot have also come from the Nottage Maritime Institute, on Wivenhoe Quay.

In 2014, John received the richly-deserved “Citizen of the Year” award from Cllr Robert Needham, Town Mayor of Wivenhoe, for his contribution to the Wivenhoe community. This was a new award given by Wivenhoe Town Council to recognise contributions to the community. 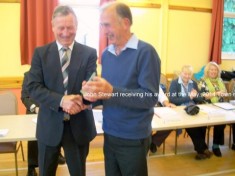 John Stewart receiving his award from Cllr Robert Needham, Wivenhoe Town Mayor. Below are pictures of the interior of the William Loveless Hall taken at the 2014 exhibition. 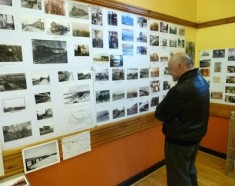 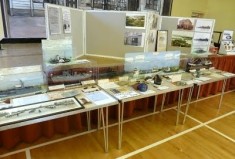 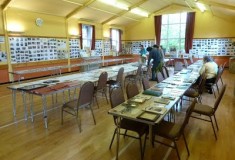 For a report on the August 2016 Exhibition – click here