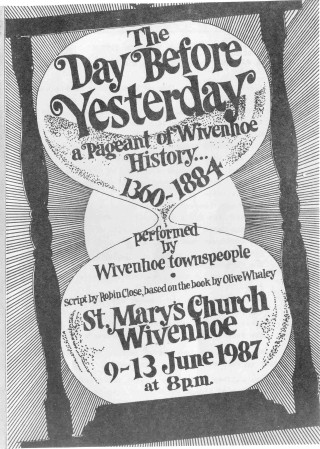 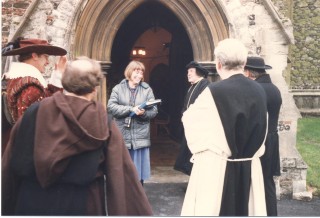 Director of the Pageant - Sheila Foster 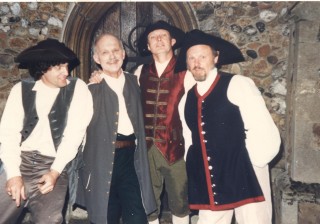 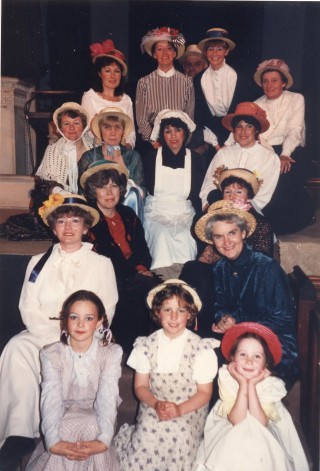 Female members of the cast 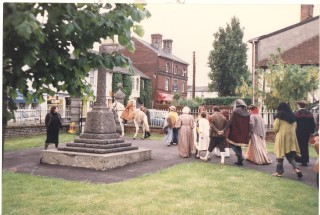 The horse led a procession of the cast, all in period costume, around the streets of Wivenhoe before each performance 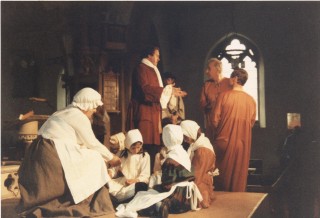 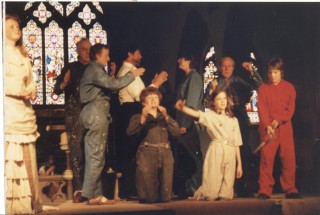 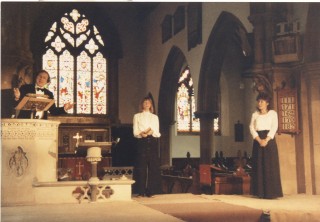 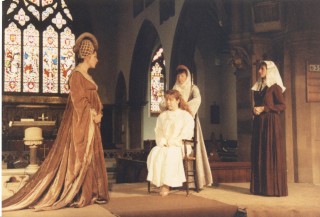 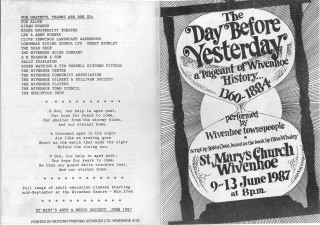 The Pageant Programme - Outside pages 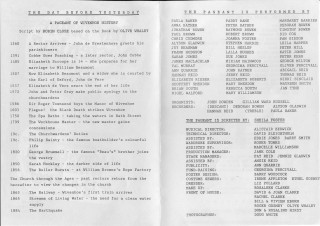 The Pageant programme - inside pages

The pageant was the best thing that happened in 1987.  Involving over 100 people it was great fun and at the end, there were pleas for more performances.  Its success was due to Director Sheila Foster.

The Pageant had a curious beginning.  I was working at the University of Essex and Juliette, a girl in my office, said her father wrote play scripts.  This led to me giving her father, Robin Close,  “The Day Before Yesterday”, Olive Whaley’s excellent booklet on the history of Wivenhoe.  It was not long before Robin came back with the script for the history of Wivenhoe down the ages in 18 scenes.

Sheila Foster, as Director, went into action producing pages of rehearsal schedules.  I would walk down the High Street asking people if they would like to be in a pageant about Wivenhoe.  James Maclachlan never let me forget this, saying he was press-ganged!  We got our 50 cast with some people playing two or three parts.

Roger Tonks, having connections with the West End Theatre, was in charge of the wardrobe.  After worrying weeks without any costumes, the day before the final rehearsal, he came up trumps bringing piles and piles of costumes, all looking as if they had come from the Old Vic or Stratford.

Stage was built inside the Church

The stage was built out from the chancel at St Mary’s Church.  Stage Managers were Pat Reid and Jennie Gladwin.  Barry Woodcock designed the poster, printed by Mike Downes.  Alistair Berwick, organ scholar attached to St Mary’s, composed a special score for the Pageant.  Weren’t we lucky!  We had script, cast, costumes, music and even a horse to walk about Wivenhoe, with a few of the cast, advertising the coming Pageant!

See pictures alongside this text including a copy of the full programme.  I can’t remember why no prompt is mentioned in the programme…who was the prompt?!