You are here: Home>Topics>Places & Buildings>Churches in Wivenhoe>History of the old Methodist Chapel in Chapel Road

History of the old Methodist Chapel in Chapel Road

Built first as a Methodist Chapel and eventually bought by the St John Ambulance Brigade through local donations, demolished in 2014 and the new building became a Potter's Workshop and Gallery.

From research underaken by Christiane Sherwen

It A Strong Tradition of Rural Nonconformity

East Anglia has upheld a strong tradition of rural Nonconformity and in the 18th and 19th centuries welcomed Methodism in all its forms. By the 19th century a split had developed between Wesleyan Methodists and Primitive Methodists. The two branches arrived in Wivenhoe and the contest began to establish a permanent place by building a chapel in which to worship.

Competition was not restricted to religious groups: two railway companies were also bidding at this time to extend the line to Brightlingsea.  Both companies began buying up land in the town. The last plots purchased were near the station, the location at which the old Chapel was eventually built. This land described as “a piece of garden ground, in the occupation of William Jolliffe, immediately adjoining the road leading from Wivenhoe to Colchester … “ The little entry now called Joliffe Yard is in the High Street, just beside Chapel Road.

From 1823 to 1871, the Wesleyans and Primitives vied with each other and their fortunes waxed and waned. Several times one or other would be on the brink of buying land for the chapel. The Wesleyans chance came when land unused by the Tendring Hundred Railway Company became generally available in January 1871. Even then there was a cliffhanger as sharp speculators made an initial confusion in the negotiation.

In every part of Britain similar small Methodists chapels can be found. They were not part of the older tradition of church building. Methodists were meeting where they could in rooms, houses, barns, or the open air. Once funds were got together, function was the driving force of the design. They were basically houses in which to meet, and to preach.

These small early chapels may differ in detail: their distinctiveness arising from availability of funds and the type of local building materials.  But like Wivenhoe’s chapel, they all have the pointed gable end and rectangular plan form. The front façade is always slightly more imposing than other sides and includes the main door(s), tall windows and the key element, symmetry. Wivenhoe’s chapel has had the two tall windows and the central bull’s eye window, which are now closed up but easily reinstated.

These chapels did not have the wealth of ecclesiastical traditional associations that are a feature of churches of older denominations. The chapel building was then seen essentially as a tool for preaching and mission, not as an object for veneration in its own right. Pure functionality was the original driving force for their design, and this is the main pattern that has continued.

23rd February 1871 saw the opening service at the chapel. The building was described as “Boarded chapel in a Brick Foundation with Slate Roof.” The total cost of construction was £162.18s.3d. The Wivenhoe Methodists had set up a charitable trust to build and maintain the chapel, a heavy legal responsibility for them. The venture was a success, and the debts were eventually repaid. As the town grew so did the membership. “A movement for the erection of a more commodious Chapel” was launched in the late 1890s, and the old chapel was put up for sale.

Around 1900, the chapel came into use as Parish Hall and continued as such even after the large Ancient Order of Foresters Hall took over for big events in 1904. Sunday School was held there and wedding parties, too. At one point, the Catholics of Wivehoe also made use of the chapel. Finally St John Ambulance took it over as a training centre in the 1960s and it was used by them and for community purposes until the early 2000s when the Wivenhoe Branch of St John closed and the building was put up for sale. It was eventually purchased and subsequently demolished to be replaced by a potters workshop and gallery. 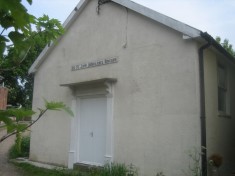 Exterior of the St John Ambulance Hall in 2011

Chronology of the Hall

1871 The Chapel was built by the Wesleyan Methodists

1871- 1901 the Chapel served the Wivenhoe Methodist community. They later bought the land to the north as well, when membership doubled in 1898, a site in the Avenue was chosen instead for a new chapel to accommodate this larger number of Methodists

1902 Stacey Wood and Arthur Garrett, grocer and draper of Wivenhoe, bought the chapel and land.

At this time, there was concern that there was no community building for families to meet. The chapel was made available for use as a Parish Hall and continued as such for small groups and occasions. Sunday School was held there and weddings celebrated. At one point, the Catholics of Wivenhoe made use of the chapel.

WW2, the hall was used as an additional schoolroom for the evacuees from Colchester.

1948 Iit was open to the public as an antique showroom and storage facility for Marjorie Dean, a local doctor’s wife.

1950s The Wood family still seem to have had an interest in the property in Chapel Road.  Anecdotal evidence from older local people suggests that the Hall was being used for weddings, children’s parties and clubs, play rehearsals and singing events.

1961 A group of local people bought the chapel including a loan from Mrs Ruth Munson (which was later converted to a donation). The Hall was donated to St John Ambulance to use as their local branch headquarters. During this period, it was used in the following ways:

– Medical centre for the inoculation of local school children

– It was regularly hired out to individuals for various local activities e.g., Wivenhoe May Fair meetings and temporary storage facility, the Gilbert & Sullivan Society for designing and painting their scenery and rehearsals, movement classes, weddings and family occasions, and a local musician had a grand piano in the hall, which was used for practice several times a week between 2002 and 2004.

Inside the Hall prior to its demolition in 2014

2007 St John Ambulance rationalised their organisation and put the Hall on the market.  The Wivenhoe Gilbert & Sullivan Society continued to use it for several months a year for designing and painting their scenery and to the In Accord Music group for their weekly rehearsals in return for them providing low-level maintenance on the building.

2012 The building was purchased by Mrs Pru Green after a long-drawn tussle with the Wivenhoe Community Trust who wanted to buy it and restore the building as a community-use building.

2014 The old Hall was demolished