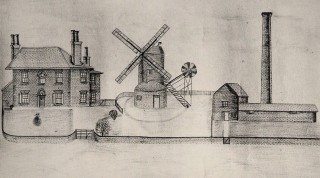 The earliest documentary evidence of a mill in Wivenhoe appears in the Domesday Book of 1086 and later references point to it being positioned on the Brook in the south/east corner of the parish on the Wivenhoe/Elmstead boundary. Although it stood on the Elmstead side of the parish boundary it was commonly known as the Wivenhoe mill.

This was a watermill, probably a little single-storey wooden building with two stones. Its purposes was to grind corn for the local population; the miller retaining a portion for his own use, as payment. It was also likely that the mill had a subsidiary income from eels and even until recent times, eels have been reported in the Brook. The mill is believed to have been located in the region of 36 and 38 Valley Road on part of the site that was later known as Bobbitts Hole. Few watermills lasted more than two hundred years and the mill would certainly have been repaired or replaced several times. In 1393 it was flooded and ruined but it must have been rebuilt as there are detailed references in Essex Record Office to the repair and maintenance of the mill in the manorial accounts of the sixteenth and seventeenth century. The last known references to the working watermill occur in the mid to late seventeenth century but long after it fell into disuse, the mill buildings continued to be shown on later maps and plans. Indeed the old mill on the Brook was referred to in the vestry minutes of 1866 and 1871, when the state of the ‘privy’ at Bobbitts Hole was deplored as contributing to the pollution of the Brook. The same unmarked buildings and the mill garden plot are also shown on the 1874 Ordnance Survey Map.

The watermill was replaced by a windmill which can be seen on the Ogilby and Morgan map of 1678. It is similarly marked on the Warburton, Bland and Smyth map of 1725. This windmill was also located on the Elmstead side of the Brook, 200 yards to the east of the site of the original watermill, high on the side of the valley (hence Valley Road) on what is now the Dene Park estate. Here it could utilise the full force of the east wind to turn the sails which powered the mill, rather than the sometimes unreliable source of water. Records indicate that this was a post mill, one of the earliest types of windmill which revolutionised the source of mill power from the thirteenth century onwards. It continued to grind corn for the local population until the beginning of the nineteenth century and is still marked on the same site on the Ordnance Survey Map of 1805.

This windmill in its turn was replaced by a second windmill, this time inside the Wivenhoe parish boundary. It was definitely on its new site at the corner of Bellevue Road and Rectory Road by 1816 where the handsome brick mill house still stands and by now had the improvement of a roundhouse added to its original structure. From this time onwards it was occupied by the well-known miller John Smith who had close connections with the brewing industry although the mill still continued to grind corn.

The Steam and Oil-Powered Mill

After 1859 when Smith retired the mill was taken over by the Mortlock family who established a prosperous baking business and also added a steam mill to the site. In 1882 the windmill was destroyed by fire but the steam mill was saved and after later being converted to an oil-powered system the mill continued until the mid-twentieth century. One local resident still remembers it from childhood as a ‘long, low series of barns which smelled lovely of grain and flour – just a wonderful countryside smell’. However by the twentieth century, new technological improvements such as Hungarian roller mills which produced whiter and finer flour, the impact of two world wars, the scarcity of skilled millers and millwrights, all reduced the role of rural mills. One of the last millers at the Wivenhoe mill was one of the female descendants of the Mortlocks who continued to work until ill-health obliged her to retire to a bungalow built on the site of the windmill.

In the later twentieth and early twenty-first century the memory of the former Wivenhoe mills lives on only in the mill associated names that are still used in the town. When new housing was built in the late 1960s and early 1970s, ‘Bobbitts Way’ was one of the names chosen for a road that ran close to where the watermill had stood. The mill fields themselves had long ago been amalgamated and subdivided to form new fields, which in their turn were submerged under successive housing developments. In 1981 Millfields School was opened in the vicinity but few people will be aware of the real history of the Wivenhoe mills that gave the school its name.

The complete article ‘Grist to the Mill: A History of the ‘Wivenhoe’ Mill from 1086 to the Mid-twentieth Century’ was published in Essex Archaeology and History, Vol 38 (2007), pp 148 – 161 and can be read by clicking on the link below.

Downloads
Grist to the Mill: a History of the Wivenhoe Mill from 1066 to the Mid-Twentieth Century (6 MB Adobe Acrobat document, opens in a new window)
Time period
1066 - 1960