Sea-Change: Wivenhoe Remembered - About the Book and the Project which began in 2004 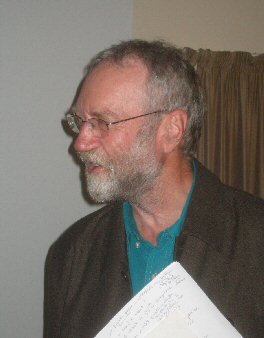 Paul Thompson, architect of the Oral History Project and Director of it.
Peter Hill 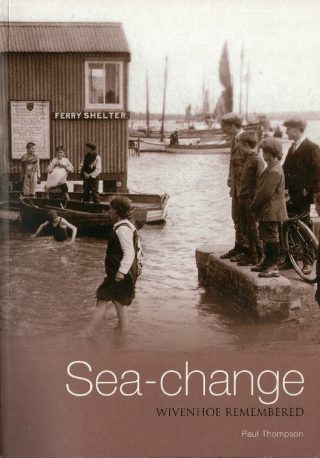 Our book and the material on this website tells the story of how Wivenhoe has changed since the inter-war years, through to the 1980s, and with reflections from present-day perspectives. In the last eighty years a small riverside industrial village of little more than 2,000 people has grown to a town of 10,000, lost most of its industry and many of its shops, but gained a community of artists and the university. This is an oral history of Wivenhoe in this time of profound change, told here through the voices of its own people, the men and women, both locally-born and newcomers, older and younger, who have experienced these transforming times.

Oral history is spoken history, and the rhythms and patterns of speech are not the same as those of written English. In editing from the memories recorded for this project, we have condensed and tightened most extracts, but we have kept the grammar and turns of phrase and lyricism of oral speech, thus keeping our texts closer and truer to the spoken record.

One of the major strengths of oral history is that it can bring in evidence from a much wider social range than is possible from written sources, bringing a variety of perspectives on the same social changes. Thus landowning families are richly documented in the record offices, but here we can have been able to bring in witness from among their domestic servants and their ploughmen. Similarly, we can match the skilled shipyard craftsman with his apprentice, the shopkeeper with the delivery boy, the clergyman with the choirboy, the yachtsman with the yachtswoman. Oral history is equally valuable in giving us an almost unique access to many hidden aspects of the history of everyday life: for example, changing work culture, or leisure activities, or the world of childhood play.

Oral history also raises the question of memory. Certainly everyone’s memory is at least to some extent reshaped over time by personal experience. Fortunately research has shown that memory is strongest and most reliable for experiences which are regularly repeated, and this includes many of the themes we cover here, such as the experiences of work or family relationships. Conversely, memories of once-only events, such as accounts of local conflicts, need to be read much more cautiously.

Sometimes, however, factual accuracy is not the main interest of a testimony. Very often stories and anecdotes are carrying a social message: such as the railway engine drivers whose off-duty tales of semi-mythical exploits tell us so eloquently of the drivers’ pride in their work skills. Other memories represent feelings and opinions, and it does not matter at all if these are different from those of other people: on the contrary, our sense of the varying experience of social change comes precisely from these contrasts.

In the chapters which follow, we look at changes in different aspects of Wivenhoe life: the farms, the riverside, factories, shops and so on. But let us begin with some overall views of the changing village, bringing out how there is no single story of Wivenhoe since the 1920s, but rather a series of perspectives, varying by age, position and experience. The first (exceptionally in this book) is from a written autobiography, Destiny Delayed, by Bill Loveless, born in 1921, whose father ran the gravel pit, and the last three from ten-year-olds are from a workshop held by the project at Broomgrove School in May 2006.

Pages on each subject can be found here by clicking on the titles below.

• Barges and the Port – Barges on the river and the demise of the Port
• Ernie Vince’s story about various boats he worked on, their owners, wartime years, life as a fisherman and much more.
• Ferries – Stories about the early ferries through to the present summer ferry
• Fishing – Changes in the lives of local fishermen
• Flood Barrier on the Colne – From 1988 rumours to its construction
• Floods – Memories of the 1953 flood
• The Nottage Maritime Institute – The founding of the ‘Nottage’ through to present day activities as a place to learn traditional boat-building and sailing skills as well as a nautical museum.
• River Colne and Ecology – Sailing, seals and birds – views of various people
• Sailing Boats – Boats with stories
• Sailing on the Colne – People’s memories of the river
• Shipyards – The Wivenhoe shipyards and people’s lives working in them
• Wivenhoe Sailing Club – Early days in 1925 to 2006
• Wivenhoe Regatta – Pull Devil, Pull Baker and other memories of the Wivenhoe Regatta
• WODs – About the Wivenhoe One Design sailing dinghies designed in 1935

3. The Pit, the Factories and the Pubs

• The Sand and Gravel Pit About ‘WG’ and the men who worked at the Pit.
• Factories – North See Canners, Alma Street Clothing Factory and others.
• Pubs – In Wivenhoe there were over 20 pubs in 1900. Read memories of landlords and other people.

The People who were involved in this Community Oral History Project

The project has been directed by Paul Thompson and administered by Brenda Corti, and the project committee have also included Annie Bielecka, Ken Plummer, Don Smith, Janet Turner, and (chair) Rev David Thomas.  Jacqueline Thomas as library representative was succeeded by Jane Stanley.

In the early months of the project there was also a parallel research group, which provided valuable historical background information, consisting of Elizabeth Baines, Ann Clarke, Pat Marsden and Janet Turner. We also were also very much helped with maritime historical information by Bill Ellis.

In launching the project we were especially helped by support from Andrew Philips and Colchester Recalled, the Wivenhoe Town Council, the Sociology Department at the University of Essex, the Friends of St Mary’s, the Sailing Club, Millfields School and Broomgrove School.

Finally, for their crucial financial support we thank the Heritage Lottery Fund for their grant of £43,000 which has made the project possible. We also received a grant of £2,750 from Professor Ivor Crewe, Vice-Chancellor of the University of Essex, which enabled us to include some interviews with early university staff members.

The Heritage Lottery Fund grant has in particular enabled the skilled transcription of the interviews by Marion Haberhauer, the production of a DVD by Steve Humphries, Andy Attenburrow and Mike Pharey of Testimony Films, and the appointment of Teresa Crompton to assist in writing the book and in the creation of this extended website selection.

The interviews will archived as be part of the `Colchester Recalled’ collection and can be consulted at either Colchester Museum or the University of Essex Library, and also at the Essex Sound Archive.