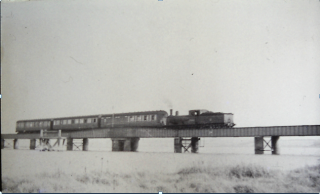 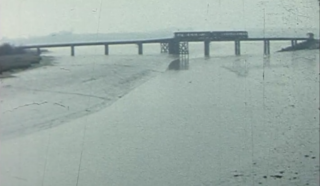 The railway bridge over Alresford Creek
Taken from the BFI film 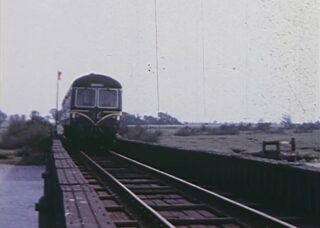 This line closed in June 1964 following the Beeching axe of branch lines.

To see the wonderful film made by Edward ‘Chib’ Thorp  of his journey on the train from Wivenhoe to Brightlingsea in 1963.  Click on this link:  https://player.bfi.org.uk/free/film/watch-river-ride-1963-online

This fim has been made publically available by the British Film Institute. It seems that the film was made by Edward Thorp, known as ‘Chib’, an undertaker from Leigh on Sea, who spent his weekends throughout the year visiting the rural railway lines in East Anglia with wife Edna and their dog Micky. Chib always took along his 8mm camera, a good supply of Kodachrome film, and a tape recorder, to document their trips. Chib would edit the film himself at home, have a magnetic stripe added to the film, and on his Kodak projector, which had a recording facility, he would record a commentary.