Early History of the Wivenhoe Allotments

The Wivenhoe Allotment & Gardens Association was formed in the early 1960s

Phil Faucheux wrote this early history of the Wivenhoe Allotments for me in 2004. I first published it on the Wivenhoe Encyclopedia at that time. Sadly Phil is no longer with us, like so many others from those early days.

The sense of community from allotment holders is still as strong whenever I have gone over there since 1983, when I first got involved as a member of Wivenhoe Town Council, and at the times I have also been a member of the Committee since then. If you have a problem on your allotment, there is always someone on hand to give some advice. A walk around the 130 allotments shows the desire to grow not just many different kinds of vegetables but lots of flowers too. Long may the allotments continue to serve the people of Wivenhoe. And let’s remember too all those stalwart members who have done so much for WAGA and the allotments since its early days. 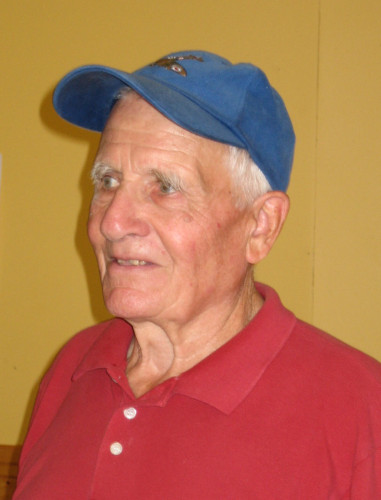 During the late 1950s and early 1960s the Vine Farm Estate was being built and in 1959 a sewer main was installed from Rectory Road to Field Way, a new road built to the north of the allotments. Field Way would become part of the main road through the estate.  The laying of the sewer damaged various allotments.  There was also a water main laid from Rectory Road to the Vine Farm Estate.

A threat to the future of the Allotments

It was obvious to me, and several other tenants of the allotments, we were under threat and likely to lose our plots to make way for more housing in what was the fast growing village of Wivenhoe.   Major Tom Burt and myself decided it was time we got together with other tenants and so we formed a committee and called ourselves the Wivenhoe Allotment Association. This later gained a little more popularity namely by joining the National Allotment Society, as it was at the time, and purchasing seeds and sundries at considerably reduced prices from the well known Seed Merchants (i.e. Suttons, Dobies, Marshalls) and selling them to our members. The trading hut at this time was my own shed at my Rectory Road house.

Many more folk came forward to support us, and joined, and our name became the Wivenhoe Allotment and Gardens Association, or WA&GA for short. With the support of one Councillor, Mr. Les Kemble, we took the Wivenhoe Urban District Council to task about the damage, and our wrecked plots were made good for use again.

The future of the Allotments secured

About this time I wrote to our M.P. Sir Julian Ridsdale for the Harwich Constituency which Wivenhoe was part of at that time. As Secretary/Treasurer, I explained to him our problem and the fear that we may lose our allotments. Sir Julian being a keen gardener himself came to see me and the allotments. His advice and help was good and so I wrote to Lord Sandford who was the Minister (of the recently formed) Environment under the Government of Harold Macmillan. The outcome from my efforts resulted in us being granted Security of Tenure for 10 years. Due to the laws regarding allotments, we are still here with our plots since 1960. 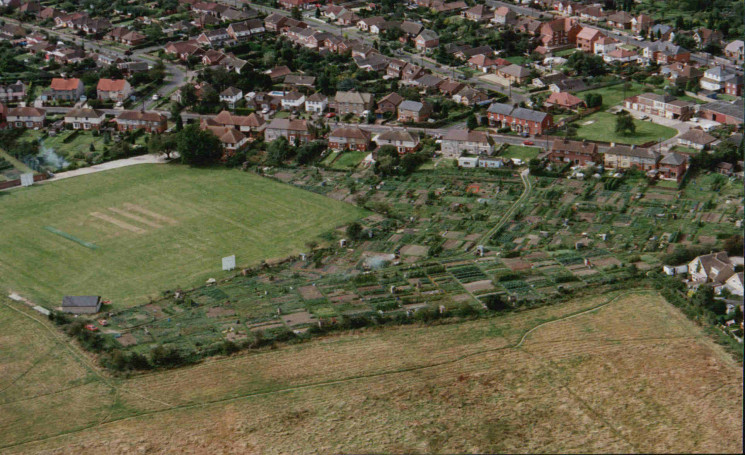 Aerial view of the Allotments in about 2004.

At that time (1960) we had approximately 25 tenants, with much of the land yet to be used, some plots had become overgrown and so I put an advert in the Essex County Standard for folk to apply for plots at the Council office. Within a year all plots were rented and we had a waiting list for plots which is ongoing to this day.

One of our good supporters was Farmer Mr. Claude Watsham of Cross Farm. I approached Claude about the state of the plots.  He quickly helped out and all the new tenanted plots to the east of the site were ploughed up and cleaned by Claude and myself.   Since that time many of the plots have been split up/made smaller to accommodate more tenants.

Over the years, through trading with seeds and seed potatoes and fertilisers at the two old sheds I had purchased with the help of builder Mr. Roly Wheeler, and with donations and subscriptions of 2/6d (12p), we decided to stage our first show in the William Loveless Hall in 1965 which proved popular and successful.

In 1966 we were able to stage the first Big Show under canvas on the large meadow to the rear of Cross Farm where once again Mr. Claude Watsham came to our assistance.  The Show was staged on the same day as the Football World Cup Final between England and Germany. We obtained a big 50 foot x 50 foot extra marquee and, with a large television screen, visitors to the Show were able to see England beat Germany 4 – 2 after extra time. Needless to say the Show was a great success that year.

Early Shows staged in a marquee off Elmstead Road

I had marked the Show out on crutches as I had been disabled for several months with broken legs and other broken bones as a result of a motorcycle accident. Also that year (1966) we had valuable help from Mr. Bernard Carter, a local businessman and a keen gardener who had joined the committee.   The following years 1967, 1968 and 1969, we staged the Shows under marquees on fields adjacent to the Elmstead Road and through the good fellowship of Major Tom Burt with his old Regiment, the famous SAS, we had parachute displays and drops on to the showground.    We had sideshows, gymkhana, motor shows and tug-o-war from the village pubs, in fact a fine day out for Wivenhoe folk.   The shows were always staged in July until, finally with the fast growing Wivenhoe, we lost our showground to the builders.

Shortage of water at the Allotments

During the earlier years 1960-1980 we had many dry spells like those more recently of 2003 and 2004 and, due to the vast excavations by the Sand and Gravel Company adjoining the allotments, our water table was drained away to the pits and our plots were dry.   It became essential that we must get a water supply and, despite some opposition again from the Wivenhoe Urban District Council, I went ahead and contacted the Tendring Water Company in 1967.

After some prolonged discussions with the Council, we finally had permission to lay a water supply. Once again, with considerable support from Mr. Les Kemble and Mr. Roly Wheeler, I went ahead and, despite further opposition the Council, with a digger manned by Mr. Bill Gladwin, also a member of WAGA, we laid the pipe from Rectory Road supply through the length of the allotment driveway and fitted four taps and posts. This took several days of my annual holiday fitting and back filling the trench.

Things change for the better in the 1970s

By 1970 many new residents of Wivenhoe were joining WAGA and were taking on plots, and the Council now allowed us to do the allocation of the plots and even collecting the rents.  Some folk who had once opposed me had now themselves joined WAGA.   With the water supply available the worry of drought had been eased somewhat.

In 1967 Peter Duffield and his wife Diane joined and became very keen members. Our two old sheds that I had used for storage and trading were no longer good enough, and so by 1970, Peter Duffield, as an expert carpenter, took on the task of building a headquarters hut for trading and storage.  Mrs Wheeler and myself, and with the help of others, we laid a concrete base. Peter made the sections of the new hut in his garden, some distance from the allotments, and so one Saturday morning with police protection we conveyed the sections to the site and erected it.

The Council by now were supporting us somewhat better and I was no longer public enemy number one.  We were established as a growing community-minded organisation.

Due to the pressure of work, and my own private life to consider, my wife and sons especially and after three different treasurers, who did not last, I was left with the double job once more.   At the next AGM I asked that the meeting should seriously elect a Treasurer who would relieve me of the double job, especially as I was Show Secretary as well.  Mr. Roy Hemstedt took over and that was a great relief for me.  He proved to be an excellent treasurer and performed in the job for well over 20 years.

In 1976, the year of a severe drought, I resigned as Secretary to become an ordinary member.  Mrs. Diane Duffield took over the position (she is still Secretary in 2005!). She and her husband have done a great job for the last 27 years.   The membership has increased annually. 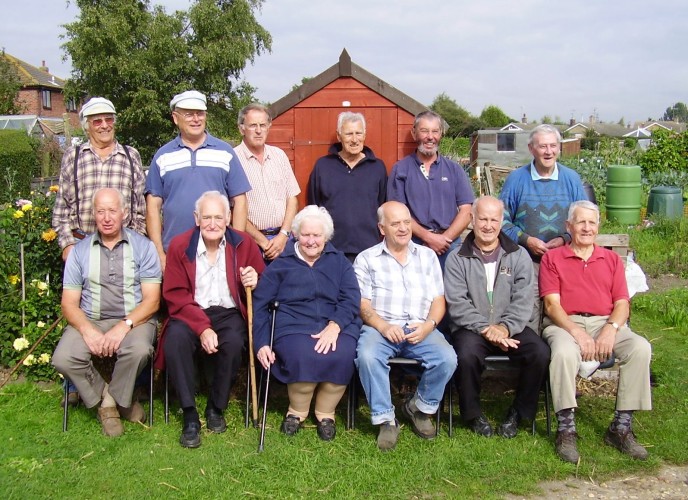 After 1980 it became necessary to build another hut, so once again Peter Duffield’s skill was put to good use and, in 1987, the year I retired from work on British Rail, Peter and I with the help of other committee members built the second hut which is, of course, the store room and work room for committee members weighing up fertilisers, seed potatoes and many other items, plus storage of tools of the gardening trade.

Our Sunday mornings are busy with a rota of committee members manning the trading hut from 10.00 – 12.00, serving the members that come from all parts of the Wivenhoe/Colchester area and villages around. In 2004, I reached the age of 80 years and may now ease up and have pleasure in seeing many younger people taking up allotments and getting interested in growing their own vegetables and flowers.

Today is June 23rd 2004 and there is a little shower of rain after a lengthy drought although that shower soon dried up in the wind. I’m very glad I laid that water main all those years ago.   We learn that parts of Scotland have had the wettest June ever recorded.  We unfortunately in Wivenhoe we have, in my opinion, the driest June recorded; let us hope July is better for rainfall.

Our Shows are now staged in Wivenhoe’s William Loveless Hall every September.  Our present Chairman Mr. David Darlington continues to do an excellent job, with Diane Duffield as Secretary, and Mr. Richard Gladwin as Treasurer, and with a lively committee, we intend to keep gardening in Wivenhoe growing.