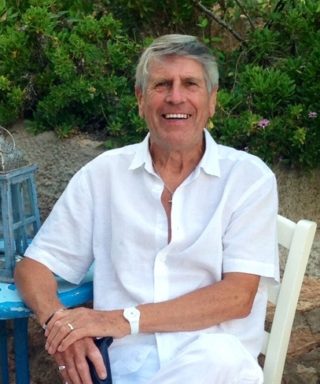 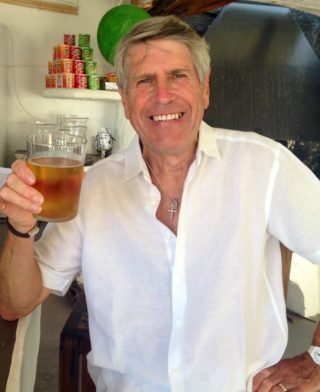 Ron Williams who sadly died in 2019 who was much liked and well respected for his helpful attitude at the Allotments.
Photo: Charley Williams

The logo for WAGA designed by Ron Williams in 2017

The WAGA Show character designed by Ron Williams and first used in the 2017 Wivenhoe Show. 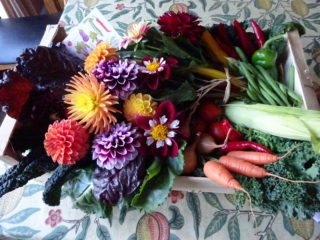 The display created by fellow Committee member, Caroline Dawson, made for Ron's funeral using flowers and vegetables taken from Ron's own allotment.

Ron Williams died on Saturday, 31st August 2019, just one week before the Wivenhoe Allotment & Gardens Association’s Annual Show.  The Show had become special to Ron and he hoped he would be one of the team who would be helping on the day of the Show, Saturday 7th September.  Earlier in the year he had made sufficient of a recovery from the cancer with which had been diagnosed in the summer of 2018 to take the lead in the preparation and printing of the Show Schedules and posters.  There is plenty of evidence of Ron’s graphic design capabilities and sign-writing skills at the Allotments in the 5 years he was a member of WAGA.

Early in 2017, when I asked him if he could design a logo for WAGA, Ron readily agreed. At our WAGA committee meeting after the Show, we agreed to adopt a little character which Ron had designed for the 2017 Show to remind us of Ron. A little character maybe, but a big personality and someone who was much liked by everyone he met.

Ron was always up at the Allotments, working on either his own plot or leading on some project or other. He was just 76 when he died. When diagnosed with cancer a year ago, he had enjoyed a life without illness.  He bore his illness with equanimity although frustrated that he couldn’t finish all of the projects that he had started. His efforts at Wivenhoe’s Allotments have been appreciated by everyone who is a present plotholder, and those efforts will be appreciated by those yet to become plotholders.

Even though only a plot holder for only a relatively short period of time, he joins that band of people who have contributed enormously to the spirit of the ‘Allotments’ that we all know and cherish.

A Tribute to Ron Williams from his good friend and WAGA colleague, Brian Reed

Ron was born in 1943 and grew up in the East End, Stratford. He met Christine in the Blind Beggar public house in Stratford, at a time when it was home and heart of the Kray twin’s domain. He moved with Christine to Hornchurch when things got rough in the East End, and became heavily involved with the Hornchurch Allotments.

A Graphic Designer by trade, Ron’s work would always have been accurate, perhaps to an annoying degree! I have several of these prototypes and originals that we now, have, to decipher.

Ron moved to Wivenhoe some 7/8 years ago and took over Plot 47 about five years ago. Ron also took over Plot 40 as well from Brian Blake.  More recently, his daughter Charley and husband Adam moved up to Wivenhoe, also from the East End, and grandson River was born two years ago.

Ron, a real gentleman, soon made many more friends locally, his jovial spirit, attention to detail and willingness to undertake any task, large or small whilst cajoling volunteers to help him along the way.  To us Allotment helpers, his plans and planning may have been over the top but when he designed something, many hours spent poring over paper with pencil and ruler, eventually gave you a plan, probably version five. One of his favourite comments was, measure twice, cut once, safety first as usual.

Well, what did Ron achieve around the Allotment site?

What did Ron grow? Well a varied mixture in a very organised rotation sequence, space was utilised to the “enth” degree and everything was carefully laid out. I’m sure in his shed there are pieces of wood specifically cut to lengths to suit every vegetable; for instance, this year, his Runner Beans were spaced exactly six inches, no more, no less against two sets of canes that were placed and secured exactly for strength and effect, a nice crop too! Onions, Garlic, Beetroot, Leeks, Lettuce, Sweet Corn and Spring Onions were fastidiously planted. Potatoes were carefully chosen and this year his Butternut Squash has been a prolific grower and he has probably still got the largest squash I’ve ever seen!

Sadly, this year Ron’s health deteriorated at such a pace he was unable to tender his plots, giving one up to concentrate on the other and that too required help from close friends to provide food for the table.

Ron was a Gold Member at Beth Chatto Gardens in Elmstead and would often be seen pottering around the gardens he loved, just like his own.

This took place at Colchester Crematorium at 10.15am on Wednesday, 18th September, 2019. The Chapel was very well attended with lots of family, friends, neighbours and of course many members of WAGA. Several of us had been asked to carry the coffin into the Chapel by Ron’s family. Ron’s son-in-law Adam Williams-Howitt joined Brian Reed and others of us in this task.  At the WAGA Committee held a week before the funeral, Caroline Dawson agreed to make a floral and vegetable tribute for the funeral.  This she did brilliantly using flowers and vegetables from Ron’s own allotment.

So Ron leaves a widow, Christine, a daughter, Charley, a son-in-law, Adam, and a grandson, River, and a great store of memories with which we can all remember this special man.