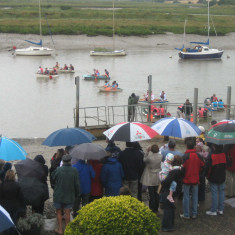 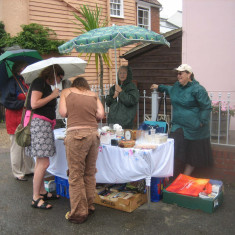 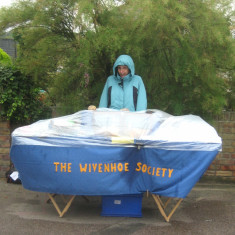 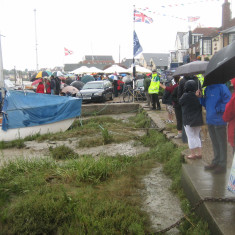 Wiv Regatta Quay. showing quite a lot of people turned out despite the poor weather
Photo Peter Hill 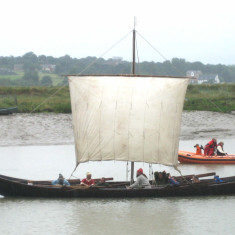 The Sae Wylfing, a half-size scale replica of a Viking long boat, which joined the Regatta this year, a sight not seen on the river for at least 1,300 years. It is based on the 27 metre longship buried in Sutton Hoo in Suffolk around 630 AD.
Photo Peter Hill 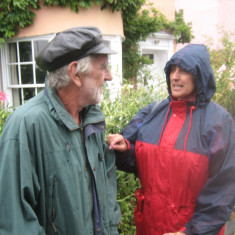 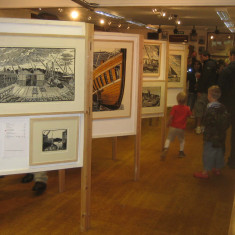 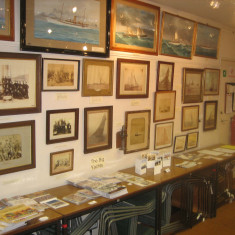 Inside the Nottage
Photo Peter Hill 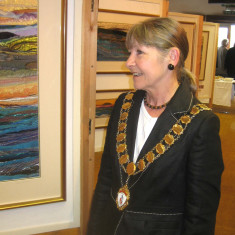 It was wet for June Market and wet too for the Town Regatta. Wet pretty much all day. Quite a few people came down to The Quay though and who enjoyed the day despite the weather, but nothing like the crowd which normally fills The Quay and beyond. What a shame for the organisers who put so much effort in to make this a special day in the Wivenhoe calendar. Still, much did happen to entertain the faithful, especially on the water.

This year’s Regatta Pram Race featured many elaborately created and decorated “Prams”.  The winning Pram was run by Jon Guy (dressed as Superman) and Peter Kerr (Batman) fashioned like a Robin Reliant in Dell-boy style!

The £50 prize money was donated to Addenbrooks. Last year’s winner (Richard Horrocks) son George is currently being treated there.  The best fancy dressed prize of a bottle of Champagne was donated by the Black Buoy pub.

A record of 8 teams entered the race. All ‘Prammers’ enjoyed themselves and all finished in good times and with minimal scratches!

Congratulations to them all.

Written by John Moores and first published in the Wivenhoe Encyclopedia

A report by Chairman of the Regatta Committee – Richard Barnard

After several years of sunshine, this year suffered the same poor weather that affected so many events this summer. After a bright and windy start to the day, the clouds soon built up and by the time the yachts and smacks were starting their races at Brightlingsea, the first rain drops were falling in an increasingly gusty and unpleasant wind.

The Quayside spectators braved the weather until mid-afternoon, but numbers inevitably tailed off after the water events had finished. The spectacle of the Sae Wylfing, a half-size replica of the Anglo-Saxon longship found at Sutton Hoo was much appreciated as she rowed and sailed past the Quay. The arrival, under sail, of the Thames Barge Reminder  was also thoroughly appreciated as she sailed majestically through the Barrier and past the Quay. The rowing and sailing races were successful and the Pub Shovel Race brought its usual mayhem and hilarity to the Regatta!

Our thanks go to all who helped organise this community event, and to those who helped sponsor it, especially the Hervey Benham Trust, who support the Smack Race. Thanks also to the Sailing Club, whose premises, safety boat and practical help is vital to the regatta.

Written by Richard Barnard and first published in the Wivenhoe Encyclopedia

Some results are below: