The Commodore that year was Frank Hodgson 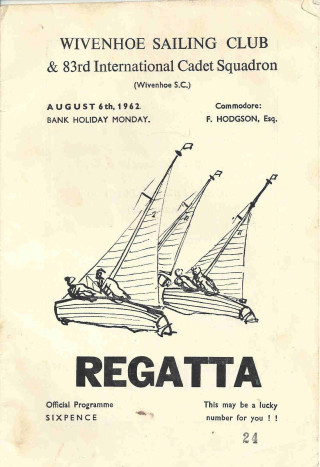 The official programme of the 1962 Regatta cost just Sixpence, or 6d as it used to be written. That is, about 2 1/2 pence in modern money. And for that you got a programme containing 36 pages!

Admittedly you got a lot of pages of adverts but they are worth looking at since they show a lot of the businesses operating in Wivenhoe at that time, a fascinating glimpse of Wivenhoe that once was.  Peatling & Cawdron sold wines and spirits from the corner of High Street and Phillip Road, and Tilf Glozier was across the road with his barbers shop also selling sweets and tobacco.

The Regatta that year was held on Bank Holiday Monday 6th August 1962.  Miss Elizabeth Paget had kindly consented to open the Regatta at 2.30pm with a salute of guns from the Club. At that time of course, the Wivenhoe Sailing Club, organisers of the Regatta, were meeting upstairs in the British Legion Hall.  Frank Hodgson, Commodore of the Sailing Club, said in his message in the programme:

‘The Wivenhoe Sailing Club has been in existence for over thirty years, and during these thirty-odd years much progress has been made.

A few years ago by kind permission of Wivenhoe British Legion we had the good fortune to acquire the use of their first floor and loft. These premises have been a great boon to the Club. We have been able to entertain members and kindred clubs in a way which would not have been possible before.

To comply with the new Licensing Laws some major alterations will be necessary to our Club House and this is going to incur heavy expenses, and, unless we can meet these expenses, the Club House will have to be closed down. It is for this reason that I ask you to support our Regatta. Please give freely; there are plenty of stalls for your entertainment. If you feel you would like to make a donation the Hon. Treasurer will be pleased to see you.’

Racing on the River

The Brightlingsea One Designs started from Brightlingsea at 2.30pm to race to Wivenhoe followed a few minutes later by the Handicap Class for boats up to 10 tons, followed by GP 14s and the Hornets. From the W.S.C. starting line, the Wivenhoe One Designs were set off at 3pm followed by the International Cadets, the Handicap Class boats and more GP 14s plus an All-in Handicap Race for the new Daily Mirror class who were racing that day for a special trophy.  10 WODs had entered for their race despite the fact that some of the WODs had left Wivenhoe for other ports on the East Coast and the Norfolk Broads.

Stalls on the Quay

There were a lot of stalls on the Quay to entertain the crowds:  Roll-a-Penny; Treasure Island; Find the Pain; Toffee Apples; Soft Drinks; Sweets; Guess an Egg; Guess the Weight of Coal; Gold-fish; Bottle Stall; Steady Hand; Fishing for Bottle and many others.

Teas were available in the Legion Hall and a Grand Raffle was drawn after the sailing prizes were presented.

Note:  This copy of the programme was kindly donated by Mr Clive Peck and the original passed to John Stewart, curator of the Wivenhoe Memories Collection.   The digitized version of the programme is available by clicking on the links below.