His memories of growing up here in the 1950s 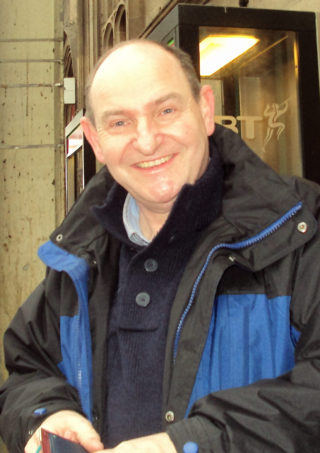 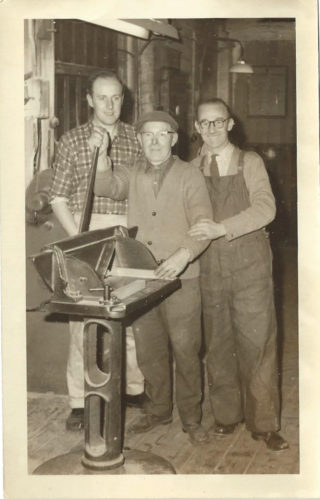 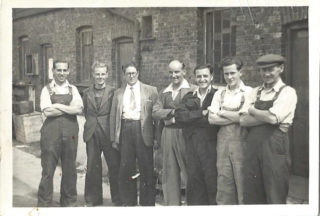 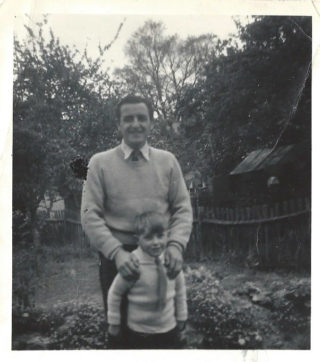 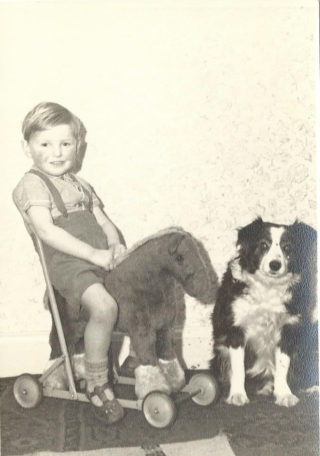 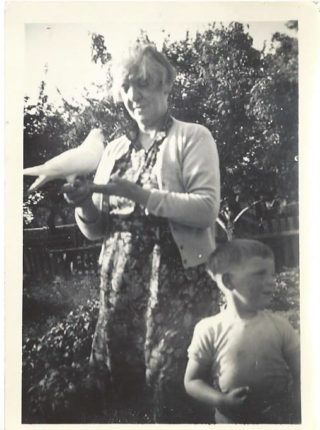 Nellie Smith, Neil's grandmother, with one of the pigeons they used to keep at the bungalow in Ernest Road
Photo from Neil Johnson 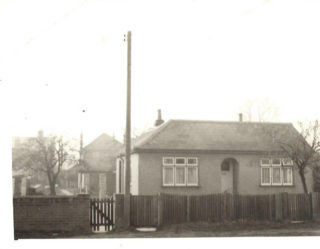 The Johnson bungalow in Ernest Road
Photograph from Neil Johnson 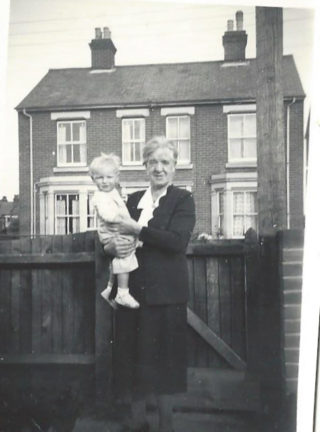 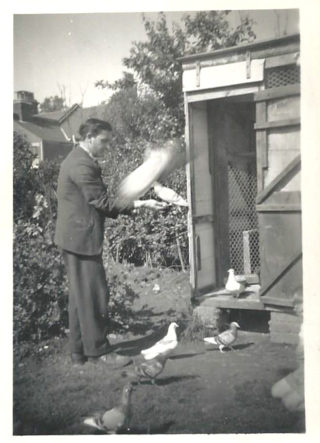 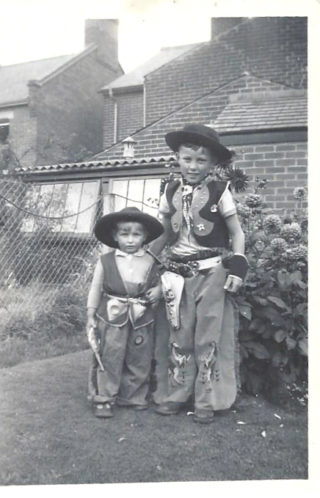 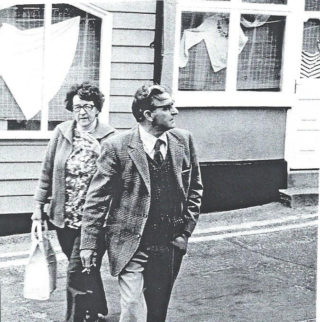 I entered life in a Colchester hospital in March 1952 and within days was living in my first home in Ernest Road in Wivenhoe. My parents, Jessie and Robert Johnson, had decided that of all places in the UK to reside, Wivenhoe was their number one choice; so perhaps I should explain the reason behind their eminently sensible and wise choice of location. Like many of their generation they had been in Wartime service and met whilst serving in the RAF – my father had joined up at a recruiting centre on Tyneside roughly about the same time my mother had walked through the doors of a similar establishment in Glasgow to enlist as a WAAF.

During the conflict, whilst my father (Robert but always popularly know as Bobby), was whisked away to Palestine, Egypt and goodness knows where else, my mother’s tour involved a varied and lengthy sample of UK locations with East Anglia featuring high on the agenda – Eastern England as many will know and in some instances still remember, was the strategic location for many air bases which ultimately assisted in saving our bacon back then. The best pal of my dear mother’s war time years was a young WAAF of the same age from a farming family who had lived on various farms around Chappel & Wakes Colne, Fordham and other similar venues within spitting distance of Colchester and its then very rural hinterland.

Whilst on many wartime leave excursions, Jessie Stevenson-Smith, originally of Clydebank, decided very clearly that when and if the conflict ceased favourably, that at least some of her future life would be in the area she always referred to as ‘The very best of England’. (Quite some tribute from a Scottish girl with a Lancashire mother). In her final years when the less well informed made derogatory comments about Essex, she got increasingly defensive on behalf of the entire County and its populace.

Upon demob, both my parents married and decided to head towards southern East Anglia and, in doing so gathered my mother’s ageing parents with them to start a new life. Their honeymoon had been in Colchester where they had searched for both a property and employment, and in doing so had chosen Wivenhoe. It was a decision that they jointly always recalled as one of the best they ever made.

The small bungalow they purchased in 1950 became their home for the next seven years. My dad who was a joiner by trade began work at the Wivenhoe Shipyard, alongside whom he always regarded as the finest set of tradesmen both in relation to the quality of their skills and overall standing as genuine, gifted, and friendly examples of humanity.

My mother and grandmother, Jessie Johnson & Nellie Smith, similarly embraced life in their new community, easily making friends and enjoying village life in what they clearly perceived as a post-war village idyll.

Neil entered the world in 1952

My own memories of Wivenhoe are an eclectic mix of mental snapshots during my very early years – and not surprisingly in accord with my now sadly deceased parental duo – they are all good ones. A haze of sun-kissed, warm and almost magical cameos of a time when life seemed much simpler but very fruitful and without any of the hints of negativity or the clouds that inevitably shadow our later years as we traverse upon life’s journey.

I remember with fondness the River Colne and the smell of salt & fresh water mixed, the Bluebell woods, Percy Chaney’s shop, the seaside trips to Brightlingsea, Clacton and Frinton, all commencing at Wivenhoe’s fine old Great Eastern Railway station, in those days, managed and marshalled by the almost legendary former Station Master Mr Perry who originally arrived from Six Mile Bottom in the Fens. In short, a whole host of fleeting cerebral images burned indelibly into the box in my brain which holds my dearest and most comforting reflections and points of recall.

My mother used to hold me over the bridge in Wivenhoe to watch the trains steam by and then on the way back home call at the shop just mentioned where the proprietor (originally a ship’s chandler, I believe) would pare me off a piece of cheese which was just coming off ration). Try explain that to kids born in the 21st century!

He grew up in Ernest Road with a fascination for trains

Since those very first viewings of trains, I have had an almost lifelong obsession with the rails and things that run upon them, which led me into over thirty years working in the railway industry. Likewise, I was totally bewitched by the paper boys delivering our ‘Daily Herald & Essex Standard’ to Ernest Road, and clearly recall begging my mother and grandmother to make and sew for me a canvass bag with straps like the ‘big boys’ so I could deliver the papers and the written word. It was some considerable years later that I became a Public Affairs manager for the British Railways Board with my primary duties involving Journalism and the media at large – who says our early lives do not influence us?

As far as Wivenhoe’s people and personalities are concerned I remember far too little, a nearby neighbour called Percy Jackson I recall as kindly and keeping budgerigars; next door to us were the Kembles’ and their son David who was a few years my senior, and a gentleman called Mr Barrell who tried to entice me to a childrens’ party with his family – I think I was too shy and sadly he failed.

At the rear of our garden behind the greengage tree and my fathers’ pigeon loft was the adjacent garden of Fred and Win Downing who I returned to visit in my mid-twenties. They had daughters called Celia and Mary and seemed a very nice family indeed. [Click here for a story and picture about Fred Downing].

In addition to my mothers’ Essex born life long wartime pal Wendy, who I came to regard as my aunt,  another lady I have always ranked with a similar status is another Wivenhoe & Rowhedge, Fingrinhoe area native who my mother quickly befriended upon reaching Wivenhoe. Yet another Wartime WAAF – Jean Millington nee Mason is the daughter of a local carpenter and has been a wonderful influence upon my life for as long as I can remember. Her eldest son Andrew, now Professor Millington, and just months younger than myself, was a boyhood friend of some note as we both departed the locality of our birth and each lived at various addresses throughout our fair land as we grew up and followed life’s journey.

Now in her nineties, living in Cumbria, this artistic, clever, kind and multi-talented lady has been an integral and positive influence throughout my entire life. Her late husband Jack was a manager in the railway industry and another positive kindly influence upon my progress. For a few years following demob (also from the RAF) he was a Booking Clerk at Wivenhoe station before promotions took him to Liverpool Street, then Grimsby Docks and ultimately Preston and a final resting place in south Cumbria. It was Jack Millington who relayed amusing tales to me of Wivenhoe’s colourful station master, the enigmatic Mr Perry and his colleague the station’s goods clerk who in his entire career never answered a letter despite the numerous heartfelt tear stained pleas of correspondents requesting just any type of acknowledgement and reply.

Jean and Jack Millington lived in Belle Vue Road which I visited twice when still very young after leaving Wivenhoe in 1957 just after my fifth birthday.  I can clearly recall the excitement of my six-year-old self, awaiting the train at Newcastle Central to take me back home!  Very shortly after, they too left the Village as a successful career in rail management enticed Jack Millington to pastures new.

As the Fifties drew to a close, our family had elected to leave Wivenhoe and head northwards; an Uncle of my father back up in the North East where he had learnt his trade, offered him a job and after considering the large family ties in the area a move up the country was made. It was a switch I think both my parents always partly regretted. Despite being back upon ‘home soil’ I genuinely feel my Dad pined for Wivenhoe the rest of his life and never ever quite came to terms with the separation. He would wistfully recall the times he spent with his former workmates and the life he left behind. As I entered my teens we moved again as a family to Derbyshire near my mother’s brother –  I can clearly recall after a few unsettling days of newness my father announcing “If it doesn’t suit us all, we’ll go back to Wivenhoe’.

As outlined, a lot of my memories are hazy, with well over half a century having passed since my departure; but every so often a snapshot of Wivenhoe enters my consciousness. On Christmas Day, just passed, my wife was extolling the glories of the season and recalling favourite Yuletide memories. My own highlight was when only four in 1956 my Dad took me for a Christmas Day walk up by Wivenhoe Cross. On our return home, an older boy was skipping along with a large multi-coloured balloon of the type you no longer see – he passed me the balloon and wished us Merry Christmas, and then continued his joyful way. I also clearly recall too sitting upon a grassy bank, on a summer’s day, somewhere in a slightly elevated position looking down upon the River Colne and watching a sailing vessel with a large billowing brown sail slowly cut through the calm brown waters – oh happy days!

On the lounge wall of my home here in Southern Scotland I have a carving of Wivenhoe’s waterfront carved by my ‘aunt Jean’s’ late father Mr Mason – taken from a replaced timber pew in Fingrinhoe’s ancient church. I also have a lovely water colour of the same scene painted by his daughter. For years, at our various homes, a print of Constable’s Wivenhoe Park always hung somewhere in the house, and for her final years, after returning to the land of her birth here in Caledonia, my mother ensured that it always had pride of place in the ‘Granny Flat’.

A yearning desire to revisit

It is now over two decades since I was last in Wivenhoe, although I have avowed to remedy that situation this year or next – my oldest pal, Andrew Millington, the other ‘Wivenhoe boy’ is planning to return to the UK to live from a ‘down under’ location – I’m firmly of the opinion that a re-union of some meaning is on the cards, or should be.

My last trip back was when a rail industry colleague journeyed with myself to purchase some pre-owned model rail equipment for his young son – he was amazed at me locating the seller’s house so quickly in view of the fact I left the Village before commencing my school days. (So was I). It just shows that our early years are of great significance and sometimes recall – I’ve learnt that big time since fostering kids.

In conclusion, I would just like to say a big thank you for whoever and whatever was responsible for introducing me to world in such a delightful location alongside so many equally delightful souls – for my part, I think the angels did a super job. Even though over eighty per cent of my life has been lived elsewhere I guess deep down I really am a Wivenhoe boy.