21 organisations benefit from the Wivenhoe Mayor's Charity Fund this year 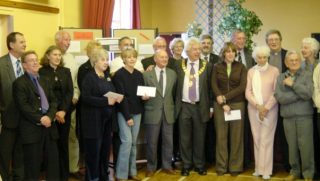 Cllr Peter Hill, Town Mayor 2004 - 2005 with all of the recipients of cheques from the Mayor's Charity Fund

21 organisations have benefited from the 2005 Wivenhoe Mayor’s Charity Fund, which has raised nearly £7,000 during the year in which Peter Hill has been Mayor.

Cheques were presented at the Annual Town Meeting in the William Loveless Hall on Thursday 12th May, 2005, by Mayoress Bonnie, and the principal organisers of the Mayor’s Charity events: Toni and Albey Stinson, Carol and Brian Green, Betsy and Les Edwards, Margaret Davies, and Lyn Pendle who with Sheila Foster, Dave and Jan Harrison, Jackie Riley and Ann Thomas organised the New Year’s Party.

Town Mayor Cllr Peter Hill and Mayoress Bonnie Hill chose the organisations on the basis of the contribution they make to the quality of life in Wivenhoe.  Several of the grants relate to young people, reflecting Peter and Bonnie’s own involvement in organisations for young people.  Other organisations were selected because of the care they provide to Wivenhoe’s growing elderly population, like the Monday Club and Over 60’s Club plus the local churches, which are benefiting for the first time from the Mayor’s Charity. Several arts organisations too are recognised reflecting this special aspect of Wivenhoe, and something Peter is keen to promote in relation to the Engine Shed Project. The War Memorial Fund received £500 to help boost the launch of the Fund the preceding Sunday. See Launch page – click here.

Money was raised from a variety of successful events ranging from a Garden Party, Teddy Bear’s Picnic, New Year’s Eve party, a trip to France and three dances, including the Mayor’s Ball in March.

Peter Hill said: “I am really chuffed that a near-record amount has been raised during my year. Bonnie and I have been really well supported by a super fund-raising team and people have been very generous.”

“It is great to be able to recognise the contributions to the overall quality of life here in Wivenhoe by so many wonderful organisations involving so many volunteers.”

The two biggest beneficiaries are The Engine Shed Project and Broad Lane Sports Ground that each receives a £1,000 and which are each seeking to raise substantial amounts of money. Peter Hill said “I hope these grants will help leverage the efforts of these two organisations to raise money from grant funders. Likewise I hope the grant towards a skateboard play facility for Wivenhoe’s younger children will help the Town Council’s efforts towards grant support.”

In January, the Mayor’s Fund sent £1,165 to the Asia Pacific Tsunami Appeal, being the proceeds of the New Year’s Eve party plus donations.

The 21 organisations sharing the remaining £5,650 are listed below: