You are here: Home>Topics>Events>Crime and Misdemeanours>Caution to Carriers: John Polley of Wivenhoe 1862 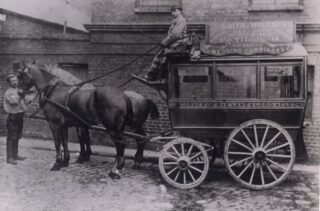 John Polley is listed on the 1861 Census for Wivenhoe as born in Great Tey but now (aged 53) living in East Street in a grocer’s shop. He is described as a shopkeeper and carrier; he is also described as a Collector of Rents. His wife Sarah is aged 52, born in Wivenhoe, and they have a daughter, Eliza Anne, aged 19, who is present and  listed as a shopkeeper. According to the parish records John and Sarah married on 24 April 1832 and had six children in between 1836 and 1842 but three of them died under the age of five. His son Charles was not present at the house during the census but he may have been working with Mr James Coppin of Colchester (an acquaintance of his father’s) who had a baker’s shop in Crouch Street, Colchester. In 1862, just one year after the Census was taken,  John has a brush with the law for both speeding and providing a service without a license which is reported in the local press:

This was not the only time that John Polley had a brush with the law as The Chelmsford Chronicle reported on Friday, 20th January 1865 that he was charged on the 16th of that month with cruelty to his horse by driving it when in an unfit condition on the 13th inst., – Sergeant Langley stated the circumstances, and the defendant pleaded guilty. – The bench fined him £1, and 11s costs, or in default 21 days hard labour.