You are here: Home>Topics>Maritime>Upstream Shipyards>A Plaque to Mark 200 Years of Shipbuilding at Wivenhoe

A Plaque to Mark 200 Years of Shipbuilding at Wivenhoe

Town Mayor unveils plaque commemorating two hundred years of shipbuilding at what has become called Old Wivenhoe Quay but was once simply known as 'the shipyard'. 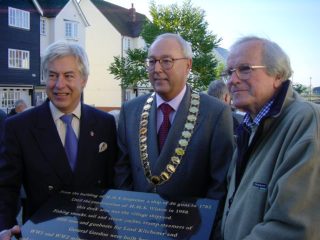 Cllr Peter Hill, proposer of the idea and who co-ordinated the arrangements standing with Town Mayor, Cllr David Craze, and Don Smith who devised the wording on the plaque. 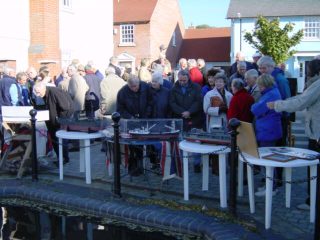 Guests at the unveiling, who included Tom Dale from Persimmon Homes who supervised the construction of the homes, admiring scale models of ships built at the Wivenhoe Shipyard and crafted by local resident Bill Ellis.

A plaque commemorating 200 years of shipbuilding at Wivenhoe was unveiled by Wivenhoe Town Mayor Cllr David Craze on Saturday 19th October at 10.30am at the dry dock, in the centre of the new development at Old Wivenhoe Quay, formerly the location of one of Wivenhoe’s two shipyards.

Developers of the site, Persimmon Homes, had responded to the request by Wivenhoe Town Council for such a plaque and agreed to erect and pay for it.

Local residents were invited to attend the unveiling ceremony. Amongst official guests, the Council invited former workers from the Wivenhoe Shipyard to attend the unveiling and then a reception in the Nottage Institute Maritime Museum, which promotes traditional boat-building and nautical skills as well as housing a growing collection of memorabilia relating to the River Colne.  The weather was crisp on that Saturday morning, 19th October, 2002, as a crowd of about 50 people turned out for the occasion.  Most of the people were former workers of the shipyard, with their wives, who had been especially invited by the Town Council.

The inscription on the plaque reads:

‘From the building of H.M.S. Inspector, a ship of 36 guns in 1782, until the construction of H.M.S. Wiston in 1958, this dock area was the village shipyard. Craft from fishing smacks, sail and steam yachts, tramp steamers of 1000 tons and gunboats for Lord Kitchener and General Gordon were built.   WW1 and WW2 minesweepers were also built and serviced, and so too were sections of the Mulberry Harbour constructed here. The yard closed in June 1961. Further history of the site and road names can be found in the Nottage Institute.’

Local councillor, Peter Hill, and proposer of the idea said “ I think it is important to remember our local history and am pleased that Persimmon Homes felt able to promote the important history of this site by erecting a plaque”.

Don Smith, a well-known local historian who provided the wording on the plaque, said “Great ships have been built at Wivenhoe over two centuries. It is good that we will be reminded of the work of generations of men in this way”